He was working on a reconciliation memorial in South Africa in 2007 when he -- along with a multimedia production firm, Local Projects -- was named lead exhibition designer for the National September 11 Museum. The museum, which will be located by the memorial pools in the World Trade Center plaza, opens in September 2012, a year after Sunday's 10th anniversary commemorations.

Hennes and the others working on the Sept. 11 museum have had to contend with issues not typical of museums -- terrible pain and the knowledge that the terrorist attack's place in history was still being debated.

Yet he was drawn to the Trade Center project by the very challenges it posed. He was moved by the complexities of the Freedom Park memorial in Pretoria, a gathering point where people are invited to envision a future South Africa free from the aftereffects of the devastating apartheid era.

"In a sense, I was applying lessons I had learned in South Africa back at home in a really important national project," he said. 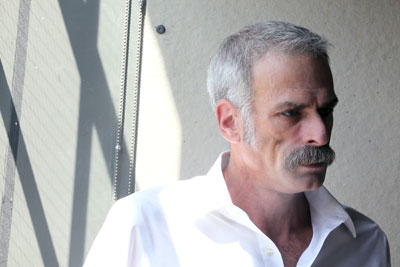 Tom Hennes at the offices of Thinc Design. (Photo by Siemond Chan)

"Something I felt acutely after 9/11 was that this country got jostled in a very severe way," Hennes said during a recent interview in his downtown offices. "And one of the things that interested me when I heard about this project was to be able to contribute to a place where different communities in the United States could gain broader perspectives on what this event meant, and what it means to us on an ongoing basis."

Hennes said his biggest priority was being sensitive while staying true to the events. Keeping the presentation straightforward turned out to be the best approach, he said.

"For the museum to take a particular position with respect to this emotion or that emotion actually could undermine the way people feel the experience," he said. "Visitors must feel the way the events are presented is valid, that it has a sense of felt reality to it and truth. So to the greatest extent possible, we've tried to let the material speak for itself."

"The pain that people had felt there is emotion enough without exploiting it," Hennes said.

He said the space of the museum itself will provide a powerful place of remembrance. Visitors will descend down a ramp to the bedrock on which the original towers stood.

A description on the museum's website says: "Visitors will be able to stand between the locations of the original Twin Towers and experience their scale, which will be referenced by two metal-clad, ethereal volumes."

Other exhibits will show objects recovered from Ground Zero, including damaged fire and police vehicles and personal artifacts left behind, as well as sections where visitors can listen to oral histories of people who were there that day. Also included in the museum will be the "Survivor Stairs," a remnant of the Vesey Street staircase that thousands of people used to escape the attack.

The result of the exercise was the decision to design the space in a way that allowed people to choose how detailed they wanted to get, Hennes said. For one visitor, it might be enough just to visit the space. Another visitor might want to spend time listening to the recordings of first responders or of the pilots on Flight 93, which was hijacked and crashed in Shanksville, Pa.

"We are allowing people to choose that depth of experience by designing it in such a way that people don't get surprised by something they didn't expect, that people can move deeper into the material and that the space signals that," Hennes said.

For example, if a space contains sensitive material, that will be indicated outside and people will have to choose to enter. Once inside, "it's not like going into a room and closing a door and not being able to get out," Hennes said. The space will include safe exits and sidelines "that allow people access to emotional relief." Tissue boxes will be placed in "strategic places where we anticipate people will need the permission to feel emotional," he said. 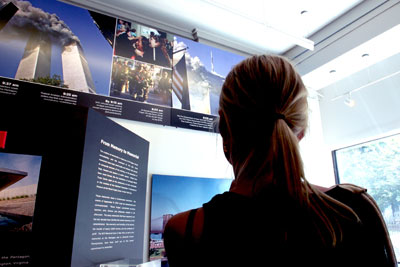 At the National Sept. 11 Memorial and Museum Preview Site on Vesey Street.(Photo by Siemond Chan)

Until the full museum opens, people can visit a preview site about the memorial and museum at 20 Vesey St., which will operate into 2012. On a recent weekday afternoon, the small space was packed with people who studied artifacts and photos and models of the pools and museum space.

Arthur Vergados, of Jersey City, N.J., said he found the experience gratifying. "It helps to put a human face on all that transpired. We remember they were our sisters, brothers, mothers and friends."