An exciting summer with a spate of newsworthy news got me sidetracked (at least that's my excuse). After three months without posts, I'm now returning and offering snippets of the book I've been writing on emerging adults, mainstream science, and mere Christianity. 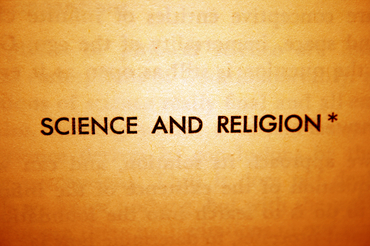 In my interviews and conversations with emerging adults (age 18-30) about science and religion, I've made one key discovery: Ancient religious texts seem outdated and therefore unscientific. Why? Scientific knowledge and technology look forward; they advance and improve. Today's iPhone is faster, smaller, more exciting, and therefore better, than when it first appeared in 2007. Religious knowledge seems to always look in the rearview mirror. Therefore religion stagnates. One reason for this stagnation, as the argument goes, is that Christianity relies on the Bible. It's old. And that simple fact distances emerging adults from its message. Moreover, how many 18-30 year olds read books written 2000 years ago? One college student I interviewed told me that he studied various sections of Bible, and it was "just bizarre."

Certainly, our understanding of the Bible does need to be updated and correlated with good science. Frankly, there are some notions that may appear "biblical," which have to be jettisoned and which were never in the Bible in the first place. (I'd choose dualistic interpretations of the body/soul relationship.) When I've read various accounts of the Galileo trial--which, incidentally was not primarily about "science versus religion" since both Galileo and his adversaries were believing Catholics--there was considerable dispute about how to interpret the Bible. Does the sun circled the earth? In Psalm 19 it's " an athlete racing to the tape," which "rises at one end of the heavens and makes its circuit to the other."

Today, I doubt many Christians would conclude that the Bible teaches geocentricism. Instead the image of the sun's running its "circuit" around the sky doesn't teach that it revolves around the earth, but metaphorically depicts what we actually see every day. In the same way, Galileo, along with Augustine somewhere around 1200 years before him, concluded that if scriptural interpretation disagreed with known science, we should revise our interpretation.

Principally, all this could be solved by a better, more nuanced, and richer approach to the Bible. Put another way, reading the Bible today sets us on a crash course with hermeneutics. But what is hermeneutics? The term derives from the Greek word, Hermes, the messenger god--just as Hermes delivered messages, so hermeneutics is about how words deliver meaning. How then does this old, old book bring meaning to a science-saturated world?

In order to respond to the issue of ancient texts and their contemporary relevance, a great deal depends on how one looks at the Bible. To paraphrase a popular creationist ministry, what "answers" are in Genesis? John Calvin commented in his Institutes, "If we regard the Spirit of God as the sole fountain of truth, we shall neither reject the truth itself, nor despise it wherever it shall appear, unless we wish to dishonor the Spirit of God" (Institutes 2.2.15). In light of Calvin's admonition--which I take to be worth following--one reason for teaching on science and its relation to Christian faith is that we need to learn natural science and follow it. And there's a strong consensus of scientists--like 98%--that sees evolution through natural selection as true. And this implies the age of the earth and universe because time is needed for this evolution to occur.

With that in mind and the dictum that "not everything that counts can be counted" (a saying ascribed to Albert Einstein, but actually from William Bruce Cameron). Not everything can be grasped by number crunching--we do not need some quantitative, empirical, algorithmic, and thus allegedly "scientific" approach to Scripture, but instead read it as God's gift to the church. In fact, we don't need some putative scientific standard as the sole criterion for hermeneutics, biblical or otherwise. The great theologian Karl Barth, who sought to counter lack of belief in the Scripture in light of early 20th century scientific obstacles, once commented that we need to find ourselves in the "strange new world of the Bible."

Could I rephrase and conclude with this? Our biblical interpretation is about learning to live within the narrative of the Scripture, to let God's story become our story. Memorizing the Bible as we do the Periodic Table is no way to treat ancient wisdom and a life-giving Word.