"Can you tell me about your family, your past?" a counselor at a Rwandan youth village for orphans happily asked one of us on our recent visit to his country. He took notes, probing as to how journalism and writing could help his young friends open up and learn about the world. When it came time for the questions about his family, though, his speech slowed and he looked toward the floor. His grandmother, killed by murderous militiamen, his sister, "violated" during the genocide, before she too was murdered. But suddenly his somber expression turned more upbeat as he glanced at his watch and said, "Ah, it's time for dinner. Let's go see everyone!"

For one week in May, we lived and worked at the beautiful Agahozo Shalom Youth Village in rural Rwanda. The youth village, located an hour outside of the capital Kigali, houses 125 Rwandan teenagers who were orphaned by the 1994 Rwandan genocide. A special project of the American Joint Distribution Committee that was officially inaugurated last month, the village provides housing, meals, education and mentorship for these orphans, many of whom as recently as a year ago lacked any semblance of a stable support system.

Our friend the counselor was not the only one having difficulty grappling with the legacy of genocide. An uncomfortable attempt at normality has settled on the villages and farms of the rolling green hills that extend for miles around the youth village and across Rwanda. The African nation now exists as a shining example of progress and modernity, packed with the sounds of its people conducting business as usual -- farmers whacking machetes into the fire-red earth, laughing kids chasing each other on the way to their local wells, the honks of speeding minibuses and motorcycle taxis filling the air.

How far has Rwanda come? A bulwark of its region, the country has emerged from an incredibly complex and unique post-genocidal reconciliation effort and is developing at breakneck speed around one national identity. Still, in some ways it appears as if Rwanda has continued its ancient agricultural routine uninterrupted for centuries. A stroll to a local market on a dusty dirt road reveals the smiling faces of villagers toiling on their patches of land, always stopping their work to say maramutse, "good morning." Yet this same dirt path is now lined with modern utility poles and cell phone towers, connecting the landlocked country to the rest of the world.

The youth village exists as a small but powerful response to an epidemic continuing to cripple Rwanda's social systems: 1.2 million orphans living on the streets -- in child-headed homes or in under-funded orphanages -- with nowhere to go. The genocide -- lasting only 100 days -- killed 800,000 people, displaced even more and ravished the countryside. An unfathomable number of orphaned children were robbed of their families, of their homes and of their communities. But even worse, they no longer had hope for a viable future.

At Agahozo Shalom, though, the dream is that one day the village's graduates will return to their communities across Rwanda and show their friends and neighbors what they, too, might eventually achieve. Whether they become doctors, businessmen, ministers in the Rwandan government or farmers, all of them will shine as beacons of hope for the scores of others like them. The village, too, can serve as a model to be replicated throughout Rwanda and around the world.

But even this safe space is strewn with fleeting -- yet penetrating -- evidence of tragedy and devastation. In the village dining hall, a common area where all meals and group meetings take place, a large purple banner hangs in memory of the genocide and the family members lost. Or, more unexpectedly, a quick, innocent turn of a staff member's head reveals -- ever so briefly -- a 10-inch-long scar from the swipe of a machete. The abruptness of such reminders is often shocking, poignantly preventing anyone from forgetting that the genocide took place unbelievably recently.

Meanwhile, more formal hints of the extermination pervade the country's picturesque landscape. White crosses draped in purple sashes stick out in ubiquitous local memorials. Nearly every village seems to have a monument to the tragedy, an indication of the universal impact the genocide had across Rwanda.

As outsiders, and especially as short-term visitors, it is particularly difficult to understand how one could ever move on in any way from what happened. And yet, on a hilltop overlooking a gorgeous lake in the southeast of the country, orphans trudge up to their morning classes, play soccer after school and struggle with algebra homework. They repeat this routine every day with the hope of someday living a fully normal life in a completely normal country. Life goes on because it has to. 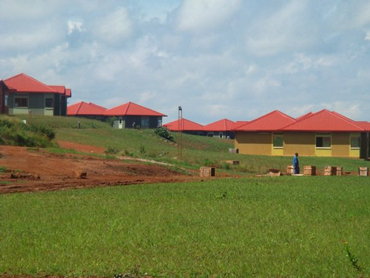 What was most encouraging was the speed by which the youth have formed very close relationships. In a country and a community where family units have become disjointed -- distant cousins replacing brothers and sisters, friends or neighbors taking the place of parents -- new "families" at Agahozo Shalom have thrived as examples of adaptation. We visited a "family" that consisted of 16 girls and a "mother" figure. This group of people -- strangers before meeting in December -- has truly become a viable family. We saw them hug each other like they had grown up as sisters, laugh like they had known each other for years. For orphans who likely lacked a routine and stability in the past, this village finally gave them the sense of home and security they needed to thrive.

Agahozo Shalom helps these children to learn to deal with the legacy of genocide, their emotions and the feelings and loss with which their country continuously struggles. Listening to the orphans' rap songs describing the importance of family, or looking at beautiful murals of homes and family that no longer exist, we saw how the village provides an outlet for their pain and suffering that they might not have been able to receive elsewhere. As a result, they are able to move on, at least to some extent.

Still, these kids are haunted by their past nearly every day. A memorial ceremony a few months ago aroused intense emotions in many of the students, with some experiencing terrible flashbacks to the moments they and their families were hunted 15 years ago. "I am longing to meet you, my lovely parents," reads their school anthem. "I am missing my lovely parents."

But the orphans, too, are pushing forward. They have no other choice. Their typical Rwandan pragmatism and hope comes through at the close of that same school song: "Not all people are bad. Now I have got other parents, who welcomed me. ... Please let's join hands together to thank them for the wonderful love they show us."