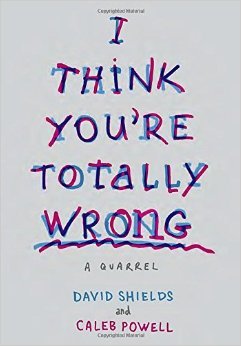 Two writers argue. In the Woods. For a Week. And they record everything.

From this intriguing premise, David Shields and Caleb Powell produce a fascinating reality-show romp of a new book, and -- two years later -- a movie based upon the book (with James Franco directing), both called I Think You Are Totally Wrong: A Quarrel (Knoph).

The book is the edited transcript of Shields' and Powell's discussions -- in the car, in the cabin, in the woods -- on everything from My Dinner With Andre, to Powell's accidental dalliances with transvestites, to Shields' complex relationships with family and fiction. The film, written by the pair, and starring them -- with healthy doses of Franco (best in a fourth-wall-breaking meta-moment) -- is an adaptation of the book and the experiences on which it is based.

Franco was Shields' student in Warren Wilson College's MFA, read the book, and wanted to make a film. I asked Shields to what extent does the film -- complete with this director, who famously plays with notions of authenticity -- disrupt the apparently documentary ethic of the book?

"For the movie, Caleb and I wrote a screenplay, treatment, beat sheet, scene sheet, etc.," Shields said, "and then on the first day an argument broke out among Caleb and James and me, so we threw away the script and let the argument play out -- which argument was/is a perfect embodiment of the life-art debate that is the core of the book (and now, too, of course, of the movie)."

This core is a (faux) battle between the art-obsessed Shields -- so fixated on his next book that he's forgotten to live -- and Powell, in the opposite corner -- full of travel and perspective, but a so-far-unsuccessful writer. They inhabit these positions the way red or blue states express monolithic political ideology, but it's a useful and delightful conceit. Shields can free himself from a semi-mid-career existential crisis and Powell can push back against a former teacher whose values are so effete and disconnected from life as to be almost irresponsibly thin air.

That both the book (January 6) and film (now being considered for the Berlin Film Festival) will drop this spring suggests that the two synchronous works comment on each other, although the film was made two years later. The near-simultaneous release upsets notions of film, fidelity to narrative and narrative itself. Quarrel is a meta-project that goes one step beyond.

In fact Quarrel is post-meta to the extent that we're beyond even post-irony. At some point the spiraling levels of multileveled commentary collapse under its own weight. The mess, the remains, the cuts of Quarrel -- that's the excitement. But it's all structure and wire and scaffold, no meta(physical), or meta-critical apparatus clearly or poorly defined.

I separated these two raging tigers and asked them the same three questions.

Schneiderman:: If Caleb is totally wrong, are you completely right?

Shields: I don't think of Caleb as totally wrong. If I didn't, I wouldn't have done the book with him. He's my alternative self, shadow self, doppelgangster. That said, I disagree with him about stuff -- about life/art stuff and about how the business of literature is to blow shit up.

Schneiderman: If David is totally wrong, are you completely right? About what?

Powell: We're not at antipodes, despite the title. If I were to come up with a true life/art battle, it'd be me versus my wife, who has no desire to be an artist and is all about life. And David never veered...It's the age-old subjectivity and relativity shtick. His approach to life and art are right for him, and same with me. One of our bigger disagreements is about the worth of artists like De Kooning, Rothko and Pollock. He finds Rothko incredible. We're arguing through each other, but it's one of those things that will never be settled.

Another big disagreement: I think an artist can't be too much of an observer at the expense of being a participant. A commitment to life is necessary. David says you must commit to either art or life. I say the best artists are involved in life. Dostoevsky faced a firing squad, Hemingway reported in Spain during the Spanish Civil War; Barbara Kingsolver lived in the Congo, Wole Soyinka was imprisoned as a dissident. So I wonder if David, as one more MFA professor tied to academia, is limited when it comes to unique experience. And what's left? Literary criticism.

In our book I talk about my friend Ceza. David interrupts and says, "If you can't transmute it into art, I'm not interested." Suffering and art aren't the same, of course, yet often there's a genuine correlation.

Schneiderman: You side with "art," but in a deliberately stylized manner within the supposedly authentic frame of the book. How much did you have to overstate or exaggerate your position to make it "work"?

Shields: That's crucial. I'm constantly curating my feelings. From the moment we started, I was hyperaware of cartoonizing myself in order to frame my position as combative/debatable. I'm trying to think of where I overstate my position, though. I was aware of curating and pushing my position, but I'm hard pressed right this moment to say/see where I actively exaggerated.

Schneiderman: You side with "life," but the continued theme is that you want to shape that life experience into art, into literature. Is this your way of doing so? Is this your meta-political book?

Powell: I'm an artist. And when I wasn't actively an artist, it still influenced my life decisions. As for a meta-political book? Sure, not that my ideas are that unique, but this is an opportunity for me to push them into the life/art matrix. The global capitalism vs. socialism dialectic, modern art, sports related to culture, the death penalty, the moral placebos of political correctness, some guy worshipping Che Guevara yet giving Che a pass even though Che was an unrepentant murderer who signed death warrants in Havana... and this same guy gets all outraged about Dick Cheney.

Judging others, yet failing to judge ourselves. My own failure in judging myself. And David's lurking, always holding a mirror, saying, "Hey, you need to be self-aware of your pretension."

Schneiderman: You push for a climax, a reversal, which arrives in a revelation about Caleb's alcoholism, but perhaps also never arrives except in a small meta-moments. Why does a "real" book require a climax? Is there one in Quarrel?

Shields: To me, the ending is/isn't that 'flip' at the end, in which I'm focused on my life (I want to get home to talk to my daughter Natalie on Skype) and Caleb is focused on curating the scene for its artistic value. Still, I was very aware of commenting on the trope of the flip structure in other such books and films, and I wanted the reader to see how much of a trope it is. Which we both deliver and somewhat parody.

Schneiderman: David pushes for a book-ending admission about your alcohol usage, and you push him, at the end of the manuscript, to admit that his relationship with his daughter takes precedence over his art. How did this end for you? Was this a literary experience after all?

Powell The ending in the film and book differ, but they both have this irony, this self-conscious push for a flip. David's intent is mutual flip and mine is not so much "not to flip" but to make something thought provoking. I come in with this philosophy that an artist must experience life. And now I am forced to question why I am not close to success. And yeah, definitely, I come out with a greater commitment to art...not sure that's a flip, though. And David's flip, well, is he really flipping? In the film and book, you wonder. If your humanity is reduced to an artistic gesture, how real is it?

As for alcohol, guilty as charged. I love how David says, at the Los Angeles Review of Books that I drank 125 beers on the trip. I saw the interview and protested, and he lowered it to 75 beers. I mean, I like my beer, but he's over counting. More on that in the book.

Davis Schneiderman and David Shields spend 6000 words arguing about collage in the December 2014 issue of The Writer's Chronicle. Schneiderman is Associate Dean of the Faculty and Director of the Center for Chicago Programs at Lake Forest College. His most recent work is the appropriation novel [SIC].