When abstract painting first came into being around a century ago, the traumatic struggle of overcoming 500 years of figuration set the prevailing defensive tone shared by its "inventors." Russian Cubo-Futurist painter Kazimir Malevich felt compelled to assert the superiority of his Suprematism, or "painterly realism," as he called it, over the earlier mimetic variety. Malevich's compatriot, Vasily Kandinsky, championed the artist's "inner need" as the basis for his intuitive improvisations, even going as far as indexing the degree of spirituality accorded to distinct shapes and colors. Dutch neoplasticist painter Piet Mondrian ceaselessly obsessed over the balance of verticals and horizontals in his grids, which were meant to point the way towards universal harmony. All three artists put their theories down in writing on multiple occasions, leaving a provocative legacy of poetic (Malevich), pedantic (Kandinsky) and dense (Mondrian) aesthetic theorizing of abstraction.

Unlike many of his historical predecessors in the field of abstract painting, aside from occasional interviews and very occasional public speaking engagements, Venice based artist Ed Moses (b. 1926), whose prolific and protean output spans over five decades, delegates the exegesis of his abstract paintings to scholars and critics. Meanwhile, Moses carries on "responding to the environment," through manipulation of painterly materials.

The University of California Irvine exhibition, titled "Ed Moses: Cross-Section" brings together Moses's paintings from 1970 onwards. It is an ambitious and meticulously curated mini-retrospective, and a homecoming of sorts for Moses, who was one of the original faculty members at the UC Irvine art department. As his first extensive show following the 1996 MOCA retrospective, "Cross-Section" catalogs the artist's multiple historical and critical contexts and genealogies. Using a series of take-away postcard-formatted 5"x7" critical texts, the curators Kevin Appel and Juli Carson invite the viewer to reexamine the thirty-two paintings in the three galleries against a background of critical, theoretical and art historical canons.

Art-historical contextualization is encouraged by Moses's copious and explicit references to Malevich and Mondrian. (Moses is not as keen on the color-driven Kandinsky, perhaps because it would be impossible to reconcile Moses's arbitrary, by his own admission, use of color, with Kandinsky's symbolic and hierarchical application of color.)

One of the earliest pieces in the show, Mal-A-Vich (1974-1975), is Moses's response to the 1973 Malevich's Guggenheim retrospective. This jocularly named mixed media painting features a floating red square on white ground, retracing the Russian artist's legendary squares, his "first step of pure creation." It channels both Malevich's 1915 Peasant Woman in Two Dimensions, and his 1918 masterpiece White on White (now at the Museum of Modern Art), but the gravitas of liberating painting from the shackles of nature is now replaced with a typographic play, arranging the forms in a dynamic dance of letters-cum-shapes.

The grid paintings from the mid-70s such as The Red One, NY Trac, Egyptian Trac and LA Track evoke Mondrian's hallmark gridwork--his fretful perpendiculars. Only in Moses's rendition diagonals replace the Dutch artist's verticals and horizontals. An ironic gesture, no doubt, given that at some point Mondrian severed his friendship with fellow neoplasticist Theo van Doesburg over the Doesburg's insistence on introducing the diagonals, which he deemed vital and important.

Art theory and criticism lend an interpretive hand too, situating Moses's work vis-à-vis Greenberg, Krauss, Bataille and Villiglé. Given the university venue of the show, this didactic approach seems perfect. Yet, the octogenarian artist's persistent refusal to be branded "an artist" decries the application of any interpretive framework beyond Moses's own description of his oeuvre as "investigation through process," or a "response to its environment."

The "crackling" paintings of the past few years are a case in point. The brittle and surfaces of The Marklet #2 (2012), Black and Yellow and Le Fleur (sic) (both 2013), and Slide-allure (2014) may indeed reference the cracking of the surface in the aging Maleviches and Mondrians, but above all they are Moses's references to himself. These could be understood as painterly abstractions of the material aging process, the artist's authentic response to his immediate environment. A response, which is, in my opinion, is as good a reason as any for putting paint on canvas. 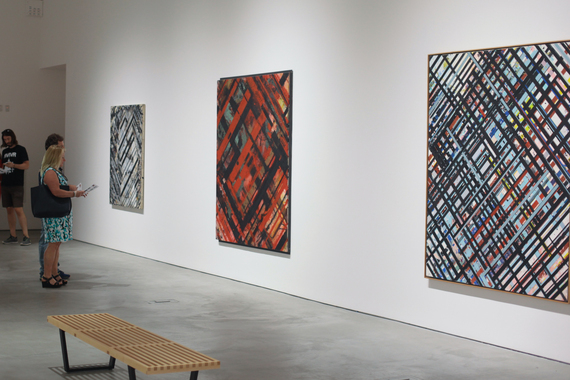 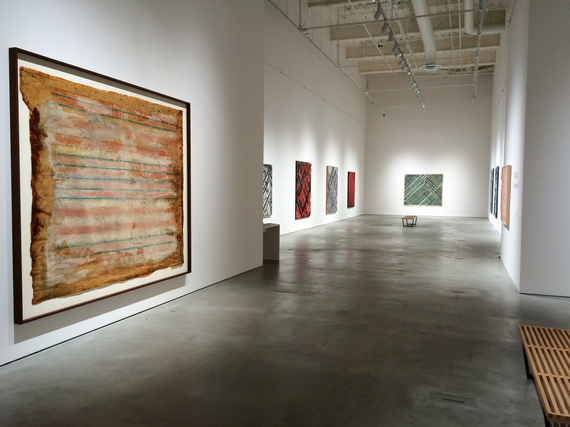 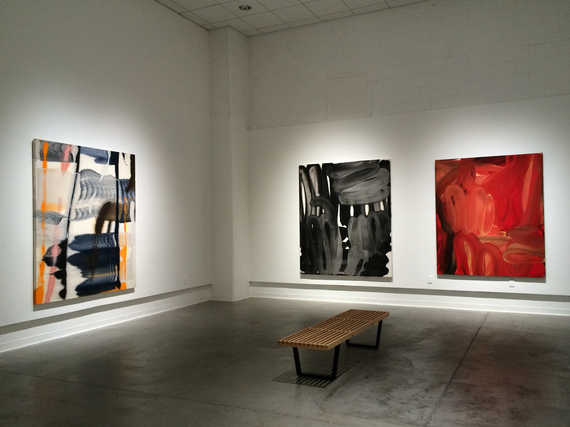 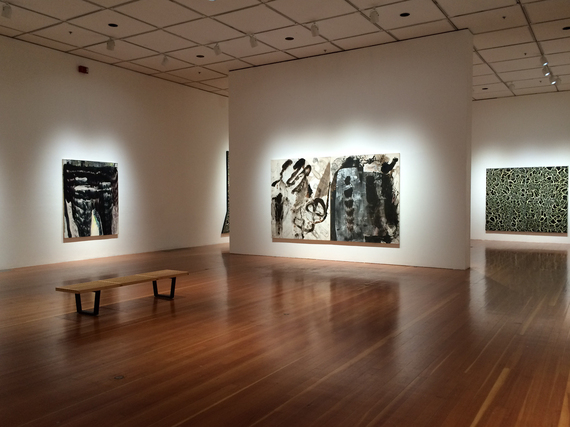 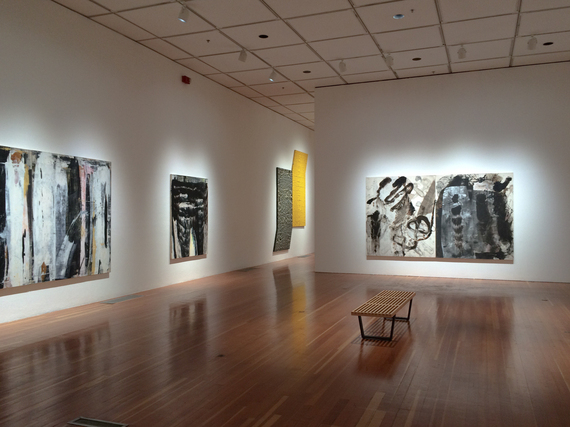