If you read the "about us" section of my blog, A Typical Son, you would know my husband and I adopted our son. There are a few posts on the blog about adopting, which is where I am cribbing some of this from. In general most people we meet do not know we adopted and I am just fine with that.

You want to know what people really think about kids with Down syndrome? Tell someone you're thinking of getting one. No one said anything close to "Hey, awesome!" It was more like "Why do you want to do that to yourself?" or "That sounds hard" or "Don't do that, please."

Our son was a ward of the state. He had been in a foster home for about a year before we met him. At 2-and-a-half years old, he could not walk and he could not talk. He weighed just over 20 pounds. He could sign the words "milk" and "more." His life had been upended a couple times. Our son, too, knew a little bit about not getting what you planned on in life. The fact he didn't curl up in a ball of defeat seemed to be evidence to us that this was an extraordinary person.

But we didn't know any of that then. We had a little of his backstory and a photo of him that we copied: one for the refrigerator and one I carried in my bag. I talked to him constantly in my head before I ever saw him in person. Mostly, I said things like, "Hold on." "Soon." "I love you." 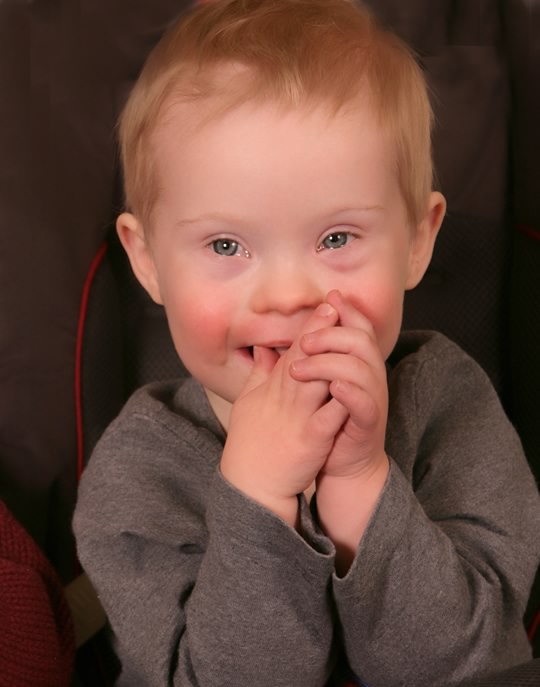 We first met our son in a drab, nondescript office building that housed the administrative offices of the family services organization his foster mother was employed by. We stood in the lobby surrounded by our adoption worker from the state, his guardian ad litem and a foster care supervisor. A very pleasant looking woman walked in carrying a very small boy whom we already considered our son. We didn't get to melt into that moment though. We were immediately ushered into a conference room. The meeting was mostly about why we would want to do that. It is difficult to explain to a group of hard-bitten types, "We just know he's the one," which was the truth.

State adoptions get tricky. You have to agree to take your child -- the one you already love -- in as a foster child that you hope to adopt. The tricky part is it might all go to shit. The biological parents who lost custody of their children due to abuse and neglect have a higher standing over you. Our son's foster mother told us, "You have to try to pull back in your feelings. Protect yourself in case you lose him."

I tried that for about three hours and came to realize I am an all-or-nothing kind of girl. We were in the deep end of the pool. Parenting in those months was about keeping our kid. Needless to say, we didn't get to "Down syndrome" until we knew this kid of ours wasn't going anywhere. Not losing him was our singular focus.

I don't say much about adoption for a few reasons. First, the conversation invariably becomes about about "Down syndrome" and not about "our son." Second, we are often thanked for adopting him, which frankly I hate. It assumes a couple things: "normal" children are better and somehow we have made some kind of sacrifice having "a less-than child." Plus, and, more importantly, it's insulting to our kid.

It isn't that I do not have empathy for people who grieve the child they did not plan on, but for my husband and I, our perspective on "the unplanned for" is different.

The previously mentioned guardian ad litem of our son's case told me, "Think of how hard it was for his parents to find out they were going to have someone like him?"

That is not an enlightened thought. The question is, I told her, "Imagine what his expectations were for coming into this world?"

Our son exists in the world in spite of how someone else feels about him. That goes for all people with Down syndrome.

Kari Wagner-Peck authors the blog A Typical Son. She is a writer and Down syndrome advocate/activist. You can find her at: www.atypicalson.com