Paralympians are elite athletes at the pinnacle of their sports.

Thanks to the passage of the Americans with Disabilities Act 26 years ago, today's American Paralympians are able to train as hard and compete like their Olympic counterparts, as access to sports and sports facilities is more of the norm rather than the exception. Similarly, thanks to increased accessibility requirements imposed by the International Olympic Committee for host cities and the impact of the Convention on the Rights of Persons with Disabilities, accessible sports facilities are increasingly available internationally as well. Yet, in many ways Paralympians are benefiting from a more "equal playing field" than we see in most workplaces around the world.

Unfortunately, not all persons with disabilities have achieved equal status with their non-disabled counterparts in the workplace. Even with greater access to buildings and facilities in the United States, many persons with disabilities still struggle to find equal employment. The Paralympics offer a success story demonstrating not only how the athletes have achieved equality through sports, but how they are often also leaders in their professional careers.

The Paralympics offer a success story demonstrating not only how the athletes have achieved equality through sports, but how they are often also leaders in their professional careers.

Paralympians have more to contribute than the sports in which they compete. When Team USA Paralympians retire from elite sports competition, many go on to successfully work in jobs in a variety of professions such as doctors, lawyers, teachers, financial advisors, and more. To highlight the success stories of these athletes, the State Department has launched a Social Media Awareness campaign #WithoutLimits.

Between now and Wednesday, September 7, which marks the opening day of the 2016 Paralympic Games in Rio, we will share the profiles of up to 40 international and American Paralympians and Parasport athletes in their workplace. Each athlete will be featured holding a photo of themselves in their Paralympic sport to demonstrate the ways in which they "work #WithoutLimits." 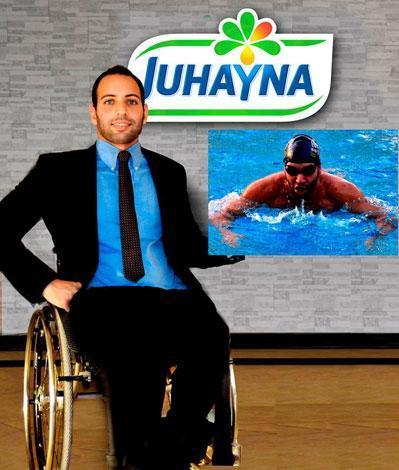 Elsam Mohamed is pictured smiling in front of a Juhayna sign. He is holding a photo of himself swimming.

After Mr. Eslam Mohamed of Egypt was paralyzed by a car accident in January 2012, he decided he wanted to learn how to swim and compete on a professional level. Within nine months of his accident, Eslam started representing Egypt in local and international competitions. He also helped establish the Egyptian national team in collaboration with the Ministry of Youth and Sports. He eventually achieved a couple of bronze medals in the open championship of Alcorcon in Madrid in March 2015. When he is not competing in sports, Eslam works as a human resource business partner in one of the biggest companies in food and beverages in Egypt, JUHAYNA. He also volunteers his time as a disability advocate and Vice-President at Alhassan Foundation for Differently Abled Inclusion, whose work is focused on wheelchair users in Egypt. 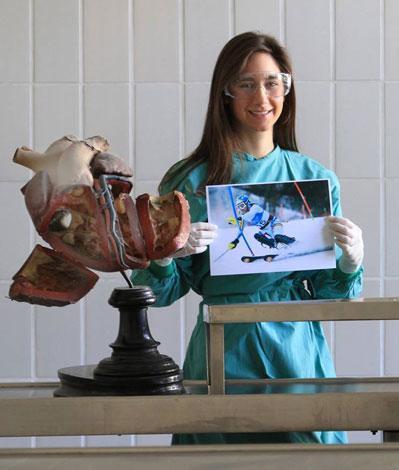 Laura Valeanu is pictured smiling in a medical lab next to a model of a human heart. She is holding a photo of herself skiing.
Advertisement

Ms. Laura Veleanu is a 26-year-old Paralympic Alpine Skier from Romania, and is also a physician at the Institute of Pathology at the Ludwig-Maximilians-Universität München. She started competing at a very early age, even after a motorcycle accident in 2006 that caused her right leg to be amputated below the knee. She debuted in the 2010 Paralympics in Vancouver, Canada, which marked the first time in history Romania was represented at the Paralympic Winter Games. Her best results include fifth place in slalom at the Paralympic Winter Games in 2014 in Sochi, Russia; a bronze medal in slalom at the Paralympic World Championship in 2015 in Panorama, Canada; and, silver medal in giant slalom at the World Cup Finals in 2016 in Aspen, Colorado. She is currently preparing for the Paralympic Winter Games which will take place in Pyeongchang, South Korea in 2018. Referred to as "the woman with the open heart" by her supervisor, she believes that people with disabilities should have the same opportunities in the workplace as non-disabled people. 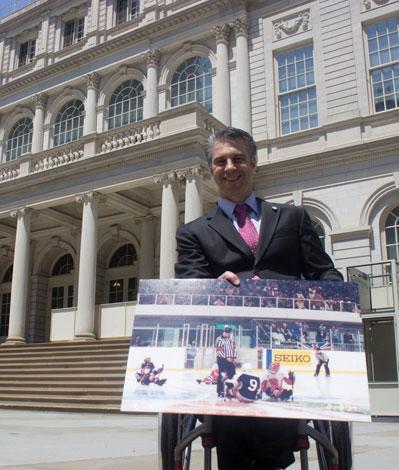 Victor Calise, a wheelchair user, is pictured smiling in front New York City Hall. Victor is holding a large photo of himself playing Sled Hockey at the 1998 Paralympic Games in Nagano, Japan.

Mr. Victor Calise competed on the first U.S. Paralympic sled hockey team in 1998 in Nagano, Japan. He now works directly for the Mayor of New York City as the Commissioner of the Mayor's Office for Persons with Disabilities, where is he focusing on making New York the most accessible city in the world through transportation options, employing people with disabilities, and providing greater access to city services and education. On and off the ice, Victor works #WithoutLimits. 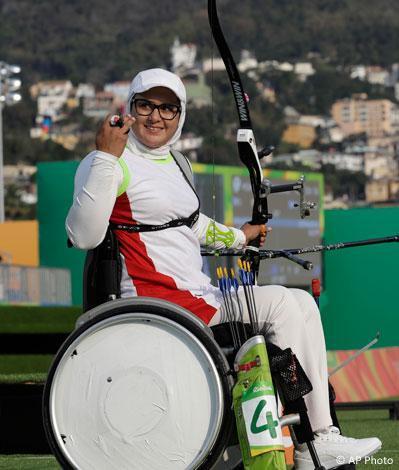 Zahra Nemati smiles during an elimination round of the individual archery competition at the Sambadrome venue during the 2016 Summer Olympics in Rio de Janeiro, Brazil, August 9, 2016.

Ms. Zahra Nemati of Iran secured qualification slots for archery in both 2016 Paralympics and Olympics. She was selected to carry Iran's flag into the Opening Ceremony of the 2016 Olympic Games in Rio, an honor bestowed on her by fellow teammates. In London in 2012, Zahra set a Paralympic record on her way to gold in the women's individual recurve W1/W2, and she picked up a bronze medal in the women's team recurve open. In Iran she is one of the most popular athletes in any sport. Her success resulted in significant media coverage back home, and inspired other women to take up Parasport, particularly archery. In June, 2014, she addressed a United Nations panel called "Sports for inclusive development: Empowering persons with disabilities through sport." On and off the archery range, Zahra works to increase opportunities for women #WithoutLimits.

All of these individuals -- and many more Paralympians who are being profiled in this campaign -- have achieved similar greatness and success in their sport. Many also work on behalf of the disability community, either in mentoring the next generation of Paralympian athletes, or advocating for and improving the lives of persons with disabilities who want to achieve similar success #Withoutlimits. We are grateful for what these competitors achieve on and off the field, especially leveraging their status as Paralympians and their professional advancement to serve as a beacon of hope to so many people with disabilities around the world.

For more information:
- Follow along with the #WithoutLimits campaign by following Special Advisor Judith Heumann on Facebook and @IntDisablity on Twitter.
- Learn more about the U.S. Department of State's efforts to advance disability rights around the world.
- Read more DipNote blogs by Special Advisor Heumann.