I didn't know him, unfortunately. According to tearful family members, he was funny, wise, loving, caring. They were proud that he'd earned a license to drive 18-wheelers. He was 39, father of two, stepfather of four others. He helped those in need of assistance in the neighborhood, doing things like running errands, picking up groceries for the elderly. He liked fixing things.

But he was Black and in the wrong place at the wrong time. Meaning he was too close to Oakland, California, police officers who were over-armed, over-scared, wrongly trained, and inevitably biased (like the rest of us), carrying out an operation in a neighborhood where they were uptight. Three officers new to the force, along with a sergeant, fired 16 bullets into him. 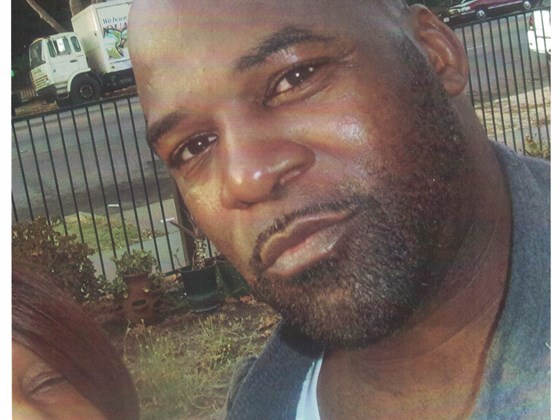 Photo: posted by the family on youcaring.com page seeking help with funeral costs.

The few witnesses not afraid to talk told Anti Police-Terror Project investigators that, yes, he did have a harmless pellet gun. And, no, it was not suicide-by-cop, i.e., the police narrative of his approaching them and pointing it at them was false. (I'll grant that maybe they thought otherwise before they saw the video that they won't release to the public.) He was trying to reassure them that the apparent weapon he visibly possessed was not real.

I've written about the injustice of police killings and other brutalizations of people of color before, but that's not why I'm writing now. I wish I were a good enough writer, and had a complete enough memory of the anguished words I heard, to give you, the reader, a taste of the sorrow I felt sitting in that Baptist Church this morning and still feel as I write this hours later. As I told the bereaved mother in a note asking permission to use Mr. Perkins's photo, my tears started flowing when I read her poem. She had heard about the shooting before she knew who the victim was.

I am sorry you was all alone
I was out there praying for that family
But I didn't know it was for me.

The next day, I felt it was you.
I looked out my window to see — would I see you?
Would I see you passing by?
Son, I will never see you again,
But I feel you.

It's not enough for those of us who identify as white to be against injustice, nor even to take action against it. My own activism goes way back, but I've caught onto something else these days, especially when the rapid changes since the Civil Rights Movement can lull white folks into feeling emotionally that racial oppression is mostly a problem of the past, knowing only in our heads, from what we read, that it is not.

A Call to a Different Kind of Action, One That Changes You

Perhaps the best thing white people can do to help heal the racial divide is to show up at places where we can let the pain of our sisters and brothers of color enter our hearts.

Something different happens when you hear family members and friends talk about their loved one, speaking simply, spontaneously, concretely of what made him or her unique. It's different when you and the congregant sitting next to you both reach out as the usher comes by with the Kleenex box. It's different when you later tentatively touch that same stranger's shoulder as she sits down again, sobbing after speaking to the gathering, and she responds by turning to you for a hug.

For me it takes some courage to show up where my initial reaction is to feel out of place. You might ease your way in by going to a protest rally or street vigil where some friends and family of the victim speak. And to know where to go, you need to be tuned in. When you hear of a police shooting, or beating of a student, or whatever, put on your thinking cap and figure out who will be on top of it (NAACP, Urban League, Black clergy, your activist friend?). Better yet, if you live in an urban area, find out now who is doing Black Lives Matter or similar work so that the next time — and, sadly, there will be a next time all too soon — you know where to turn.

I don't know what it means to the family and congregation when a handful of people of other races show up. I do know I was greeted with great courtesy, and I can't help believing that it meant something to see that some of us cared enough to show up.

What I know for sure is the impact on me. I can easily go into self-righteousness about injustice, but it's another thing entirely to feel — more than I feel my differences from the others in the room — my common humanity with those whom my society oppresses, and to take in and share some of the raw pain that they experience. Something in me actually needs this, and I suspect something in you, dear reader, needs it as well.

Certainly our sundered society does.