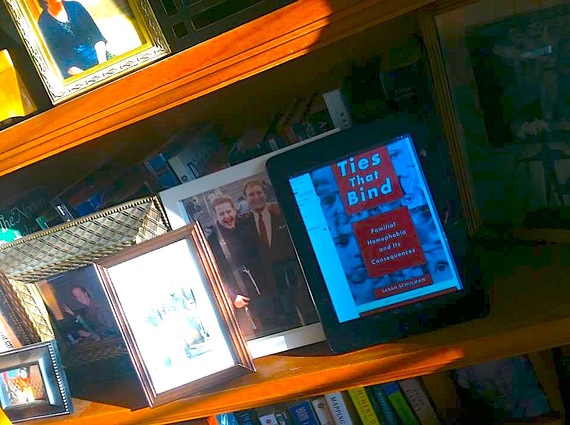 My father, who died five years ago this February just before his 70th birthday, was a good man. He honorably served his country in the United States Air Force's Strategic Air Command during the frightening height of the Cold War. After a successful career in the corporate world, he taught hundreds of people how to be more effective in their working lives. He raised and provided amply for a family, and toward the end of his life, in partnership with his devoted second wife, he became very involved in issues of reforestation and environmentalism. A useful life, an admirable man.

Perhaps because his first marriage fell apart around the time of the birth of his youngest child, or perhaps because it was evident from very early on that that son was sensitive, a mama's boy, and not destined to be the champion jock that he was, or perhaps because this son harmonized with the vacuum cleaner, singing songs from The Rocky Horror Picture Show at the top his lungs, or because of any one of a dozen or more differences in character or temperament, father and son never were quite comfortable with each other.

I was terrified of him most of the time, of his (in many ways understandable) impatience with me, his high standards, and his conservatism in quotidian aspects of his life as well as in his political and social values. I think in retrospect that we both probably tried very hard with each other to understand, to accept, to tolerate, to soften the harder edges of our differences.

But as I grew toward adulthood, it seemed that those differences became more difficult to reconcile, manage or ignore. When I finished college and moved to New York, in that first year, with some hard feelings on both sides, I asked for a break in communication, as I needed to assert my independence from him both financially and emotionally, and because I was fatigued and frustrated with my fear of him, and frankly because I considered him a bully and I was sick of it.

Eighteen years without a word between us passed quicker than I could have imagined.

My father never said a bad word about homosexuality or gay people. He loved the flamboyant Australian singer and songwriter Peter Allen and even went to one of his concerts in Manhattan. That must have been eye-opening. He believed strongly in equality and fairness, that every person, by dint of their own discipline and passion, could achieve great things, and acknowledged excellence fulsomely, without exception for color, creed or kind.

But he must have been disappointed as well as angered by what he most probably considered sharper than a serpent's tooth: my rejection of him, the person he was and the way he lived his life with those he was most intimate.

The theatrical writer and director Moss Hart, in his classic and wise autobiography Act One, wrote:

At a certain age, sometimes early, sometimes late, children make up their minds about their parents. They decide, not always justly, the kind of people their mothers and fathers are, and the judgment can be a stern one.

As a psychotherapist, I believe that such judgments have complex antecedents, not rarely intergenerational, but certainly, in my opinion, fired and hardened in the crucible of the marriage from which the offspring emerge blinking and ever watchful. Its inevitability is only matched by its pathos.

And those judgments in turn beget other judgments.

I would reach out to my father periodically, with a short letter or gift, but saw him just thrice, at my sister's and brother's weddings and the christening of my brother's first child, and although I spoke to him on the phone during his brutal final illness from multiple cancers, I wasn't sure I would be welcome at his funeral with the Air Force Honor Guard playing taps and folding the American flag in those precise triangles. I was allowed and did attend, standing in the receiving line with his widow and my siblings and their spouses, and nodded and murmured the sincere platitudes of such occasions.

Several months later, I was not surprised (but deeply stunned) to open a large manila envelope from the mailbox that contained his will and read the codicil that said, "When speaking of my children, I am not including Christopher Thorell Murray." The large share of his estate went to his widow, with, in addition to some very minor apportions, a chunk to my sister and a double chunk to my brother, the child with whom he was closest.

I had, by this time, founded my career and was doing well enough that the money didn't bother me at the time except as a symbol of that terrible sentence of disavowal. I never really expected that he would, Scrooge-like, undergo some deathbed transformation leading to a teary reconciliation. That wasn't who he was, nor I. But the starkness of the terms by which he left this life were Lear-like in relation to those he left behind, particularly for my brother and sister and me, and akin to a depth charge of family drama that, after the battleships have all gone rusty in drydock, one day explodes from the ocean floor, sending geysers of salt water and shrapnel whizzing up above the waves and into the air.

I attempted, throughout all those seasons of my childhood and our long estrangement, to keep my heart soft and my upper lip stiff. In the legalistic aftermath of his death, I tried to take the practical position, which I believe, that he had a right to do with his estate as he wished. I certainly wanted to minimize the potential for discord between my family and me. But like the gradual and slow then suddenly sharp attenuation of my relationship with him, as well as the sleeping-old-dog-by-the-andirons-that-bites-upon-waking experience of the disinheritance, I've been unable to slow the downhill tumble and speed of resentment, hurt and conflict that has subsumed my experience of grieving and threatens to separate me from my family.

With all the complexities of families, of me, of good decisions and poor ones, of other crises and conflicts, how much does the story of my father and me and its missing jigsaw pieces have to do with my being a gay man? I've come to believe quite a lot, actually.

The lesbian writer and invaluable public intellectual Sarah Schulman wrote a deceptively diminutive book a few years back called Ties That Bind: Familial Homophobia and Its Consequences. Alternatively written with shrewd and laser-like perception and searing personal disclosure, Ties That Bind not only coined the necessary phrase "familial homophobia" but brilliantly and compassionately illustrates the scapegoating and ally-alienating experience of children who are gender-different and who often grow into gay or transgender adults. An imperfect but apt comparison may be to girls and young women and, increasingly, boys and young men whose emotionally and physically dangerous behaviors of anorexia or bulimia are now understood by mental health professionals to almost invariably be the hallmark and concrete manifestation of conflicts and communication problems within families that play out symbolically upon and within the physical body.

These days any counselor worth her or his salt who sees a frightened and frustrated parent dragging a daughter who binges and purges into their office demanding that they be fixed now, immediately, knows to insist on family therapy. The purpose is to shelter the girl from being blamed and overly pathologized, and to address the relational causes of such terrifying disorders and attend to the specific pain and self-destructive behaviors of the young person.

I frequently recommend Schulman's book to mental health practitioners, but also to clients and friends who are concerned about the painful experiences of families and children of any age who don't understand the mechanisms of emotion and trauma that form the recognizable patterns of familial homophobia. Like structural racism in our society, in response to which we must contend with institutions that are prejudicial even while well-meaning and sensitive people who operate in relation to and within those institutions may often not themselves be consciously or intentionally racist, families have an opportunity to protect and embrace all their children, gay and straight, male and female, and work together to heal deeply-felt wounds.

Would my dad and I have fared better if I weren't gay? Who can say or measure the impact of such an essential element of one's self? I do know that we gay kids seem to wear our awareness of our own differences and our fear that we will be rejected for them on our faces, and that we see our parents seeing that awareness. Most gay kids still, even with how much more "normal" homosexuality is considered in our culture these days, grow up, in some very essential way, alone.

I am vexed by that oft-recited parental apologia "Well, we thought we would wait until you came to us," which means that kids must decide for themselves if they think their family will respond well and lovingly if they speak about the bully, the crush, the fear of disease, the online intrigue, the first assignation, the first love, the first drugs, the funny discolored spot on their privates, the self-doubt and confusion about who they falteringly sense themselves becoming, always having been. For gender-different kids, with some rare exceptions, our culture has a very long way to go in asserting much tolerance and love, let alone civil rights and protections. I understand homophobia and transphobia as subsets and extensions of sexism. It's not so much that gay kids will grow up to have gay sex that rankles, but that they perform gender differently than our culture still expects and demands, and the sanctions for that are often fierce and fearsome.

After my father's death, I hesitatingly asked a family member, twice, before I was given the only momento mori I have of him: a digital copy of a picture from the early 1940s of him and his brother as kids: smiling, innocent, fresh and full of optimism, their whole lives and selves yet to be discovered and created. I have a print of it in a frame on my bookshelf with a bunch of other photographs of family and friends who have become family. It helps me to see him as that sweet kid with his big brother.

Familial homophobia certainly doesn't create all the problems in families that have gay or gender-different members, just as much as sexism isn't responsible for every teen pregnancy, but it sure helps such thing along. By the same measure, knowledge of such dynamics is sadly not a magic wand that one can wave with broad strokes to alleviate all the suffering, sadness and separation that gay people and their families have endured and continue to experience. It hasn't been enough to this point in my family, but it has been a Balm of Gilead to me to have some comprehension of and validation for something that has cast such a lengthy shadow over my family and my life.

I hope one day to be able to hold the tenderer memories of my father and the man he was without the darker, sharper edges seeming to be the complete picture.

Christopher Murray, LCSW-R, is a psychotherapist in private practice in Manhattan and can be reach at www.christophermurray.org.