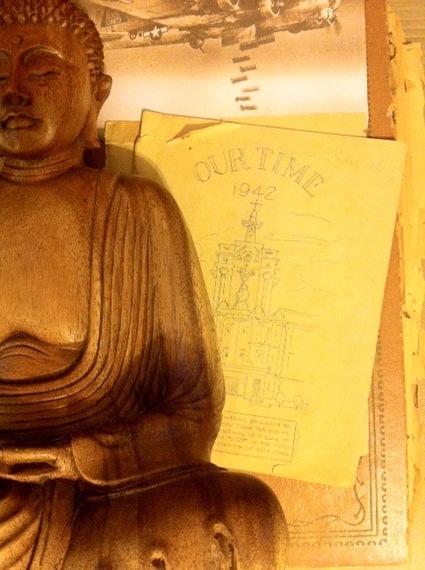 My mother leaned her head back against the car seat and looked up at the cloud-spotted night sky. She sighed contentedly and then spoke the words that have since become legendary in our family, "What a beautiful night for bombing!" For the rest of us riding in the car that night, it was 1993 and we were driving home after a pleasant meal at a restaurant. For my mother, a child of war, time could warp in an instant. It's 1945 and those clouds in a moonless sky are perfect cover for the U.S. bombers to fly in without being shot down by enemy fire.

I've spent another afternoon re-reading my mother's diary from when she was a teenager, the one she kept hidden through years of internment in a Japanese prisoner of war camp in the Philippines during WWII. She wrote of the bombing of Manila at the start of the war and again by U.S. liberation forces at the end of the war. She wrote of the confusion and turmoil, the stench of a burning city, sleepless nights while the air raid sirens wailed, holding a pencil between her teeth as the bombs dropped so she wouldn't bite her tongue. She wrote of scurrying into damp shelters crammed with the scent of fear, of not enough food or water, of explosions everywhere, of blood and shrapnel, the eerie whistling of the bombs as they dropped from the sky. She wrote of close calls and direct hits -- the horror of seeing a friend's face blown off, someone's guts splattered on the floor next to her, a friend's father reduced to an unrecognizable mess.

Starting from the day when she first shared the diary in a brilliant and successful attempt to connect with her rebellious teenager who thought her mother stupid and outdated, that diary has taught me many things -- more than my mother ever said in words.

Here's one thing I learned: It doesn't matter who sends the bombs, shoots the gun or wields the machete, because the effects of war on children are the same. According to UNICEF, a total of 5.5 million children have been affected by the current conflict in Syria. Another UNICEF report states that in the decade prior to 1996, wars left 10 million children psychologically traumatized, two million dead, 4-5 million disabled and 12 million homeless. Sixty-one countries are experiencing armed conflict as I write this sentence and those schoolgirls are still missing in Nigeria. For the amazing organizations and individuals who work directly to protect and heal children of war, these aren't just statistics on a page or circles on a map. I bow in deep respect to their courage, compassion and commitment.

I don't know what to do with numbers like that, so I go back to reading my mother's diary as an awareness practice that helps move me deeper into my heart than any statistic or television spot ever could. I come face-to-face with a deep, aching well of sorrow that breaks my heart open. I've been here before, I know this territory and how to move through it.

The ambush comes when an upsurge of judgment-fueled rage against "men and their F-ing wars" blasts through my body like a white-hot bomb. Yowza! How easily my own violent thoughts surface in reaction to violence around me! The anger reminds me that I feel passionately about creating a world safe for children; it's those thoughts of vengeance and retaliation that feel dangerous. As a therapist I've worked with both abusers and victims, so I know that many perpetrators of violence were once on the receiving end. That doesn't stop my initial visceral reaction that can strike without warning.

So here's something else I learned from reading my mother's diary: Once again, I have to turn toward this war-like part of myself with curiosity and compassion so that I can train her, and train her well. I thought I had done most of that work, but just as the world seems to be offering up endless opportunities to respond to violence, the opportunities for training and fine tuning my warrior self are also on-going. This, I know: If left untended, not only will she destroy any chance of inner peace I could ever hope for, I'll never be able to help create a world where no child is caught in the devastation of war.