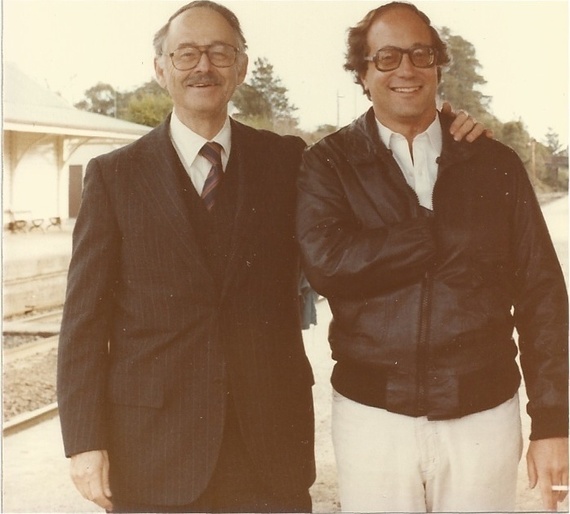 Nineteen months ago my dear friend and close collaborator Bernie Brandchaft died, 14 months after the death of his dear wife Elaine. A year ago Bernie's daughter Wendy was kind enough to give me a photograph of Bernie and me that seemed decades old, and soon thereafter she gave me one of Elaine and me that appeared to be from the same era. Slowly I was able to piece together the context in which these photos were taken. They were taken by my late wife Dede (who died in February 1991), while the four of us were traveling together in Australia, where Bernie and I were lecturing. Upon figuring this out, I had a thought that plunged me into deep sadness: "Of the four of us, only I remain. I am a remainder."

"[T]he world [is] suspended by some unique tear ... reflecting disappearance itself: the world, the whole world, the world itself, for death takes from us not only some particular life within the world, some moment that belongs to us, but, each time, without limit, someone through whom the world, and first of all our own world, will have opened up..." (Derrida, 2001, p. 107).

The emotional world that had been co-constituted by Dede, Bernie, Elaine, and me is gone. Only I remain. I am a remainder.

There are other meanings condensed in the word remainder. In mathematics, a remainder is what is left over after a division has been performed. A remainder in the sense that I am using the word here is a leftover from an emotional world that has been shattered.

In philosophy, the word remainder is sometimes used to characterize a phenomenon that falls outside of a particular framework of intelligibility; it is ungraspable, a surplus. Traumatic loss of a loved one -- any trauma, for that matter -- is a remainder in this philosophical sense, because it is unfathomable within the tranquilizing framework of normal everyday intelligibility. I experienced just this at a conference in 1992 at which I relived the horror of waking up 20 months earlier and finding Dede lying dead across our bed:

"[A]s I looked around the ballroom, [my friends and colleagues] all seemed like strange and alien beings to me. Or more accurately, I seemed like a strange and alien being -- not of this world ... An unbridgeable gulf seemed to open up, separating me forever from my friends and colleagues. They could never even begin to fathom my experience, I thought to myself, because we now lived in altogether different worlds." (Stolorow, 2007. pp. 13-14)

I am a remainder. Being the remainder of an emotional world shattered by trauma is a source of the uncanny sense of estrangement and isolation from the world of everydayness that is experienced by traumatized persons.

More:
Death & Dyinghealthy livingtraumaDeathbereavement
Newsletter Sign Up
The essential guide to taking care of your mind and body
Subscribe to HuffPost’s wellness email
Successfully Subscribed!
Wellness delivered to your inbox

I am a psychoanalyst, philosopher, and author.