What makes something a classic? It's a question worth asking as Hollywood devotes ever more of its resources to remaking movies, TV shows, and comic books from the past as the majority of our movie content today. Not that we mind the odd sequel (we're definitely looking forward to Spectre and Star Wars) - but 2015 will see an unprecedented number of sequels and remakes, including new installments in the Mad Max, Mission Impossible, Jurassic Park, Terminator, Avengers, and Fast and Furious franchises.

If you want a break and would like to see some movies that are truly unrepeatable and non-franchisable, we suggest you check out the upcoming 2015 TCM Classic Film Festival, returning to historic Hollywood from March 26th to March 29th, 2015. It's a marvelous chance to see some of the world's classic movies the way they were meant to be seen: on the big screen, and often with their original creators in attendance.

The classic movies shown at the TCM Classic Film Festival are inspiring because they are the result of what can be called "first-order," direct personal experience. They are not self-referential mash-ups of other people's work, but are original art works created by some of the cinema's greatest talents during Hollywood's Golden Age. The festival is one of the last opportunities our generation will have to encounter first-hand some of Hollywood's classic film artists - and it's an opportunity to be very thankful for. 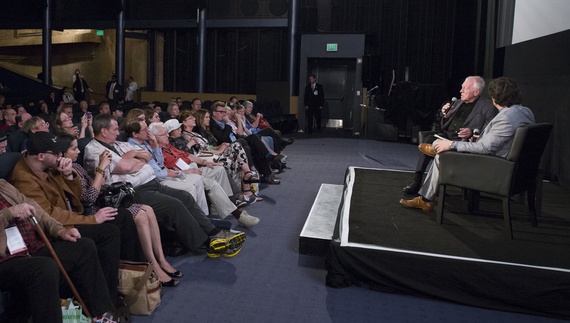 At the 2014 TCM Classic Film Festival, for example, we had the chance to attend the red carpet at the Chinese Theatre and chat with such Golden Age movie stars as Maureen O'Hara, Kim Novak, Tippi Hedren, Shirley Jones, Margaret O'Brien, and George Chakiris. Each of them was charming, gracious, and ready with a witty quip - though none had more quips than legendary funnyman Mel Brooks - who we saw being interviewed by Robert Osborne in the lobby of the Roosevelt Hotel.

Also inspiring were the screenings we attended in some of Hollywood's glamorous movie palaces, edifices with evocative names like El Capitan, The Egyptian, and The Chinese. We saw in their hallowed halls singular movies like How Green Was My Valley, The Adventures of Robin Hood (with a wonderful presentation by Ben Burtt and Craig Barron on its special effects), and The Sorcerer (with director William Friedkin discussing afterward the film's extraordinary action sequences).

Equally memorable was an evening, pool-side screening at the Roosevelt Hotel of American Graffiti, with Ben Mankiewicz conducting a witty interview with cast members Candy Clark, Paul LeMat, and Bo Hopkins. It's not often you can watch a classic movie lounging with a drink in hand under a palm tree in the heart of Hollywood - but perhaps it's how all movies should be seen. 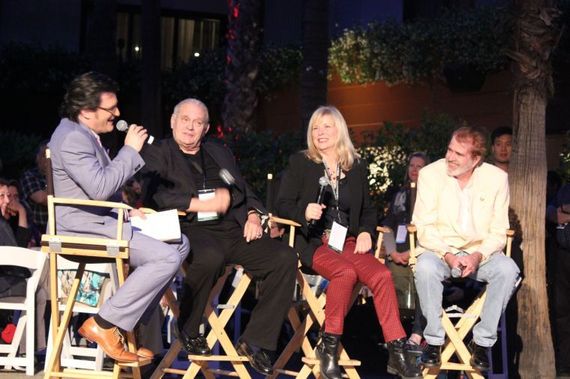 As for the year before, at the 2013 festival, we attended screenings of On the Waterfront, The Seventh Seal, It's a Mad, Mad, Mad, Mad World, and Mildred Pierce. We saw in person such stars as Eva Marie-Saint, Max Von Sydow, Mickey Rooney, Ann Blyth, and Norman Lloyd - and each of them was an absolute delight.

Seeing these classic stars and movies in person has a unique impact: it gives a tangible immediacy to movie-making. It makes the awe-inspiring and perhaps intimidating quality of classic Hollywood movies seem more real and attainable - if only just barely.

That's why as filmmakers we love going to the TCM Classic Film Festival: it gives us the chance to have contact with the people who made Golden Age Hollywood what it was. These artists helped found the medium of film and created film grammar in an era of astonishing productivity from the 1910s to the '60s/'70s that is still the touchstone of quality for every generation of filmmakers since. It's always a poignant experience to go to the festival, because we know these stars are aging and seeing them is a reminder of the too rapid passage of time - but it's still an experience not to be missed.

So what special delights are in store for TCM festival-goers this year? Highlights of the 2015 TCM Classic Film Festival include an opening night 50th anniversary gala screening of The Sound of Music, with stars Julie Andrews and Christopher Plummer in attendance, a TCM special with Robert Osborne interviewing screen legend Sophia Loren - who will also present her film Marriage Italian Style - and star Ann-Margret presenting a 50th anniversary screening of The Cincinnati Kid. There will be dozens of additional special screenings and events that you can learn about by visiting the TCM website. 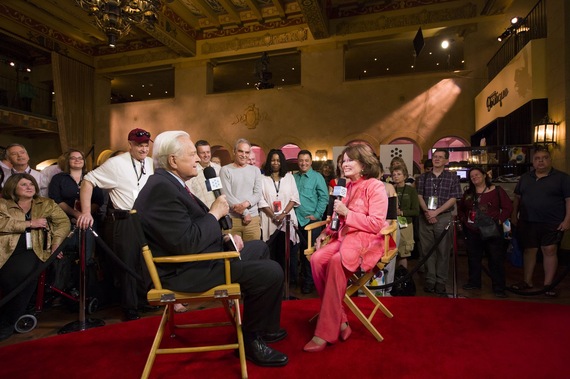 When we asked Robert Osborne why the films of Golden Age Hollywood were so good, Osborne responded:

"I think the personalities were so different then. We wanted bigger than life personalities. We went to the movies to see dynamic people like Bogart and Barbara Stanwyck and people like that. Today we want everyone to be just like a real person. You want Robert Redford or Robert DeNiro to be just like the cab driver in New York ... so that's what we want, we want reality now..."

"I think the world has changed, morality is different. We don't have heroes anymore. We love people smashing other people up. People don't talk to one another anymore, they're on their cell phones ... people today, they don't sit down at their dinner table with their kids ... so much of that used to be part of the ritual of people's lives, and I think that all that added a depth and a substance to people's lives. They also had great respect for writers, so we knew who James M. Cain was, and we bought his book ... Today you rarely see an author's name's mentioned in a movie title or anything anymore."

Ben Mankiewicz expanded on this importance of reading and writing. When we asked him how his grandfather Herman Mankiewicz (Citizen Kane) and great-uncle Joseph Mankiewicz (All About Eve) had found the inspiration to write and direct so many classic films, Mankiewiecz responded:

"They read. ...The way you get to be a great writer is you read great writers. ... Back then, writing had to carry the movie. There was a value placed on wit, there was a value ... to fully embracing classic literature, and they [Herman and Joseph] read everything. When you go back and do research, when you read the newspapers from back then, you read the sports stories from the '40s and '50s, they're so good, they're written so well. That's what Billy Wilder was reading every morning, that's what my grandfather was reading every morning. There was a much bigger focus on writing."

We half-jokingly suggested to Charles Tabesh and Genevieve McGillicuddy that the Hollywood studios ought to pay TCM royalties for all the ideas they get from the classic movies shown on the network. Genevieve McGillicuddy responded that they do in fact get a lot of support from the film industry, and offered as an example that Anna Kendrick was a big fan of The Women and would be at the festival to introduce it.

"I think that it is something that we're really trying to incorporate as an extension of what we do at the network with our guest programmers ... we hear that from the industry quite a lot [that they're fans of the network] and we're grateful and appreciative of the attention."

"And to your point too, contemporary directors that we hear from all the time - David O. Russell, Alexander Payne and Francis Coppola have all reached out to us and said 'We love TCM, we're big fans' - Steven Spielberg, Martin Scorsese, as well ... and it's gratifying for us because it means they're paying attention, and that's terrific." 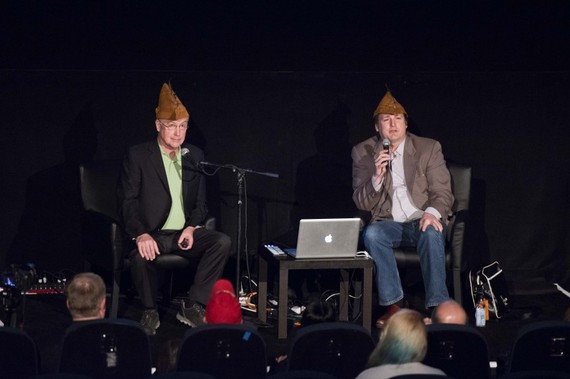 Tabesh recounted that TCM also makes an effort to engage the contemporary film industry as much as possible, inviting notable directors and film figures to appear as guest programmers on the network or host screenings at the festival. Tabesh explained:

So why does all this matter for today's movie lovers, who may only be interested in contemporary movies? It matters because our movies are our leading story-telling medium - the predominant art form by which we express our collective dreams. The question is, how do we create fresh original works that will be tomorrow's classics?

Creating classics today seems to be getting increasingly difficult. The Internet and the libraries of content that are now available to everyone are having a dual effect: on the one hand, we have the wonderful opportunity to have more content available than every before - to rediscover gems from the past - movies, TV shows, songs, artworks - that we otherwise might not be able to enjoy. On the other hand, as a result of all this readily-available content, we're not always experiencing life directly, but are experiencing it through media. We're entering an era that tech pioneer Jaron Lanier calls "Retropolis," dominated by "second-order culture." Lanier writes in his prescient book You Are Not a Gadget:

This is a very interesting point to make. For example, Lanier notes that since the dissemination of the Internet in the '90s we no longer have decades marked by one particular look, musical sound, or style. Movies, music, fashion, and other cultural efforts in the digital era are often a pastiche of styles from the '60s, '70s, '80s, and other decades.

Yes, there is still originality today: the distinctive look of digital special effects in movies, digital prints in fashion, and the new possibilities of digital image manipulation in photography are all notable examples. However, if anyone looks at the most recent fashion collections and sees how they borrow wholesale the look of the '70s (bell bottoms, earth tones, suede, fringe), or looks at this year's blockbuster movies and sees that most of their source material is from the '50s, '60s, '70s, and '80s, then one begins to get the larger point. When do we get to create something new - something that expresses who we are at this particular moment?

So this is the irony of loving classic movies and going to the TCM Classic Film Festival. We go to the festival not to copy the movies of the past, but to be inspired by their quality and originality, and to bask in the joyful life-spirit and first-order experience of the artists who created them. Then we return to our own lives and work to create something new.