There are several aspects of owning a professional sports team that I love: planning for the future; building the next championship-caliber team; working with a committed, deeply competent, and wildly passionate back office staff to strengthen our business; getting to know the players and supporting them in their lives; sharing the ups and downs of ownership with my partners. Trading players is not one of them. And in this world of the 24/7 news cycle, social media and near-instantaneous news, figuring out how to reach players who are busy plying their trade literally half a world away, to tell them directly that they will no longer be Storm players, brings additional challenges.

How do you break up with someone in public? We can keep things emotionally sanitary by declaring that we are making a business decision for our franchise. That's true. Times change. Teams change. Players change. Needs change. Rosters need to adjust accordingly.

We can maintain our distance, too, keep it all "professional." We could say something along the lines of "Buck up, chin up. That's part of the landscape of being a professional athlete in a team sport. You still have a job. That's life, right?"

But that's not how we roll at the Seattle Storm. Of course we are going to make decisions that are in the best long-term interest of our franchise. We are not going to dither over the possibility of hurting feelings. But, we are not going to ignore the fact that every player who spends time on our roster deserves to be treated with respect and compassion during times of change. If we can lessen the emotional impact that inevitably accompanies a trade that a player did not want, then we will. I don't know if there's a way to remove the sting, but at least we can attempt to reduce it: acknowledge our shared history, the pain of parting, and say 'thank you.'

It is tempting to say nothing in instances like this, to avoid any contact. Doing that allows us to deny the reality that we've caused another pain. But denial can also increase the pain. 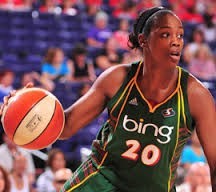 So, to Camille Little, whose tenure as a Storm player is a mere handful of months shorter than mine as an owner, allow me to say this: I remember our first meeting, in that bar in a Los Angeles hotel. You'd just arrived off your flight from Atlanta to join our roster. We were ordering drinks, you were waiting for your meal, and your first words of introduction made me laugh. I liked you instantly. You played an instrumental role in our run to the WNBA Championship in 2010, played with heart and grit consistently and developed an avid following among our #StormCrazies: thank you for all you brought our franchise and our community. The Connecticut Sun are lucky to have you.

To Shekinna Stricklen, who came to us in 2012 as our first round draft pick, exchanging the orange and white of her Tennessee Lady Vols jersey for the Storm pine green: you came to us right out of college and our fans got to cheer you on as you developed your game and improved your skills. May you continue to progress and enjoy life in the Northeast. 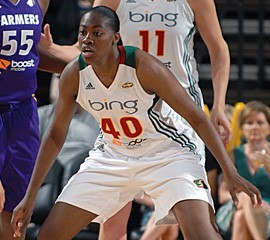 These women will be fine. Their careers will go on. But shouldn't we take a moment to allow ourselves to feel the fullness of our connection, even as it changes and begins to fade?