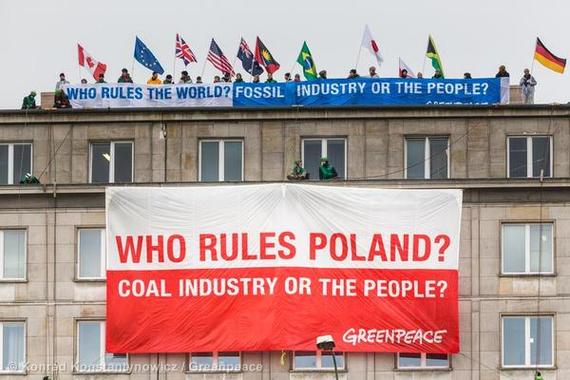 With the legal powers he holds as president, Obama could both sign and implement a treaty on climate. It's not surprising this confuses people. Americans learn in school that the U.S. Senate must ratify treaties, but this simplistic view of 'treaties' is sometimes wrong. It's important to know that Obama advocating against legally binding obligations is a political decision. If national leaders follow Obama, they are agreeing with him that stopping global climate disruption only merits a voluntary effort.

Treaties in international law mean agreements with legally binding obligations. But U.S. law only considers agreements to be 'treaties' if they require new legislation. Obama could sign a climate treaty in Paris. And if by some miracle, the denier-crippled Congress gets its head out of its smokestack by the treaty deadline in 2015, they could tell the president to be more ambitious in the final agreement.

With the exception of obliging the U.S. to new public finance contributions, since he needs Congress to appropriate new money, Obama doesn't need legislation to implement a climate treaty. But it's also the height of presidential impotence to assume Congress would not be convinced to do anything on climate by 2020, when the U.S. wants the agreement to be implemented. Regarding climate pollution at home, Obama can use EPA and other parts of his administration under existing laws. EPA was directed by the Supreme Court to deal with climate pollution under the Clean Air Act.

I wouldn't say the legal footing for signing and implementing a climate treaty enjoys consensus, but it's far surer than the basis for killing people abroad with drones, or tapping foreign leaders' mobile phones. Even if Obama had only a dubious legal argument to do something no president has, climate is one issue that needs bombastic leadership.

I'm not asking Obama to be as brave as the Arctic 30. But if Obama had truly internalized what he says in his climate speeches, I believe he would be activist about his legal abilities to do something about it. He'd say to polluter industry lawyers, 'bring it on.' It is unfortunately inevitable, no matter how weak the climate policy, that it will be challenged by immoral law firms representing faceless climate opponents like the Utility Air Regulatory Group (UARG). But UARG members like Duke Energy (Jim Rogers) are going to have an increasingly difficult time convincing people they have any legitimacy investing in coal, oil, and gas. There will come a day that being for climate impacts is a not a winning political strategy.

Experience teaches it might be foolish to hold our breath for Obama on a climate treaty.

Twice Obama has dismissed U.S. participation in a climate treaty. He could have signed a treaty in Copenhagen, which he opposed despite winning a Nobel Peace Prize in part for what could become one of the all time travesties of climate diplomacy. And, before that, people forget that he could have recognized Clinton's signature of the Kyoto treaty. Instead, Obama chose to accept Bush's decision to 'un-sign' Kyoto.

The president already knows what he can and cannot do, but his climate negotiators have done a great job convincing other countries that Obama is legally constrained at home. The constraints are largely self-imposed. Obama is simply deciding climate isn't a key issue for investing (or building) political capital. In a clear illustration of Obama dragging down the negotiations, French Minister Pascal Canfin agreed in a conference recently that because of the (alleged) U.S. inability to ratify, countries must make legally binding commitments at home with a global agreement that is voluntary. Canfin may have been misled, as he is proposing to let the hyperpower keep 'leading from behind' when it comes to doing as little as possible on climate.

Despite the current absence of federal leadership in the United States, I have confidence we will take strong action domestically. There is plenty of evidence the country is moving in the right direction in terms of popularity of climate action, new local policies, the energy market, and even greenhouse emissions. The rise of strong action outside of the United States, including countries negotiating a legally-binding treaty in Paris, will only help. And, who knows? As American national politicians become embarrassed by polluter brown-nosing, and afraid of an out-competed energy industry looking more and more archaic, maybe the U.S. will come running.