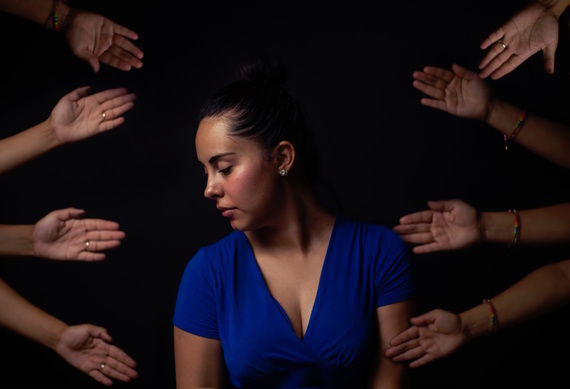 This article was first published at Wear Your Voice Magazine.

"You can't go out looking like that and not expect that people will touch you!" said the drunk woman at our local pub, angry that I wouldn't let her touch my brown face, my breasts or my tattoos. That still didn't stop her from trying again to touch me, as my ribs pressed into the bar and my hands were up, blocking her, until she finally stormed off.

I'm a peculiar ethnic mix that provokes the dreaded "What are you?" -- so I am no stranger to people asking me intimate questions about my heritage before they can even correctly pronounce my name. Being a heavily tattooed brown woman, I am also no stranger to men and women alike running their hands over my tattoos without permission.

These (white) individuals believe I owe them explanations of who I am so they will know where and how to file my brown presence with a suitable label, thereby establishing my validity as an American. These (white) individuals believe it's their right to put their hands on me because I am different from. Ultimately, these these are questions of (white) entitlement over people of color's bodies, because it's never brown or black people who ask invasive questions or cross physical boundaries. They probably have it happen often enough to understand how degrading and humiliating it is to have someone treat you like a zoo or sideshow exhibit.

The Other doesn't have a right to boundaries. The Other exists for someone else's consumption. The Other is public property. The Other isn't quite human, so regular rules of decorum don't apply.

Just a couple hours after news outlets called my home state of Florida for Donald Trump, I walked over to my local pub. I was too amped to sit at home and knew my friend was working. I put my bag on the seat between me and a regular, took my notebook out and began writing. A man came over and asked if anyone was sitting where my purse was. Yes, I told him. "Can I sit there until they arrive?" No, I said. "Oh, come on," he whined. No, I said again. The man proceeded to lean over the stool, rest his arms on the bar and strike up a conversation with the man next to him, accidentally grazing my arm on purpose over and over again. I said, "Hey, there's plenty of free seats on that side of the bar." "I'm fine here!" He smirked at me, his potbelly pressed into my bag. Disgusted, I grabbed my bag and moved seats. All the while, he's smug-grinning at me.

I couldn't help but think of our president-elect and his pussy-grabbing comments, which have reinforced the idea that women are just objects and men are entitled to do what they want with them. Consent is irrelevant.

Add into the mix Trump's rhetoric about deportation forces and banning Muslims from the United States, which has created a new monster of perceived immigrant or Muslim status, one to which the South Asian community (of which I'm a member) is particularly vulnerable -- even though many Desis did, in fact, vote for Donald Trump.

I, on the other hand, did not consent to this presidency.

In a perfect world where I am not actually afraid for my own safety, I would have loved to engage that blonde woman in a dialogue about consent and the fact, that no matter how appealing someone's body may appear, you aren't entitled to fondle it without permission.

In a perfect world, I would have loved to explain to that man who inserted himself into my space without permission that "no" is a complete sentence, and regardless of whether you like, it means something.

But I've come to understand that we live in a post-truth world, a world where facts and science are rendered meaningless if one's own personal opinion doesn't coincide, a world where a huge segment of the population finally feels that the power dynamic has reverted back to its rightful place, in the hands of white people who object to the changing face of America and see no value in an inclusive society.

The sad thing is, these instances that happened to me on election week feel like the start of a pattern that will make it difficult for me to leave the house and actually look people in the eyes. There is no way to know who has been emboldened by the Pussy-Grabber-In-Chief and his racism, homophobia and xenophobic tendencies. There is no way to know if or when I would be in actual physical danger until it's already on me. I live in Trump country after all, and we know how much they like their guns.

The psychological impact is already beginning to take a physical toll, and I'm fighting every one of my instincts to get the hell out of America before things escalate. My heart breaks every time one of my friends posts about how their child was bullied, verbally abused, or told that they and their families will be getting kicked out of the country now that Trump is president because they or their parents are Latino, Muslim, immigrants, LGBTQ. I've gone ahead and shaved my head in preparation for whatever SS equivalent Trump will instate to round up brown people for our stays in internment camps.

Where does all the work and progress that feminists have achieved since the 1970s go from here when we have an admitted sexual assaulter as Commander-in-Chief? One who has vowed to strip women of our hard-earned but still-not-quite-equal rights? How do we begin anew with the education process around consent and bodily autonomy? More than anything, I wish I had these answers, because from where I'm standing, life in America just got a hell of a lot bleaker.