"You yourselves have seen what I did to the Egyptians, and how I bore you on eagles' wings and brought you to myself" (Exodus 19, 4)

There is almost nothing like the month of November in New York, especially this November, which seems to have forgotten all about the winter. Yes, it is about the holidays in the air, the lights and the general cheer (in spite of all that goes around us in the world, or maybe because of it), but not just that. This is the month of Thanksgiving, the ultimate time to give thanks and be grateful for so much. It is the time to observe, look deep within and truly appreciate the simple things, which we tend to take for granted. This is when I take a look around me, and say thank you for who I am, for where I am and for those who made it all possible for me.

In 2014, the Government of Israel designated by law the day of November 30 as the annual day to commemorate Jewish refugees from Arab lands. In the aftermath of the declaration of the State of Israel and the establishment of the State, some 850,000 Jews from all over the Middle East had to flee their homes, as violence struck them and their properties seized and assets confiscated. Their ancient communities were destroyed and they were heading back to their ancestral land, to the Land of Israel.

"On eagles' wings" is how my grandparents arrived in Israel in 1949. That was the name given to the mass exodus of the Jewish community in Yemen, who arrived in Israel on chartered planes (none other than Alaska Airlines, by the way) only to see the Holy Land they had dreamt of for so many years, for the first time. The Jewish community in Yemen was a secluded one, separated and isolated from the rest of the Jewish communities scattered around the globe, keeping their ancient customs for centuries and the language of olden times. So was their faith, innocent and pure, as they wholeheartedly believed in the coming of the eagles to take them back to Zion, to Jerusalem, to the land of Israel which they mentioned repeatedly in their prayers. And so, I grew up listening to my grandparents' tales of wonder and awe, as they made their way to Israel, always appreciative of the fact they were fortunate enough to witness this miracle in their lifetime. One of the most memorable images was that of the Yemenite Jews, as they disembarked the airplane in Israel, kneeling down and kissing the ground. Kissing the Holy Land for the first time. They were home.

That image and those stories are forever seared into my mind, as I go about my life today. Where would I have been, if it weren't for the state of Israel? What would have my fate been, if it weren't for those Alaskan eagles landing from the sky and taking my family to Israel?! Would I have been alive today? Would I have survived the animosity and violence against the Jewish community? Would I have been able to escape the battleground between those loyal to the Shiite Islamic Republic of Iran and the forces of Sunni Saudi Arabia, which is Yemen today? I don't know, but I can tell you I am very happy I do not have to find out.

Israel, in its current form, is a relatively young state, almost 70 years old. However, it is old enough to have several generations who were born and raised in the independent state of Israel. They knew no exile and experienced no diaspora. They are Israeli born and bred, proud and living in a free Jewish state of their own. This is our time to remember those Jewish refugees who lost everything when Israel was established, and gained everything when Israel was established. This is my time to be grateful for all who have made Israel what it is today, in spite of all external and internal challenges: a light unto the nations, and the place I call home. 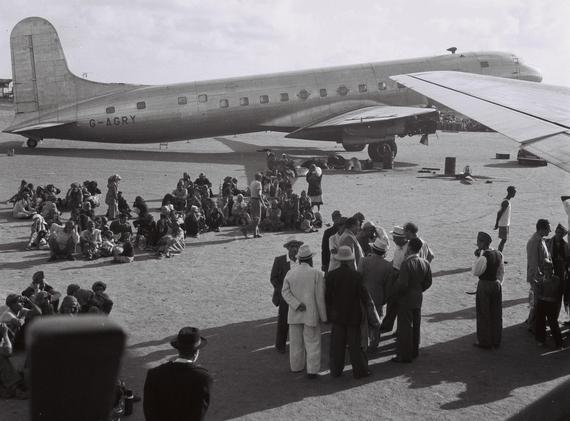