On Sunday, 19 February, HBO will start airing my third sitcom. It's called Life's Too Short. It's a return to the fake documentary format like The Office. But if The Office reflected those quaint docu-soaps of the 90s that followed ordinary people having their 15 minutes, Life's Too Short reflects the more modern age -- desperate, fame-hungry monsters who will do anything just to be on the telly.

You know, so-called role models living their lives like open wounds to accumulate column inches, so they can then get some ghost-writer to spread those inches over several "autobiographies" to cash in on their infidelity, drug abuse, life of crime and personal tragedy. You can't help but think many should have called a doctor before they called a publicist.

I was willing to be the center of attention in a small group of friends for saying something funny. Even interesting. I wanted to be the funniest person in the room, not the most famous. I never knew I was honing a skill that would eventually transcend sociability to become a lucrative career. In fact, I never really thought about even having a career.

I used to be the laziest, least ambitious person I knew. Well, lazy in terms of work. Career success, if you will. I had artistic ambition, I guess, but being a working-class Brit I believed it was better to never try than to try, and run the risk of failing. Americans are brought up to believe they can be the president of the United States. British kids are told, "Don't be stupid. It won't happen for you."

I suppose I was cursed with some early success. I was smart. The smartest kid in my class. Then the smartest kid in the next class and so on. I actually used to pride myself on the fact that I didn't have to even try to pass exams. This is my greatest regret. It's a disgusting attitude and potentially a waste of a life. Writing and directing The Office was the first thing I ever tried my hardest at. The reward was revelatory.

At 40 I was addicted. Not to success. I was addicted to trying my hardest. That's the reward in itself. It's what life's about. The struggle. It's the only way you can be proud. You can't be proud of luck.

Born clever? So what? What are you going to do with it? Your best, I hope, and no less.

I started late, sure. But it really is never too late. Now I seize the day. And I love that day much, much more. I'm a workaholic. But as Winston Churchill said, "If you find a job you really love, you'll never work again." Well, I feel like I'm working, but that's the bit I like. I'm not proud of earning a million times what a nurse earns. I can only be proud of working as hard. And even then I feel guilty about loving the hard work. My only hope is that nurses love their work too. 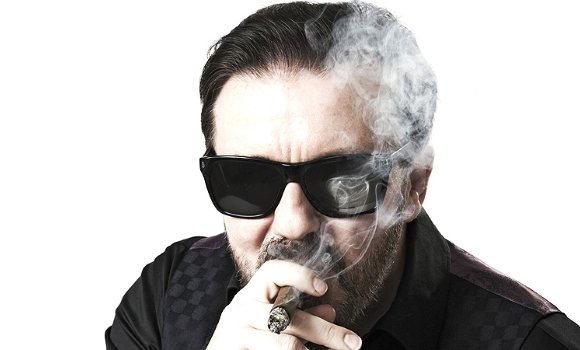