I received an email recently from a woman who liked my novel but took me to task for "breaking the curve" of what's expected of women by writing a novel while mothering five kids. Shortly afterward, another reader suggested that based on my complicated description of motherhood, maybe I shouldn't have had children.

Those readers, they say the darndest things.

Authors I know have been offered all sorts of unsolicited opinions from readers -- told that wearing brighter colors would be more flattering, or that they should hurry up and have children. Authors I know have also been showered with great kindness, and received long, heartbreaking letters from people for whom the novel was a sort of acknowledgement of their pain.

People are funny in the things they'll say and do to strangers, the things they'll confide and the ways they'll criticize. I knew this from the odd comments I've gotten from people who see me out with my five children ("You are living my nightmare" is my favorite). But publishing a novel takes public commentary to a new level.

What is it about the experience of reading a book that makes readers reach out to authors in such a personal way?

Is there something proprietary that takes place in a reader's mind once he or she has spent hours and hours reading a writer's words? Or an unwritten contract between the writer and reader that opening one's veins onto the page makes you blood brothers? The argument's been made that when writers write about a certain subject -- particularly in memoir --they're asking for it.

Or maybe it's partly because in this tough publishing climate, writers have to make themselves so accessible--not just at bookstore readings, but on Twitter, Facebook, and Skyping into people's living rooms for book clubs. There seems to be a growing chumminess, or at least expectation of chumminess, that exists between readers and writers.

I asked a handful of authors, What is the most unusual thing you've had a reader say or do? The examples that follow show, among other things, that some readers and audience have real cojones.

Nichole Bernier is the author of the novel THE UNFINISHED WORK OF ELIZABETH D. (Crown/Random House).

On Fandom: I Love Your Book, I Love You, We're Soul Sisters, I Hate You
Weirdest Things Fans Have Said To Authors 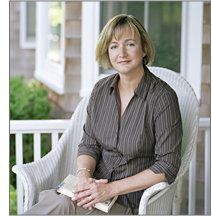 1 / 14
Helen Simonson
A man emailed me to say he had not read my book (it's surprising how many fan emails begin this way), but that he had once lived in England, where <em>Major Pettigrew's Last Stand</em> is set, and that his wife ran off with a retired British army Major. He said his long and burning rage against the British was largely gone, but his girlfriend thought he should read my book to deal with his lingering resentment issues. What did I think?