I sent my half-sister a link to my Feminist Mama Manifesto, which I posted a few weeks ago and her response was, "I'm proud of you, but I like being a girl."

This is the crux of women's negativity towards feminism. I like being a girl.

I, too, love being a woman. As a child, I loved girly things, and I'm not embarrassed by that. Feminism does not mean you want to be a man. It means that it is as OK to be a woman as it is to be a man. 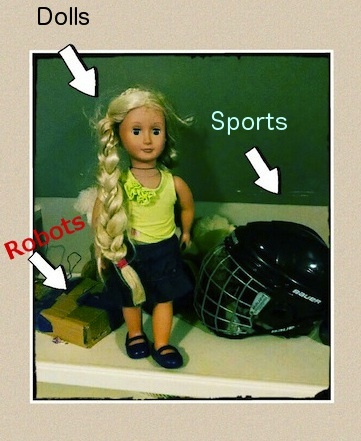 Here's a picture of a shelf in my boys' playroom. It has a non-sexualized pretty doll that you can dress in a variety of outfits. There is a hockey helmet. There is a homemade robot made of cardboard, wire, and tape. If I had girls instead of boys, I would expect the shelf to look pretty much the same. Feminism means I don't believe in girl toys or boy toys.

It's fun to play with dolls. I yearned for a baby doll more than anything. My mother at first refused, because she didn't want to "train" me to be a little housewife. I was a pretty stubborn little girl, so I made my own doll out of a blanket and a bag of kitty litter. That's when my mother changed, and realized nurturing babies was not gender specific. That's why my youngest son has a baby doll that says Dada as well as Mama.

I even liked Barbie dolls. My friend's Barbie Dream House was on my letter to Santa each year. (He never came through.) The problem I have with Barbie is her unrealistic proportions and dramatically sexualized figure. Why don't they make PlayBoy Barbie? Because they are all molded to look like a Playboy Bunny already. Most women do not have boobs bigger than their head. Most women do not have a waist smaller than their neck. (Yes, I'm exaggerating here, but we've all seen Barbies. I'm not far off.)

Some people have an issue with Lego's new marketing campaign towards girls. I'm not against pink legos. I would totally have played with legos more if they came (like they do now) with pink and purple bricks and little flowers. I'm against labeling that implies they are just for girls. Feminism is about not telling my sons that pink is only for girls.

Feminism means we all start off with the same rights and expectations at birth, and that doesn't change as we get older. It means funding for girls' sports is equal to funding for boys. I wanted to play field hockey more than anything as a kid, but when I saw the all-girls school I attended required their field hockey team to wear short plaid skirts I felt my first taste of feminist fury. I refused to try out for the team. My protest changed nothing - it just meant I didn't get to play field hockey.

Let's talk cheerleaders. Cheerleaders are awesome athletes. I like to see them compete in meets. I think cheerleaders should cheer girls' sports as well as boys' sports. But I don't think they should wear tiny skirts to do so, because they are athletes, not sex symbols. Wearing short skirts is fine, but it shouldn't be required, especially when it is completely impractical to do so. No one should see your underpants, even if they are spankies the color of your uniform. No one should see boys' underpants either, and the fact that boys uniforms hide theirs and girls' uniforms show them off is a big problem for me.

I am not against wearing skirts or high heels. In fact, I like to wear skirts when it's warm. Schools with dress codes should allow boys to wear shorts if girls can wear skirts. Feminism means anti-sexism, not anti-men.

As a woman, feminism means I can wear a skirt or pants to work and be treated the same. Dress codes requiring women to wear skirts, or office culture that rewards women who do, infuriates me.

Feminism means if I am a stay at home mother, I am still an equal partner in the relationship, and my contribution to the family is seen as valid. My husband is not allowed to dictate what I can and can't do. I am as much of a grown up as a man, and the father is as much of a parent as the mother. Housework is not gender specific. I am capable of taking out the trash or mowing the lawn.

Feminism means if I chose to work, I am paid the same as a man doing the same job. I am offered the same promotions. It means being assertive isn't called bitchy.

If I go to a bar and wear a skirt and high heels, feminism insists I have a right not to have strange men grab my ass, or worse. It's OK to want to feel sexy. It's not OK to be called a slut or a skank for doing so. Nothing a woman wears gives anyone permission to denigrate or harrass them.

Feminism doesn't mean I don't want to be a girl, or that I don't like traditional girly things. Feminism means I have a choice to do so, and a society where it is safe.

There's a certain segment of women who think that feminism gives them permission to act like the worst kind of chauvinistic man. I've seen women grabbing other women's breasts at bars and thinking it's OK because they are women. I've heard plenty of women denigrate men in the name of feminism. This isn't progress. Feminism is about respect for everyone.

I believe in manners. That means if I reach a door first, I open it and hold it for whomever comes behind. That means I realize it is my obligation to pay for things as often as my date does, and it is my obligation to treat my boyfriend with the same thoughtful gestures women often expect from a man. Being a feminist doesn't mean I don't want someone to send me flowers, it's understanding that we both should be surprising each other with sweet gestures.

(I had a male coworker whose girlfriend sent him a manly plant basket with a few flowers in it. He was so embarrassed that he gave it to his secretary. Why aren't men allowed to like plants or God forbid flowers?)

It's easier to say what feminism is not:

You're told by your husband that not allowed to work until the kids are in school.

Your boss is nicer to you when you wear a skirt.

Your male coworker is paid fifty cents more an hour for cleaning the same office as you.

Your boss tells you he's uncomfortable hiring a male assistant, because that would be denigrating.

Your boss hiring you because you were the only applicant that didn't have children.

Your female construction company is hired for a job because of minority status, but only all-male companies actually preform the work and send you a cut.

You wear a short skirt to a bar and strange men grab your ass when you're dancing with your girlfriends.

You walk down the street and strangers whistle at you while grabbing their genitals, asking if you want some of this. You don't respond because you are afraid.

It's not about not liking to be a girl or woman. It's about both sexes being valued and respected equally. It's about your body not being as important as your brain.