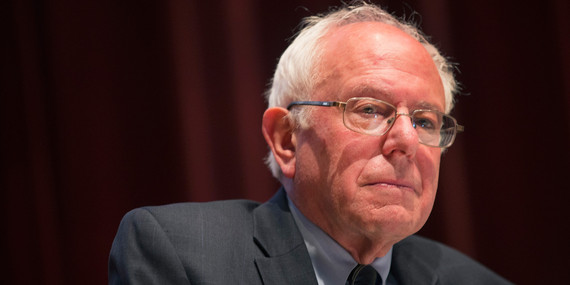 When evaluating the two choices for Democratic nominee, it's important to emphasize that voters will decide upon the next Commander in Chief. I state exactly why I'm only voting for Bernie Sanders in this YouTube segment, primarily because the next president will have monumental choices to make in terms of foreign policy. Because the presidency in this era of American history has more power to wage war than ever before, it's imperative that our Democratic nominee act more like a Democrat, than a Republican, on the topic of foreign policy.

The last time Congress declared war was in 1942. Bloomberg writes that nowadays, "Presidents cite unconventional threats and the need for flexibility and speed to deploy military force, sometimes with Congressional approval, sometimes without."

Although the Constitution states that only Congress can declare war, the War Powers Act of 1973 gives the President 60 days to send troops into battle without Congressional approval. Congress must vote to prolong a president's decision with funding or a resolution thereafter. According to Cornell University Law School, new legislation was needed after "the Kennedy, Johnson, and Nixon Administrations had spent nearly a decade committing U.S. troops to Southeast Asia without Congressional approval."

After 9/11, Bush expanded the war powers of the presidency with the Authorization for Use of Military Force against al-Qaeda. Today, President Obama is using the AUMF to fight ISIS and other terrorists, primarily in the Middle East.

Essentially, a president doesn't need Congressional approval to wage limited wars, or airstrikes and special operations missions. With prolonged wars like the fight against ISIS, President Obama has simply used Bush's AUMF, and the next president can do the same thing, with little obstruction from Congress.

In other words, the next president will decide if American ground troops are sent back to the Middle East, or limit operations only to airstrikes, drone strikes and covert missions against ISIS and other groups. Already, President Obama has sent American soldiers back to Iraq and prolonged our stay in Afghanistan, so the writing is on the wall pertaining to yet another American counterinsurgency war in the region.

Will our nation go in a hawkish direction?

Vox writes that Hillary Clinton will pull the Democrats -- and the country -- in a hawkish direction.

Will the same people who advocated the Iraq War influence our next president?

There's a reason The New York Times asks Are Neocons Getting Ready to Ally With Hillary Clinton?

After the Iraq and Afghanistan wars, and the Middle East in shambles from Bush's decision to bring "democracy" to the region, who do you want as the Democratic nominee?

The decision for Democrats in 2016 is clear.

Hillary Clinton is a hawkish former Secretary of State more aligned with the GOP's view of foreign policy than most Democrats. This sentiment isn't controversial; even conservative historians agree that Clinton's foreign policy will be "neocon."

But Exhibit A for what Robert Kagan describes as his "mainstream" view of American force is his relationship with former Secretary of State Hillary Rodham Clinton, who remains the vessel into which many interventionists are pouring their hopes...

"I feel comfortable with her on foreign policy," Mr. Kagan said, adding that the next step after Mr. Obama's more realist approach "could theoretically be whatever Hillary brings to the table" if elected president. "If she pursues a policy which we think she will pursue," he added, "it's something that might have been called neocon, but clearly her supporters are not going to call it that; they are going to call it something else."

Therefore, when interventionists are looking towards Hillary Clinton to espouse a foreign policy that one conservative historian refers to as "necon," Democratic voters should pay attention.

There's no use in being a "Facebook liberal," gleefully spreading memes (as if disparaging Republicans made you different, while you vote for a hawkish candidate) about Bush, Cheney and Rumsfeld, if you're voting for Hillary Clinton; a hawkish Democrat with a foreign policy more aligned with Bush than Obama. If anything, Clinton has tried to distance herself from Obama on the topics of war and foreign policy. When CBS News writes Hillary Clinton seeks distance from Obama on foreign policy, it's because the former Secretary of State wanted to espouse a more aggressive foreign policy, not the "don't do stupid stuff" policies of President Obama.

For example, Clinton once wanted to arm the Syrian rebels, even though the U.S. is now suspending its program to train the Syrian rebels. Whereas critics of Bernie Sanders's proposals always ask where the money will come from, it's shocking nobody questioned the $500 million cost thus far from our recent attempts at arming the rebels.

Like so many other of Clinton's decisions on foreign policy, from Iraq to bombing Libya, arming the Syrian rebels wasn't the right call. Time magazine writes that, "The New York Times, citing anonymous sources, reports that the program, which cost $500 million, has not been found to be effective..."

But forget about the $500 million and $2.4 billion, how on Earth does Bernie Sanders plan to pay for free public college tuition?

As for Clinton's Iraq War vote that she eventually deemed a "mistake," one reason Obama defeated Clinton in 2008 was that he opposed the war. A 2005 USA Today article titled Clinton says insurgency is failing highlights why Clinton might not be as qualified as supporters believe to become Commander in Chief:

BAGHDAD (AP) -- As 55 people died in Iraq on Saturday, the holiest day on the Shiite Muslim religious calendar, Sen. Hillary Clinton said that much of Iraq was "functioning quite well" and that the rash of suicide attacks was a sign that the insurgency was failing.

"The concerted effort to disrupt the elections was an abject failure. Not one polling place was shut down or overrun," Clinton told reporters...

"It's regrettable that the security needs have increased so much. On the other hand, I think you can look at the country as a whole and see that there are many parts of Iraq that are functioning quite well," Clinton said.

According to Clinton in 2005, however, much of Iraq was functioning quite well.

Not only was Clinton's Iraq War vote deemed a mistake, but The Week has an article titled Don't let Hillary Clinton escape the blame for Libya's anarchy.

From Iraq, to the Libya bombing advocated by Secretary of State Clinton, to weapons deals to donors of the Clinton Foundation, the meaning of "qualified" is now just as muddied as "convenience," "evolve," and "mistake."

In contrast, Bernie Sanders says "I'll be damned" if we send more Americans back to the Middle East to fight wars for Saudi Arabia and other nations. Bernie Sanders won the prestigious Congressional Award from the Veterans of Foreign Wars. John McCain is quoted recently as saying Sanders has a better record on veterans than Hillary Clinton. As for a costly Iraq War vote, Lincoln Chafee is right that Clinton should be disqualified from running, stating, "I don't think anybody should be president of the United States that made that mistake..."

Ultimately, Americans need a man who passed the test of history by voting against the war, and stating the following in 2002:

Fifth, I am concerned about the problems of so-called unintended consequences. Who will govern Iraq when Saddam Hussein is removed and what role will the U.S. play in ensuing a civil war that could develop in that country?

There are numerous other reasons to vote for Bernie Sanders over Clinton, but foreign policy should be the biggest reason, considering the unilateral powers of a president.

In 2016, only one Democratic candidate is a real Democrat on foreign policy. The other has interventionists "pouring their hopes" into her presidency. Don't complain about Bush, Cheney, and Rumsfeld if you make the wrong choice in 2016.