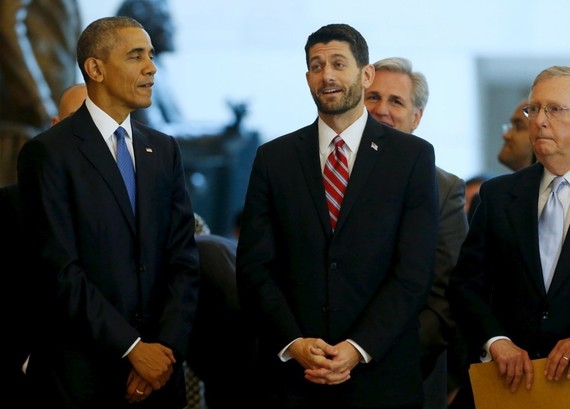 To Democrats, President Barack Obama's final State of the Union address in front of a national audience was quintessential Obama: full of vigor, a yearning hope for the future, and a self-confidence that the legislative programs and policies that his administration has successfully pushed over the past seven years will transform the United States into a safer, prosperous, and more innovative nation.

To Republicans, Obama's speech was "same old, same old;" littered with partisan jabs at congressional Republicans who outline a different vision for America, an arrogance that his health care overhaul will eventually be labeled as a transformational moment in American history, and a performance that emphasized the dangers of climate change more than the deprivations of the Islamic State. Donald Trump, the man who continues to lead the Republican presidential field nationally and who loves to take to Twitter to live-tweet events from politicians he dislikes, called Obama's last State of the Union "really boring, slow, and lethargic - very hard to watch!"

None of these criticisms will weigh too heavily on President Obama, who is probably genuinely excited to get out of Washington, D.C. after his second term expires in January 2017.

Yet he still has twelve months left as the leader of the free world, and President Obama wants to make the most of it. This goal will be especially difficult for the President to achieve on foreign policy. Indeed, while presidents historically have far more leverage and ability to move on matters of national security than on domestic priorities like tax reform, entitlement reform, or immigration reform, some of the loose-ends that the Obama White House wants to tie up before leaving next year will require some type of cooperation from the U.S. Congress. Needless to say, this cooperation is unlikely to happen; not only is 2016 an election year when lawmakers usually revert to caution in order to not rock the boat and risk their jobs with bold new initiatives, but the Congress is dominated by a Republican-led House and Senate in no mood to give the administration any favors when the presidential race is beginning to heat up.

The top campaign promise that has yet to be fulfilled -- finally closing the military detention facility at Guantanamo Bay -- will be exceedingly difficult (if not impossible) for President Obama to fulfill without a sign-off from a Congress dominated by Republicans who consider the prison an important counterterrorism tool and a safe place to imprison and interrogate terrorists who are captured by U.S. forces on the battlefield.

"I will keep working to shut down the prison at Guantanamo," Obama declared to loud applause from Democrats in the House chamber. "It's expensive, it's unnecessary, and it only serves as a recruitment branch for our enemies."

Unfortunately for Obama, shutting down Gitmo won't be as easy as flicking a switch. Thanks to repeated defense authorization and omnibus appropriations bills that forbid any federal dollars from being spent on transferring Gitmo prisoners to U.S. soil, closing the facility, or even modifying U.S. prisons for the purpose of housing detainees in the future, the administration is left with a seemingly endless problem. How does one shut down a prison when congressional statute explicitly rules that option out?

We are likely to see a rejuvenated determination from the President and his national security team to accelerate the rate of transfers on those detainees who have been cleared by the inter-agency for release. Americans can also expect a comprehensive plan from the White House on the steps it intends to take in order to close Guantanamo down, where the remaining prisoners will be sent, and how much that effort will cost. Ultimately, however, that plan -- whenever it's finally released -- will not receive the kind of political support from Republicans that is needed to begin making Obama's dream into a concrete reality. Unless President Obama is comfortable with once again going around Congress and issuing what would be the most politically explosive executive order of his presidency, the prison will continue to stay open into the next administration.

President Obama would also love for Congress to formally endorse his counter-ISIL military campaign by debating and finally passing a fresh authorization for the use of military force (AUMF). Notwithstanding its initial draft AUMF last February, which died as soon as the document landed on the dais of the Senate Foreign Relations Committee's, the administration has been more than willing to prosecute the war under the 2001 AUMF -- without the painstaking worse of asking for additional authority from Congress. Yet the White House still realizes that it would be better for Congress as an institution to be on record by authorizing an ISIL-specific AUMF instead of relying on a war resolution that is over fourteen years old. Again, the chances of Congress passing an AUMF that everyone can live with is slim to none, particularly if you believe Senate Majority Leader Mitch McConnell.

Finally, the President called on Congress to lift the 55-year trade embargo on Cuba in order to definitively signal to the Castros that Washington is in fact serious about turning a page in its diplomatic relationship with the island nation. Obama has done all he can do unilaterally as Commander-in-Chief, from loosening travel restrictions, increasing remittances, and re-opening the U.S. Embassy to meeting with Cuban President Raul Castro on a number of different occasions. Only Congress, however, can terminate the embargo -- a change in the law that is not going to happen this year given the vast majority of Republicans and a significant number of Democrats who remain wary or firmly opposed to rewarding a regime that continues to imprison peaceful political activists and restrict the freedom of speech, the press, political expression, and political association.

"[I]f we want a better politics," Obama said, "it's not enough to just change a Congressman or a Senator or even a President; we have to change the system to reflect our better selves."

These are wise and revealing words from a Commander-in-Chief who's one true regret was not bridging the partisan divide between America's two political parties. President Obama should continue to expect that this divide will prevail during his last twelve months in office.