After 24 hours of travel, we arrived in Nairobi late Sunday evening, and made a beeline for our beds to get some rest before hitting the ground running bright and early on Monday morning. We made our way back to Jomo Kenyatta International Airport at 7 a.m. to take an early domestic flight to Kisumu, Kenya's third largest city, on the shores of Lake Victoria. Though I didn't know this before, Kisumu and its surrounding Nyanza province is Ground Zero when it comes to infectious diseases: HIV, tuberculosis and malaria, among others, are endemic in the aria, and the highest prevalence in Kenya is found in this region. It also happens to be one of the poorest regions in the country.

We were here specifically to witness the work that the United States Center for Disease Control is doing in collaboration with the Kenya Medical Research Institute (also known as KEMRI), the scientific research arm of Kenya's Ministry of Health. On this particular day, we split up into groups of two, to shadow HIV home health care workers: KEMRI's representatives who travel throughout the region, testing families for HIV, and counseling them on how to reduce the spread of the disease. Because many of the families in the region live in relatively remote rural areas, it can be different (and somewhat discouraging) to travel the long distances on foot to get to the clinics to determine their status -- and so instead, KEMRI and the CDC come to them.

My travel companion for the day, Amy Graff, and I were quickly paired with two health care counselors who were consummate professionals: Sam, a jovial and passionate young man with a great smile, and Grace, his more reserved, no-nonsense counterpart. After they briefed us on what we were about to experience, we set out. 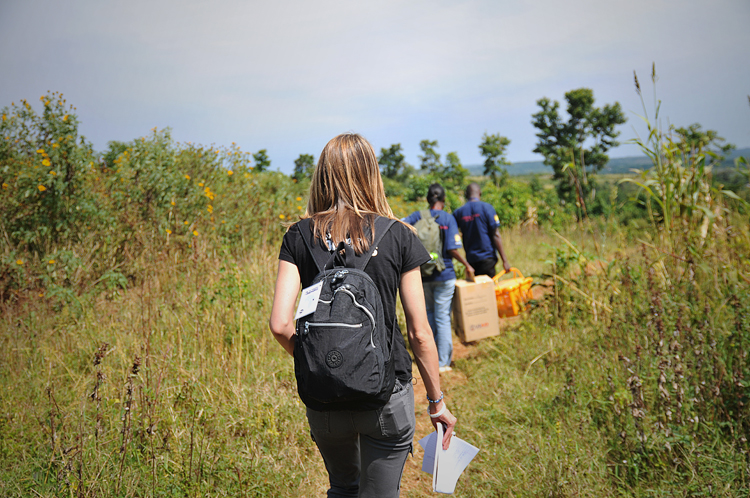 As we were walking, I fell in step with Sam, who was carrying a large plastic container filled with testing equipment on his shoulder. We talked a bit about how he became interested in home health care testing.

"Really? How many do you manage?"

"Eight. I love it. I love helping them give a great service to our clients, you know? I hope one day that I can run a program like this in other parts of Kenya." 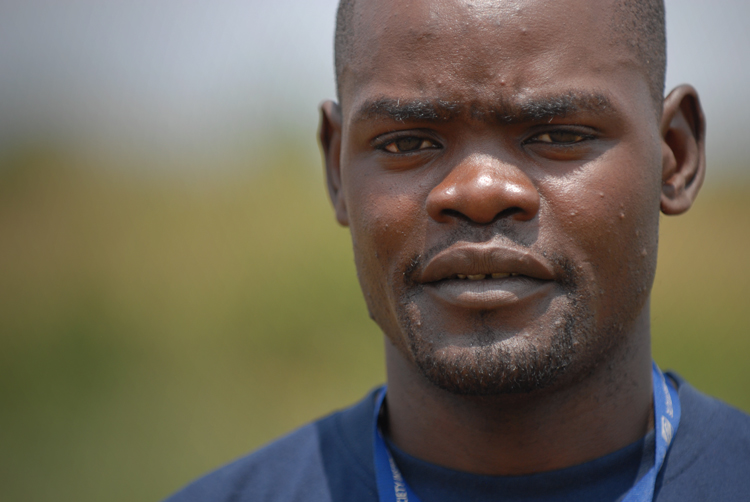 We continued talking and walking, before at last arriving to a small structure made of mud walls and an intricately thatched roof. "This is the family," Sam said. 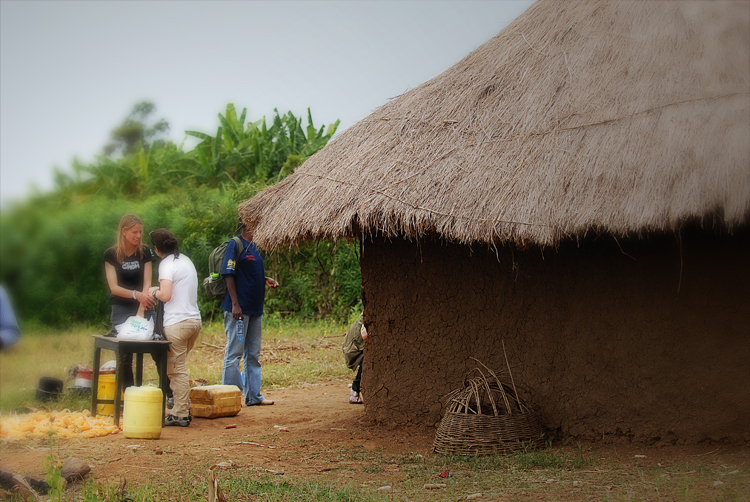 He introduced us to a father, his wife, and their two small children, before they invited us inside to their home.

Once we got situated, Sam made more formal introductions of Amy and me. He explained to us that the family knew that we would be visiting their home today, and consented to us both watching Sam and Grace demonstrate how the test is conducted, and allowing us to write about our experiences online. He also assured us that the family actually already knew their status having been tested about a month earlier, but were willing to undergo the test again so we could see exactly how the procedure was done. Since the family spoke very little English, Grace was there to conduct the testing and counseling session, and Sam was to act as translator for the benefit of Amy and me.

So then, Grace got to work. 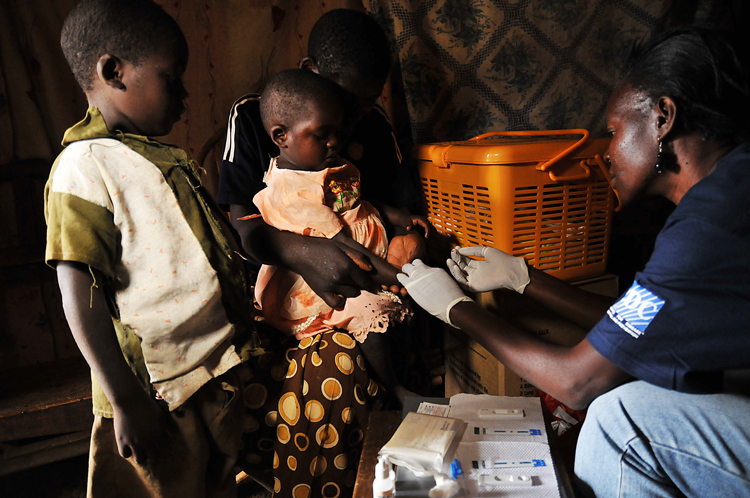 The test itself consists of a pin prick on the finger, where a small amount of blood is collected, and placed on two test strips (two, that is, for double-checking purposes). The test itself takes only about 15 minutes to complete, and is similar to a pregnancy test: if one line appears on the strip, the test is negative. If two lines appear, the test is positive.

In situations such as this one, where the mother is positive, the home counselors conduct further tests on the children, with consent of the parents.

(An aside: these two kids are the bravest kids I have ever seen in my entire life. Remember, now -- they'd already been tested before. But did they cringe when they saw Grace coming at them with the needle again? No sirree, they just offered up their fingers like pros. The only whimpering noise that came from the room was from me, as I watched it happen.)

Here's the best part: once the family knew their status, they were counseled on ways to protect themselves (for example, as in the case of this family, ensuring that they took precautions to ensure that the HIV+ partner didn't infect the HIV- one). The parents were given condoms, shown how to use them (using wooden models), and the HIV+ members of the family were given referrals to a clinic where they can receive medications free from the Ministry of Health.

Since 2008, this home health program has recruited and trained 150 counselors who continue to go door-to-door to provide this type of counseling, testing and household education. In addition, through this program, USAID provides a care package, which includes a jerry can for collecting water in a nearby river, a straining cloth to strain the collected water and drops to purify it, and mosquito nets to help prevent malaria (a huge risk, since the suppressed immune system of someone who is HIV+ makes malaria that much more dangerous). To date, 130,000 people have been counseled and tested, and their is an 85% acceptance rate for the services. In addition, 50% of those testing positive have sought care and treatment.

I'm happy to report that since this family learned their status, they have taken Sam and Grace's counsel to heart, and have already begun to receive treatment. It was amazing and wonderful to witness how, by going and giving this simple test to this family, they were now fully informed and able to take the necessary steps to ensure that they all -- each member -- was able to continue living full, productive lives.

After Grace had finished her work, the father wanted to take us on a tour of his property, showing us the patch where he grows vegetables to feed his family, and taking us for the 10 minute hike to show us the river where his family collects the water they use for drinking and their washing. As we walked, I caught up with Grace and complimented her on her professionalism.

"You're wonderful, Grace," I said.

"Thanks," she replied thoughtfully.

At this, her face broke into a wide smile. "I really do," she said emphatically. "I mean, why wouldn't I? I'm a life-changer!"

Grace, honey, you certainly are. 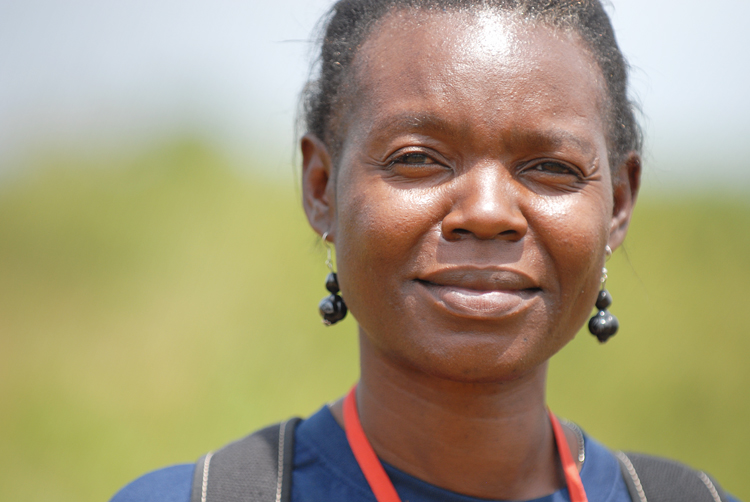 This post was originally published on 08/10/2011 and is being re-featured for HuffPost Global Motherhood.