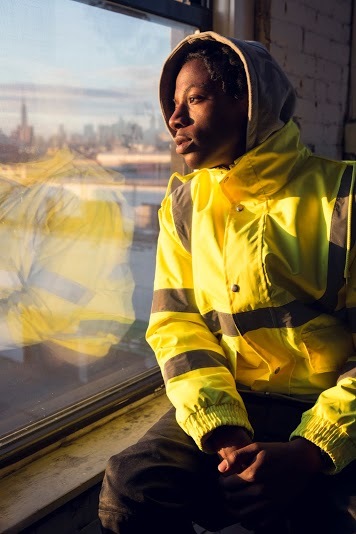 It was with his first mixtape 1999 that Brooklyn's Joey Bada$$ (Jo-Vaughn Virginie Scott) emerged as a rapper birthed from the golden age of hip-hop. He was only 17 years old at the time of his debut mixtape, which includes tracks produced by MF Doom and Chuck Strangers, and yet fused within the musical DNA of the young artist were the same lyrical hues of an age ruled by the likes of Wyclef Jean and Buckshot.

With his first full length album B4.Da.$$ (Before the Money), Joey does not simply conjure the spirit of 1990s hip-hop, but finds that balance between those who came before him and those shaping the future of rap. During a time when so much of hip-hop is saturated with blatant sexual references, we have Joey whose album dropped on what is hard to believe is only his 20th birthday. The album permeates with an introspection and lyricism found in someone much older than Joey's 20 years. From the first beat, the album courses through the evolution of Joey's musical landscape, weaving across sounds evocative of those from the 90s to addressing issues such as class, race, wealth, childhood, and surviving America's current cultural state as a young black man. The track "Like Me" posthumously produced by J-Dilla is a smooth and lyrical track where Joey's masterful hold on words takes shape and reveals cynicism and contemplation: "It's like every step bring me close to destiny/ and every breath I get closer to the death of me/I'm just trying to carry out my own legacy/but the place I call home ain't letting me." The 17 tracks on the album reveal a multi-textured work that expands beyond the golden age as Joey births a new era of hip-hop.

Sirisuk: What time did your day start?

Sirisuk: You definitely were a product of the golden age of hip hop. Do you remember one of the very first records that caught your attention and that you just couldn't stop listening to?

Sirisuk: When did you start writing songs? Do you remember one of the first songs you ever wrote?

Bada$$: Yeah, I do but I don't want to share it with everyone [laughs].

Sirisuk: How old were you?

Sirisuk: You just seem like an older soul. Like I said, it's as if that golden age birthed you.

Bada$$: Word. I mean this is like my third life [laughs].

Sirisuk: Do you have any idea what your other lives were like?

Bada$$: No,I have no idea but I'm very, very sure that this is my third time around.

Sirisuk: The third time's a charm, too.

Sirisuk: Since a lot of your lyrics are like poetry, who are some of the writers you've been reading?

Bada$$: It ranges. I'm getting more into different authors but I just pick up different books that attract me, period. I've read like two Deepak Chopras, I've read Rhonda Byrne's "The Secret." I'm not really too fond of the authors but the literature is a different story.

Sirisuk: What about philosophers? You recently mentioned you're reading philosophy.

Bada$$: I like Socrates and Sri Chinmoy Ghose, the Dalai Lama, and Ghandi.

Sirisuk: I really like how you think music should be inspirational in terms of the way it affects people. I want to talk about your new album. It really does show the sonic evolution you've taken.

Bada$$: I want my listeners to feel just like I did. I want them to feel the same way I did when I started growing up, when I decided I wanted to chase my dreams. You know that feeling, it's almost a feeling of invincibility, it's just like your confidence is so strong and you get the feeling of believing in yourself so much and so hard that you feel that you can do anything. For me, what the whole project is, it's a mind state. Ultimately, it's a mind state and it's that mind state of unlocking your infinite potential and realizing that you can do anything your heart desires. It's in that exact moment when you feel that hunger for it, to become a better person, to make change, that's what it represents. The music that's embodying it is the motivation. Ultimately, my goal is to get people up and start making changes and living life and following your dreams. Just get up and go get it no matter what it is.

Sirisuk: That's powerful, and I can feel that in the album. Also, I saw you on 4/20 at the smoker's club tour here in Brooklyn and I remember when you were on stage. You totally brought that energy. Do you ever get nervous before going on stage?

Bada$$: I don't ever get nervous. My form of getting nervous is actually taking a shit [laughs].

Bada$$: Every time before I go on stage, if there's an ounce of nervousness in me, then it starts bubbling in my guts and I have to go to the restroom [laughs].

Sirisuk: You look completely happy when you're up there, you know. How do you feel when you're in front of everyone?

Bada$$: You have to understand that for us musicians, at least for the amount of us that really do this from our heart, that the ultimate dream is performing it. So when we finally get that chance to present and showcase our talent, it's like a dream come true and it's a very blissful moment for us. It's a whole adrenaline rush. I could crack my ankle, and then if I go on stage it will be painless. Like I won't feel anything until I come off it again.

Sirisuk: It's like you're reaching a state of mind when you're up there too. Did you write most of the album in different locations?

Bada$$: I mean most of it was definitely written in once place but it brings influences and energy from all over the world because in the midst of making this album I've been doing my traveling, I've been exploring things, finding different places and I bring that energy back home. I put it into the music, so definitely composed in one place in the city but the energy it brings is from London, from Australia to California to all over the world, you know.

Sirisuk: Who were you excited to work with on this album?

Sirisuk: Within your life, who are some of the fundamental influences you've had?

Bada$$: Probably my mom. My mom influences me a lot. She's very smart so she pretty much molded who I am today. She didn't pretty much do it, she did just that [laughs].

Sirisuk: After you're away for so long and then come back to Brooklyn, what's one of the first things you like to do?

Bada$$: One of the first things I like to do is take a walk in the city. Just take a walk by myself listening to music, headphones on blast.

B4.Da.$$ is currently out via Cinematic Music Group. For more information on Joey, visit his Facebook page.