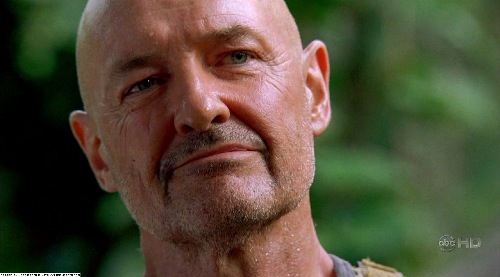 Poor Locke. Last night's episode showed that from the day he was born, he just has no luck. He was born premature after a car hit his pregnant mom, his mother left him, and he had that creepy Richard Alpert trying to steal him away. He was locked in lockers, (aren't the writers funny?), physically and mentally abused by his con man, father, lost the girl of his dreams, and wasn't allowed on Matthew Abadon's suggested "Walkabout". Will this guy ever get a break?

According to Ben, probably not. "It's tough being the chosen one" and "Fate can be a fickle bitch" don't sound too promising for Locke's happy ending. Last night's episode seemed to be a changing of the guard for the island. Ben seemed very removed and laid back allowing John Locke to take his place as the voice and protector of the island. What does Locke have to do to save the Island from the menacing Keamy and his force? Nothing much really - just MOVING the Island!

They're Gonna Need a Bigger U-Haul

Locke's venture to and time inside the cabin was very interesting. The looping Horace Godspeed, supposed creator of "The Cabin," sent Locke on his way. The real interesting moment was the events that took place in the cabin. Why was Christian Shephard representing Jacob? Why was Claire there? Is she dead now or something?

Of course the big shocker, the "Wha?" moment was Locke's message from Jacob on how to save the island: "We have to move the Island." Move it where? Physically? Or move it through time? To me, the one that makes the most sense would be to move it through time rather than to another location. With all of the time and time travel references, it seems to make sense. Physically moving it? Not so much.

Yeah, out of all the bad guys on the Island - past, present, and future - Keamy has to be one of the most dangerous ones. Not because of how big he is, or the weaponry, but his willingness to kill at the drop of a hat. That doesn't bode we'll for our Losties. I just hope that Keamy gets his in the end. Nothing would be better to me than him getting run over by Hurley's Dharma Bus.

What was up with his special secondary mission file on Ben? It somehow contained information on where Ben was and what he was going to do. This really seemed to be a clue that Widmore is using time travel to try and one up Ben. Is it going to work? Also did you notice a Dharma symbol in that file? Was this proof that Widmore was and still is somehow involved with the Dharma Initiative?

The Return of Richard Alpert

Fan favorite Richard Alpert returned last night in Locke's flashback and to no one's surprise he was the same age in the 1950's as he was in the 2000's. Has Alpert discovered the fountain of youth? Or is he just time traveling his way all over the globe? The time travel seems less plausible, but more believable than Alpert somehow not being able to age.

What were those items that "belonged to" Locke all about? Is Locke Alpert's group's Dali Lama? Why was he so upset that Locke picked the knife instead of the Book of Laws? If Locke failed that test, why was he still trying to get him to join his merry band of island dwellers into his teenage years if not more? This episode did prove that Locke was indeed special and that he is now protector of the island.

Notes and Side Thoughts

With Locke being my favorite character, it's hard for me not to like an episode featuring our favorite bald man. With that said, I think it is near impossible to beat his first two episodes from Season 1. Those were perfect, but I loved the "way back" flashback that showed the origins of John Locke. It just went to show that the poor guy has had a tough life. What to make of the whole "hunter or scientist" struggle going on with Locke's fate? It's been relevant to Locke's story from the beginning and I can't wait to see how that is going to play out.

What did you think? What are you thoughts, questions, comments, and/or theories? Let's open up the discussion in the comment section below.