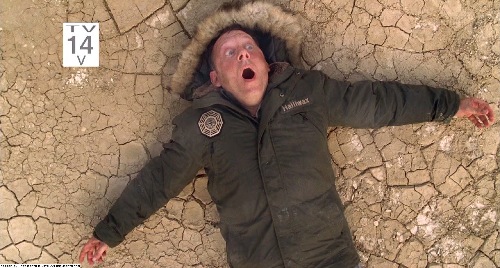 Well, we've had 4 weeks to catch our breath from Season 4's breakneck speed. Last night, the "powers that be" wasted little time to make us breathless again. If "The Shape of Things to Come" is any indication of the rest of the season, the viewers are going to be in for one hell of a ride. Thanks to the WGA strike, the 4th season's final episodes will be even more dense and fast paced. Now, we get even more packed in to each episode, since the writers has to compress their original story path in fewer episodes.

In short, I LOVED this episode. Michael Emerson's Ben Linus has to be one of the most loved and hated characters on television today. The 2008 Elections may be coming, but the sides of "Is Ben Good?" or "Is Ben Evil?" might even bring a hotter debate. After last night's episode, that seems to be the main question that us as fans want and need to answer. Who are the good guys and who are the bad guys? This episode quickly solidified my opinion that our Losties are just people that have stumbled upon a greater story/war. The first season might have been a more primal survival story, but season 4 is shaping up to be an even greater struggle for survival against the armies of Charles Widmore and Benjamin Linus.

Here are some points of interest from last night's episode.

The Key to the Game is Australia?

Locke, Sawyer and Hurley's game of Risk seemed very aptly placed with the introduction of the "game" being played between Ben and Widmore. How much relevance does the game actually have to the show? Is there some significance to Hurley's statement that Australia is the key to the game? My co-host Jack says that in the game of Risk, Australia is the easiest piece of land to defend. This could just be a reference to the island in their board game being pivotal while the island being fought for in Ben/Widmore's game is quite pivotal as well. Of course, knowing Lost, it could have no relevance at all.

Smokey is a Bad Mother... Shut Your Mouth

I assume most people sat with their jaws dropped during the "When Smoke Monsters Attack!" scene. I sure was. This answered a few questions and raised a few more in true Lost fashion. Ben can actually control the smoke monster? Rousseau was right -- it actually is a security system? Exactly what did Ben do in his "Batcave" to summon the smokey beast? And will we finally find out what that damn thing is?

What are Those Rules?

After taking the gamble with Alex's life and losing (R.I.P. Alex), Ben stood in shock and then said, "He changed the rules." What are these rules? Are family members out of bounds? Kids, maybe? Also, why can't Ben kill Charles? He directly said that he couldn't. Is there some sort of time space continuum that could forever be disrupted if Ben kills Widmore at this time? There certainly is a history between Charles and Ben that we haven't touched upon yet. That will hopefully explain these rules in some detail...

Hmm...does it seem weird that a dentist not only knows how to shoot a gun quite well, but also knows Morse code? Bernard definitely seems to have an interesting past. Good for the writers further developing and including Bernie in the show since he is the last of the Talies.

Moving on...Is the doctor is dead? He had a nice cut on his face, in addition to the slit on his throat, indicating that he died and got a cut on his face since the last time we saw him. Is his arrival on the island coming from events happening in the future on the ship? Only time will tell and we'll have to get back to the Freighter storyline for that one.

Easter Eggs and Side Notes
Advertisement

"The Shape of Things to Come" was the perfect episode to get everyone back into the swing of Lost. It wasn't a mind f*ck a la "The Constant." It was an edge-of-your-seat thrill ride, which to me matched the "Pilot's" bombastic grandeur. I, for one, can't wait for the second meeting between Ben, Locke and Jacob, and hopefully we'll find out what that bloody smoke monster is!