House Majority Leader Eric Cantor's startling upset at the hands of college professor Dave Brat, a political novice, has sent shockwaves through the political world, and set off a round of speculation about the causes of the unprecedented result. Few people were more surprised by last night's outcome than the incumbent candidate himself. Cantor's own internal polling had him up by an extremely comfortable 34-point margin. When the final tallies were drawn, Brat bested him by twelve points (56 percent to 44 percent).

There are a number of plausible explanations for why Cantor lost --many of which are not mutually exclusive. Some have speculated that the campaign made a strategic miscalculation in going negative early in the campaign and raising Brat's profile. Others have noted that Cantor had somewhat neglected his district, which had been redrawn since the last election to become more conservative. And then there is immigration, which became a contentious issue during the campaign.

There are few issues over which there is a greater divide between Republicans aligned with the Tea Party and those who are not. Among establishment Republicans who are not affiliated with the Tea Party, a majority (56 percent) favor an immigration policy that would allow immigrants in the U.S. illegally to become citizens provided they meet certain requirements. However, only about one-third (34 percent) of Tea Party Republicans favor this policy. Among Tea Party Republicans 41 percent believe immigrants living in the U.S. illegally should be identified and deported. 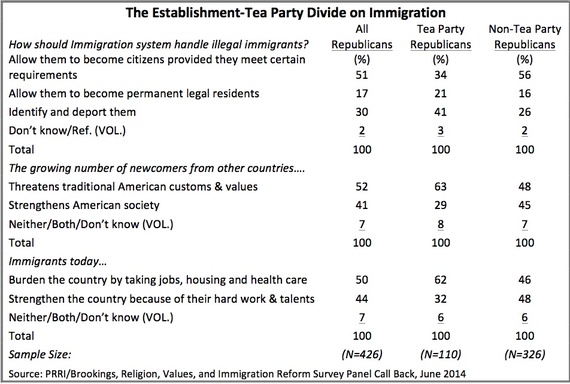 On immigration, there are important differences between the views of Tea Party Republicans and establishment Republicans. However, that does not necessarily mean that the immigration issue directly contributed to Cantor's loss, and its impact on the race remains hotly contested. During the campaign, Brat accused Cantor of favoring amnesty for "illegals" because of the majority leader's previous support of the Dream Act. Cantor, in turn, responded by sending out anti-amnesty campaign mailers. The issue may have mattered because it was one of the few places that Brat could use to effectively paint Cantor as being out of touch with the district. Cantor boasted a 95.07 lifetime rating from the American Conservative Union, and was sufficiently opposed to both Obama and the 2010 health care law, which are among the most animating issues for GOP primary voters. However, on the issue of immigration there was daylight between the candidates, which Brat exploited. In an op-ed for the Richmond Times Dispatch Brat identified immigration as the central policy issue in the race, accusing Cantor of being the "No. 1 cheerleader in Congress for amnesty."

As we ponder the future of immigration reform in the U.S. it is important to remember that it is not fundamentally a controversial policy. Majorities of Democrats (70 percent), independents (61 percent), and Republicans (51 percent) all favor allowing immigrants in the U.S. illegally to become citizens if they meet certain requirements. Comparatively few people support deporting immigrants who are currently living in the country illegally. Moreover, as David Leonhardt of the New York Times notes, "concerns about immigration tend to arise in tough economic times... But the economy is slowly regaining strength." Our recent survey suggests that improving economic conditions have positively affected views of immigrants. In 2013, a majority (56 percent) of the public said that illegal immigrants hurt the economy by driving down wages for American workers. Today fewer than half (46 percent) express this view.

Cantor's loss will certainly have political repercussions, but the public's support for immigration reform is unlikely to change. If anything, demand for reform is likely to increase. By 2016, when candidates vying for president will face a national electorate as opposed to competing for votes in a single southern Virginia congressional district, it is hard to see how they can buck public opinion without paying a political price.