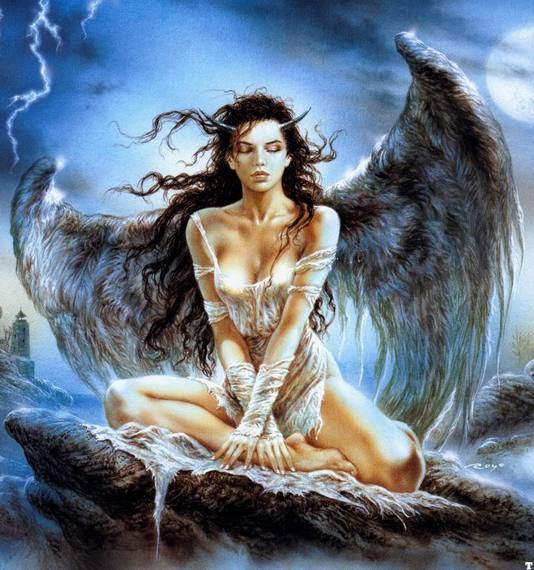 Each of us has a bit of Lilith in us. A bit of a voice, when silence is expected of us. A bit of a desire for freedom from the conventional fences others erect around us. A bit of a need for equality, when we've been taught, as early as when we were children or young girls, that we are not quite equal. Yes, we all possess a bit of Lilith's unacceptable rebelliousness in us, which believe me, requires more than a bit of courage.

My Lilith revealed herself when I immigrated to America and decided to go back to school as a married woman and a mother of young kids, when I became a writer and began creating strong willed female characters with big dreams and the courage to realize these dreams, despite the many obstacles they encountered on their way.

In order to succeed, each and every one of us must have a bit of Lilith in us. Sometimes a bit and sometimes more than just a bit.

My Lilith reared her head up, when I was told I would not survive divorce, that I would be ostracized from my Persian community and that I would lose everything and live in shame poverty for the rest of my life. A man's betrayal is not a big deal, they told me, a man needs more than one woman. That is his right. A wife needs to keep quiet and count her blessings. Go buy yourself designer clothes, fine jewelry, smile, look pretty for your husband. What else do you want?

Well, what I wanted was entirely different. I not only wanted to survive the divorce, but I wanted to write a novel in which I'd express my rage at the inequalities women suffer. I was hoping that the process would make me whole again. And this is when I began writing my latest novel, Scent of Butterflies. I created Soraya, a staunch feminist, who reflects the strength and commitment to equality that Lilith represented.

Yes, yes, I know you're probably rolling your eyes and saying Lilith? She was demon, wasn't she, a dark creature of the night? She took advantage of men in their sleep. She "feasted on the flesh of mothers" and strangled their newborns. Why in the world would anyone want to possess a part of such a monstrous creature?

Wait! Before you go about raising your voices in protest, consider this. Lilith is a mythological figure who has puzzled Talmudic scholars for millenniums. Was she Adam's first wife or a demonic, long-haired seductress, who was in love with her mirror?

One of the ongoing confusions goes back to the two contradictory version of creation in the bible. Genesis One and Genesis Two.

In Genesis One, it appears that Lilith might be Adam's first wife. She is created at the same time Adam is created. She is equal in stature to Adam and she is made of the same substance he is made of. Everything seems fine and dandy until Adam orders Lilith to lie under him, and she, the stubborn woman she is, has the audacity to say: "No, I won't." Here, then, lay the problem the increasingly patriarchal society of the time had to grapple with. What was to be done with Lilith, this rebellious woman, who had the nerve to forget her proper place as a submissive companion to Adam and always, always, a step or two below him.

The solution came to the wise men after a long night of sipping homemade wine, while scratching their heads under their velvet skullcaps. There it was, the answer to their dilemma, right in front of their eyes, in the second Creation in Genesis II. Here Adam is alone again and "The Lord God said, "It is not good for the man to be alone. I will make a helper suitable for him." Note that from the get go, Eve is branded as Adam's "helper" rather than his partner. Anyway, the Lord God goes to work and makes Adam fall into deep sleep and then takes "one of the man's ribs and then closes up the place with flesh. Then the Lord God made a woman from the rib he had taken out of the man ...." And "The man said "This is now bone of my bones and flesh of my flesh: she shall be called "woman," for she was taken out of man." And voila! The wise men had Eve, the subservient woman they were looking for--the woman who would replace Adam's first wife. And what about Lilith? What were they to do with her? Well, she was conveniently demoted to the level of a she demon.

But it is a different day and time now. Why not give Lilith her rightful place in history as the first feminist, who claimed herself equal to Adam and refused to become subservient, who saw Adam's relationship with Eve as an unacceptable betrayal. In short, she demanded to lie next to him and not under him, be his partner, rather than simply his helper. She demanded to be considered a woman in her own right.

Lizzo Captures Her Mom's Sweet Reaction To Her New Music