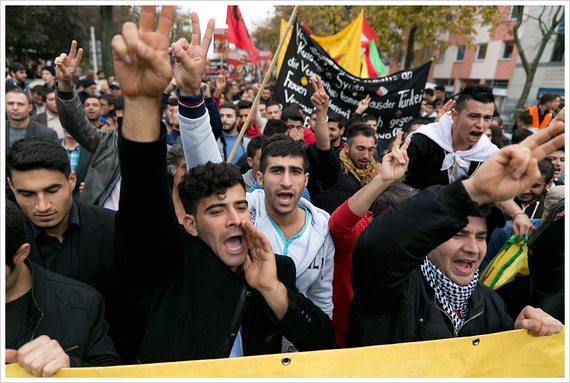 The dark eyes of a young African man met mine the other day for a fleeting moment. Not in person. He was on the news.

Boko Haram's latest malfeasance was being covered, and it seemed sadly normal. What got me about his stare was that he seemed sad, lost, and in shock. It was like he did not want to be there. But even if he was a volunteer, I imagine the reality of killing, maiming and raping doesn't measure up to the come-live-in-paradise advertising.

This International Youth Day, I wish I could talk to all the young people attracted to violent extremism--men and women alike--and find out what they really want. I can't. So I did the next best thing I could.

In partnership with the Center for Strategic and International Studies and the International Youth Foundation, my colleague and I collected every declaration, statement, and call to action that young people have issued at the regional and global levels over the last six years. We also looked at 11 polls of youth from every corner of the globe.

What we found surprised us. Young people certainly value education and economic opportunity as expected. However, today's youth are clear-eyed and unromantic about the regional and national insecurity, as well as corruption and poor governance that are stealing their futures.

There is a startling consensus among people under 30--who make up 50 percent of the earth's population--about the direction we former-youth should be going. In short, young people have four major priorities:

These findings build on the Global Youth Wellbeing Index, released last year by CSIS and IYF, in which youth perception research revealed that despite many obstacles young people still feel that they can contribute and succeed if supported.

This International Youth Day, we would be wise to heed this clear youth consensus. We can partner with and invest in them now, or we can spend far more to deal with our neglect later.

Sharma leads the Youth, Prosperity and Security Initiative, a joint program of the Center for Strategic and International Studies and the International Youth Foundation. She is author of Teach a Woman to Fish: Overcoming Poverty around the Globe.