This second article in my series about the absurdly productive trans-national art star Jan Fabre (the first is here) has very little to do directly with him or his work. Rather, it is about the State Hermitage Museum, one of the wonders of the world. We take a look at it because it is on this field which Fabre agreed to stake a claim. The Hermitage is interesting in itself, but it is also difficult to evaluate Fabre's work in his sprawling solo show "Knight of Despair/Warrior of Beauty" without some sense of the museum in which it is set.

As in real life, there is too much of the Hermitage for it to be adequately covered in any one session. How can I tell you the entire story of the thrones and crimson cloth, the robot peacocks and gold chandeliers, the frescoed arches and dim forgotten halls? I can't, and I saw only the tiniest fraction of it myself. 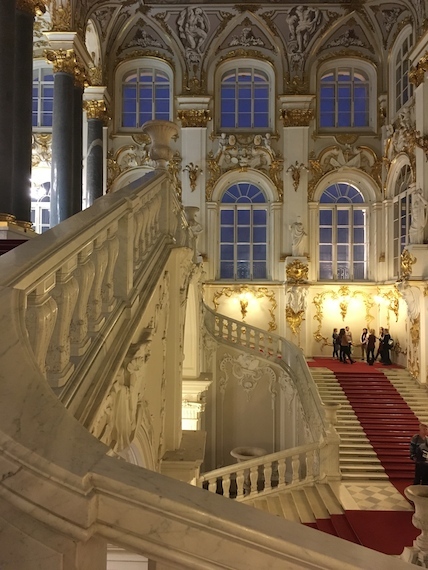 Therefore we narrow our view to a few of the masterpieces in this realm of wonders, and let them stand for the rest. A museum with these alone would be enough. But of course there is endlessly more to the real thing.

The first is Rembrandt's The Return of the Prodigal Son. I have written about this painting before, but now I've seen it for myself. Here is what I had to say previously:

"Consider for a moment the father and son in Rembrandt's The Return of the Prodigal Son. Having returned to his father, the son kneels, clothes tattered, one foot bare where his shoe has fallen apart. He slumps against his father, head shaven and bowed, eyes closed. The father hunches over the son, bowed as well, worn with age and concern, blinded by his emotion. He has returned to the realm of touch: he rests his hands on his son's shoulders, in an all-encompassing gesture of relief, of forgiveness and ingathering. It is impossible to look at this painting without being struck blind, like the father, and awakened to the inner truths it conveys: that we are all going home, that we all need to be forgiven and don't deserve it - and that we are all waiting for those who have left, and that we have already forgiven them for their part in whatever it was that drove us apart." 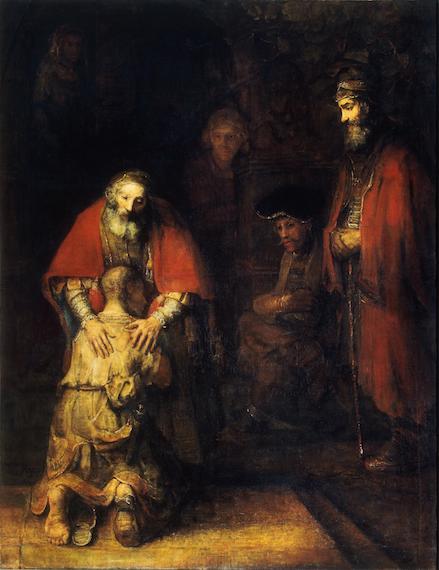 Rembrandt, The Return of the Prodigal Son, 1668

Having seen it for myself, I have only one thing to add: the prodigal son really does look just like my friend Max Ritvo, an accomplished poet who passed away in August at the age of 25. Max's chemotherapy stole his hair, as the prodigal son's hair is lost. Max's face was tall and thin, with a strong jaw, prominent cheekbones, and a sharp nose, like Rembrandt's prodigal son. Like Rembrandt's prodigal son, Max tended to tuck his head into a hug. Like the prodigal son in the Gospel of Luke, Max was wealthy - in talents and gifts: knowledge, humor, wit, eloquence. And like Luke's prodigal son, Max had to abandon all his riches and return, though he would object to the phrasing, to his Father. Max isn't here to object, so I can phrase it as I please. The hands that embrace the prodigal son need not be that Father's in particular. They could be anyone's. They could be mine. These things I thought when I looked at this painting, which is enormous, and also mighty, in person at the Hermitage. 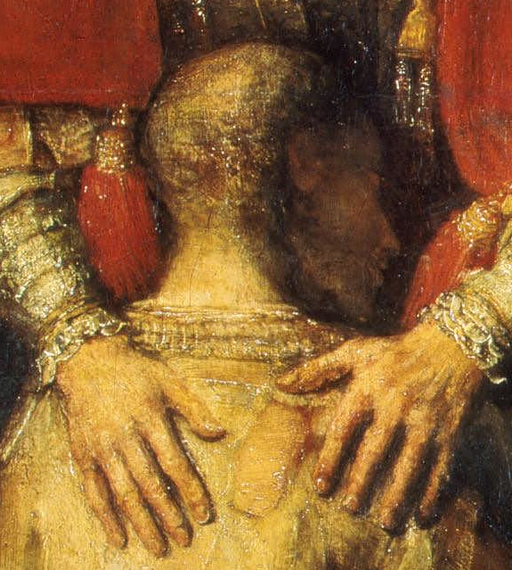 detail, Rembrandt, The Return of the Prodigal Son

Let us turn to another Rembrandt at the Hermitage, Sacrifice of Isaac. Rembrandt evokes the drama of the scene with a painfully vertical composition - Isaac below Abraham below angel. Each figure is connected to the others by the hands - Abraham's left hand covers Isaac's face, and the angel's hand pulls Abraham's right hand, his killing hand, away. The angel's other hand rises up toward heaven, whence his order came. As for Isaac, with his oddly womanish chest, his hands are bound beneath him and invisible. The hands rise from powerlessness toward power in this arcing vertical composition. At the mid-level, from Abraham's killing hand, the knife is falling. The painting catches it mid-air. An instant of time passes in Sacrifice of Isaac, short enough for that knife to appear suspended in empty space. 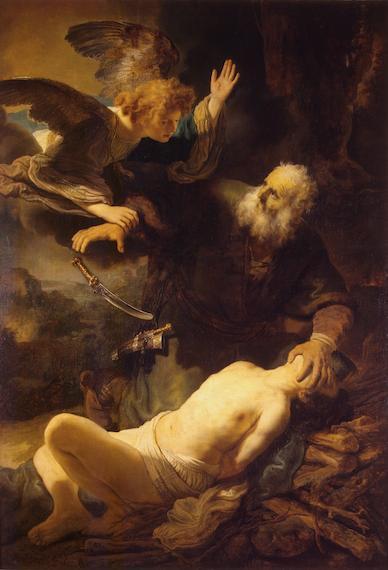 Consider first the psychology of this painting, especially of that hand covering Isaac's face. It has several meanings. First, it is a utilitarian gesture: pushing back the head, as if Isaac were a farm animal, exposes his neck and chest to the blade. Second, it is a gesture of mercy: though Abraham operates under the necessity of God's cruel order, he retains the freedom to spare his son the sight of the descending knife, to impotently attempt to spare him some measure of terror, of hopelessness. And finally, it is a gesture of self-preservation: Abraham cannot bear to look Isaac in the face as he murders him. In hiding his face, he already makes his son into a thing. It is just about possible to apply the blade to a thing, but not to his son, surely not his son. We did the same in gross anatomy: a linen shroud over the face of the cadaver, and these were the bodies of strangers already dead, on whom we worked with our scalpels, but the linen helped, even so.

Above psychology, however, is philosophy. This is a painting of a turning point in the history of civilization and religion: the emergence of a god who rejects human sacrifice. Before the god of Abraham is the savage age of Moloch and Taranis and Huitzilopochtli - not "before" chronologically, but morally before, eons before. Before the god of Abraham, human beings are treated as objects, as instruments of utility. Everything miraculous about them may be demanded as a burnt offering to the god. The god creates, and devours his creation. I believe the Elohim who sends Abraham up that awful Mount Moriah is the same kind of monster as those forgotten older gods. But the Yahweh who sends the angel to stop him is a god horrified at his own command, a god who can learn and has learned. After Moriah, there is a better way. Men begin to worship an asymmetric god, a god who creates but is constrained from destroying. After Isaac, the life of man is an end in itself. It is no longer available as the meal of the divine.

We take this for granted, and have taken it for granted for thousands of years. But all good ideas have a beginning. We do well not to forget. Rembrandt has not forgotten. His mastery of light and dark, of composition and anatomy, allows him to express his deep understanding of psychology. His psychology, in turn, serves to illustrate his insight into the philosophy of god and man. A sufficiently good artwork is not an artwork. It is a truth, and not just any truth, but a truth of the most utter and necessary kind. 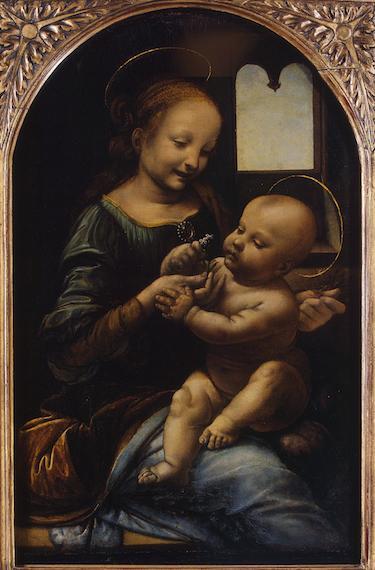 Like so much of da Vinci's work, the superficial beauty of the thing is virtually an obstacle to comprehending its greatness (attribution of the painting is disputed; I don't care; it's great even without the Name). Its parts are harmoniously orchestrated into a pleasing whole, its lights and darks swirl around one another, the faces have the exactly-so grace of da Vinci's sense of features. Zoom for a moment into the flowers the infant Jesus is playing with: 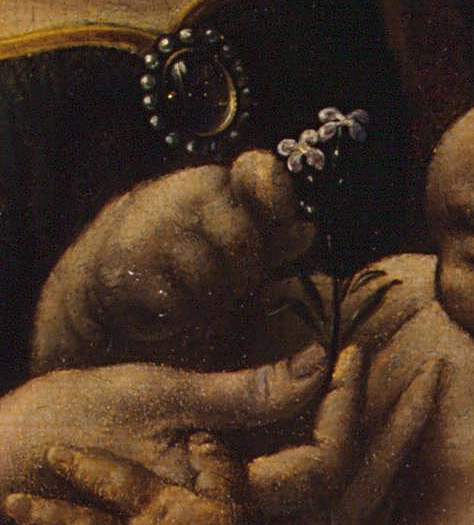 They are cruciform flowers. The scene appears lilting and innocent, but da Vinci prefigures the end at the beginning. This is not particularly what makes the painting so special. It is a common trope in Madonna and child paintings. No, what makes the painting special starts, as with Rembrandt, in psychology, and uses psychology as a springboard to moral philosophy. Zoom back a little bit and consider the scene. 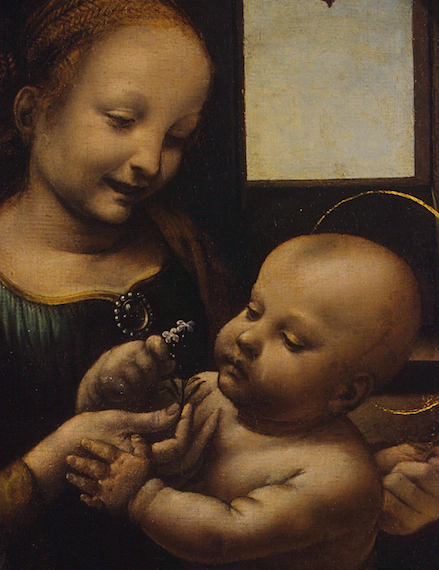 A very young Madonna is laughing as she holds up the sprig of Cruciferae flowers to Jesus. Her gesture is like her expression: she holds the flowers delicately, with humor. Jesus, on the other hand, is all business. He is before the age at which infants first laugh. He is very serious as he seizes hold of her hand with his left hand, and touches the flowers with his right. He inspects the flowers carefully. This is what play is like at its earliest infant stage - intensely curious, unselfconscious, unsmiling. Jesus's solemn concentration is what has made Mary laugh. She laughs because he's funny, and she loves him, and she's happy.

There is absolutely nothing special about this scene. All decent mothers of healthy children have experienced it. Da Vinci minutely observes and records here a thing that happens every single day under every flag in the world. There are many Madonna and child paintings, but very few in which the humanity of Jesus is so adeptly translated into a gesture so common as to be universal, and yet simultaneously miraculous, one of the constant real miracles of life on Earth.

This has a meaning. The great lesson of Abraham and Isaac is that no human life should serve any longer as a mere tool of the god. This lesson was learned long ago, but it still demands Rembrandt to teach it to us again, to help us understand its profundity. The great lesson of Mary and Jesus is that each individual human being is precious. No life is the same as another life. We are not fungible. The loss of any one life is a specific and unique tragedy beyond comprehension. Because Jesus condescends to be human, his death is able to stand for all deaths, and not only for all deaths, but for each death. Each death becomes monumental, as his death is monumental. In approaching him, we are forced into individual dignity. This is one of the paths by which he redeems us.

Da Vinci teaches this lesson, which also needs to go on being taught, by depicting Mary as just some girl, and Jesus as just a little baby, anybody's baby, hers, mine, yours.

Now look, I'm Jewish, and very proudly so. But I am not parochial in my admirations. What we are talking about here are two of the milestones in the moral history of the human race. The majesty of what we conceive of as human has a long history. It took a lot of building. Isaac and Jesus and their grieving parents helped to get us so far as we have come. And alongside the development of moral philosophy, it was necessary for these discoveries, these innovations, to be taught. Rembrandt and da Vinci are two of the great teachers of humankind, and these paintings we have been talking about are pivotal scenes in the moral education of the human race.

They are housed some dozens of yards from one another in the State Hermitage Museum in Saint Petersburg, Russia. They are among the several reasons it is a wonder of the world.

Next time we talk about scientists and magicians, and finally make our way to Jan Fabre.