At long last, we are ready to discuss Jan Fabre himself. Along with the other journalists who went to Saint Petersburg, I was invited to dinner and a chat with Fabre. He ordered pasta and meticulously pre-cut it into such little pieces that he could wolf it down without looking at it or, seemingly, thinking about it or tasting it. Nearing 60, he has frosted blond hair, the face of a hawk, the build of a pugilist, and a tremendous amount of jittery energy. 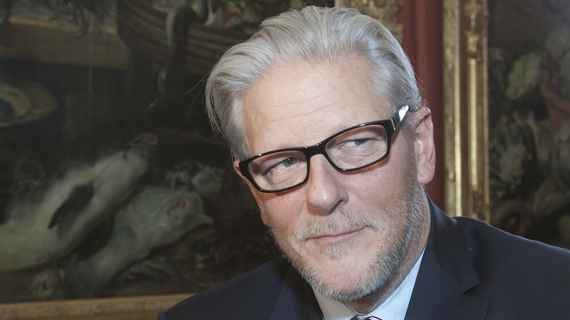 Jan Fabre at the opening of Knight of Despair/Warrior of Beauty, State Hermitage Museum, Saint Petersburg

As an artist with one foot, and sometimes two, in the conceptual mode, it is not always necessary to look at Fabre's work in person or even in reproduction in order to grasp the essentials. His actual artwork often serves merely to instantiate in physical form the important thing about it - the idea. Let me demonstrate. When I spoke with him, he told me about his idea of the horizontal body. The vertical body, in his system, is the one we are familiar with. The horizontal body is a human volume, but filled with undifferentiated blood. As a liquid, it cannot be wounded. A knife passes through it; a bullet passes through it. It heals in the wake of insult. Fabre hopes that we are moving toward the liquid horizontal body: the indestructible human.

When he told me this idea, I asked him if he considered himself an alchemist. Leave aside a moment whether or not we think alchemy is real. The question here means, does Fabre subscribe to the mode of thought of the alchemists? To which he vigorously replied that he does.

Well OK then. This tells us some things we need to know in approaching his work.

Alchemy is a doctrine of transformations. It is a system by means of which one thing is made into another thing. Any number of systems may produce transformations though. The alchemical system has distinctive properties. I think of alchemical thinking as analogical thinking. In his novel Kraken, China Miéville gives an adept (if comically critical) description of this mode of magical thought. His lead character, Billy Harrow, observes a moldy radio which, because of its suggestive decay, can tune in to "some opaque flow of decayed information or other." Thus he discovers the world of magic:

Apparently, Billy thought, he lived now in a trite landscape. Deep enough below the everyday, Billy realised with something between awe and distaste, a thing has power, moronically enough, because it's a bit like something else. Want to hex up briars, what else should you throw behind you but an old comb? All it took was a way with such cute correspondences.

The analogical thinker thinks in terms of similarities between superficially distinct things. The magician is capable of animating these analogies, so that two things become one, and the powers of the one are expressed by the other. This effects the alchemical transformation: A is like B, and thus A becomes B.

Jan Fabre's horizontal man is an alchemical concept. A human-shaped volume filled with a human substance (blood) becomes human, or rather the human becomes this fabrication - and in so doing, assumes its properties of indestructibility.

Let's say that you, the reader, are the kind of level-headed individual who doesn't believe in magic. Of what use is Jan Fabre to you? As a real magician, he is of course no use at all. But consider the territory in which he works. He doesn't work in the real world. He is an artist. He works in a land of make-believe where a thing can be true simply because he asserts it is. In his weightless realm, magic is real. What impact does this reality have outside its hothouse? How does it affect the real world? We will look further at his work and try to answer this question.

I saw some hollow monks that he had fashioned out of chicken-wire robes covered entirely in thin slices of bone. These unsettling figures were still being unpacked, because the show was not entirely installed in October when I visited. 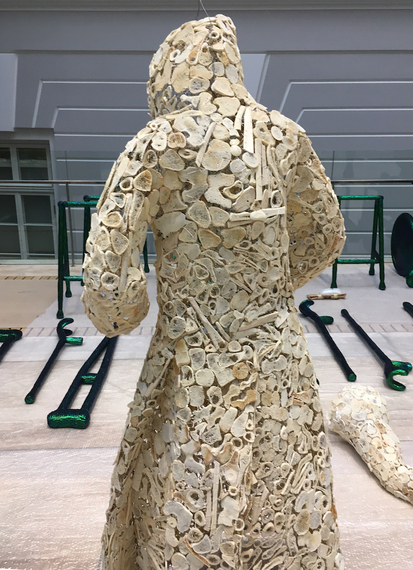 one of the bone-monks before installation

I had to deal with them largely as concepts. Here is some of what Fabre said about these pieces in 2004:

The monk-like figures I have been working on have their origin in my writings about a fluid body, a body consisting exclusively of blood. I have been thinking about what would happen should our internal skeleton be projected outward and become an external skeleton. One consequence would be that we could no longer be wounded... These ideas have led me to the use of human skeletons, which I acquire in India and Leuven and saw into thin slices that can be sewn together. These slivers have the visual characteristics of Bruges lacework, a transparency of sorts.

- from a sculpture.org interview with Michaël Amy

We begin to see what kind of a mind takes to analogical thought. It is associative, playful, given to looking at things backwards or inside-out. Fabre settles on a conceptual framework in advance but once he locates himself inside its universe, his ideas are not doctrinal at all. They are purely inspired. One simply cannot make a leap from the general proposition of an unwoundable body to the specific image of a hollow monk wearing a robe made of bone slices. One can fill in the conceptual linkages afterward, but this is not the same. I think that Fabre's method is to create a zone in which pure inspiration is ultimately just grounded enough to make any sense at all. He is avoiding the sterility of dreams on the one hand, and on the other, the drudgery, for him, of syllogistic thought. 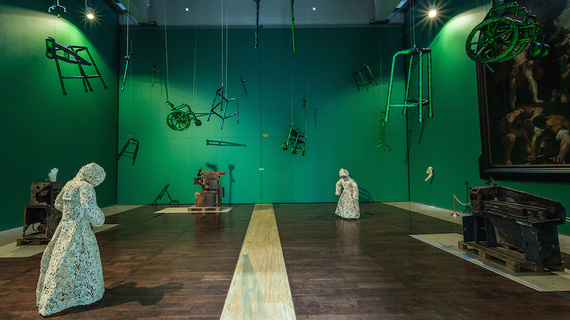 Consider another conceptual artist, Ai Weiwei. He too has a show up right now which I have not seen. No need. It's called Laundromat, at Deitch Projects right here in New York. The concept for this show was that Ai went to an evacuated refugee camp in Greece. He collected clothing that had been left behind, took it back to his studio in Berlin, and thoroughly washed it. Now it is displayed at Deitch in a manner reminiscent of a laundromat. 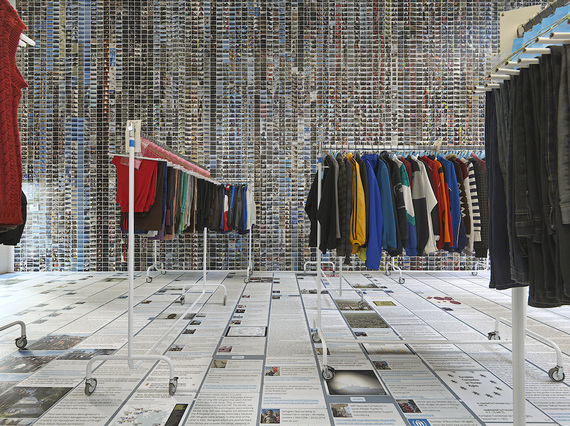 In my experience of Ai's work, this is entirely consistent with his syllogistic outlook. He begins not with an abstract idea, but with a specific concern about a phenomenon in the real world - in this case the refugee crisis. As an artist, he seeks to create an object addressing and expressing his concern, but as a political provocateur aspiring toward virtue, he wishes the object to carry moral weight. Working syllogistically, he soon comes to the heaps of abandoned clothes, not only a real artifact set but a long-time symbol of those who have vanished (see the Holocaust Museum in DC). Continuing to work syllogistically, he turns to his own interaction with these objects. To express his reverence for these missing crowds, his self-abasement in the face of their tremendous suffering, he draws on the strategy of Mary Magdalene, perhaps as filtered through Mother Theresa - the humble act of washing. He washes the clothes, taking away everything that stank, that stained, that stole away color and comfort. His washing yields things that are soft, and warm, and prettily colored, retrieving beauty even from the grey depths.

To say that Ai thinks like a scientist, that his images arise logically from their antecedent themes, is not to say that they are without resonance, without suggestion - without the basic magic of art itself. It is only to say that you can see every step as he walks all the way from here to there. His inspiration takes the form of identifying the essential about things in themselves.

This mode of work, so deeply rooted in reality, is necessary, because reality is so hard to see. Ai's art is an art of returning obscured reality, in all its brutal woe, to the viewer.

Fabre's mode of work, just as necessary, addresses a different phase of the needs of the human soul. His flights of fancy, his freewheeling linkage of images, his synthesis of imaginary philosophies, serves to remind us that the world need not be only as it is. It may still become something new, something alien, something which will terrify and surprise and delight us. 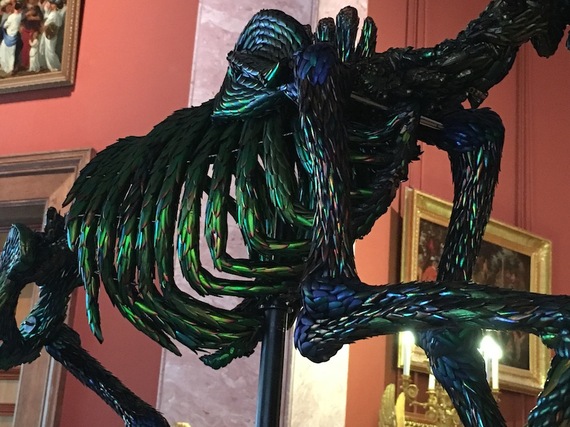 This answers, I hope, that question I asked on your behalf before: if there is no real magic, what good does Fabre do me? How does his fantasy world affect my real one? This is the answer: his work acts to liberate you. Every named thing seeks to shrink toward the center of its territory. If we name ourselves realists, then we will retreat to the center of reality, to the very real, the tediously real. We will burden ourselves with more limits than reality itself imposes. By sending postcards from the land of the impossible, Fabre reminds us of the broad limits of the possible, and shakes the scales from our eyes which hide from us the strangeness of the true.