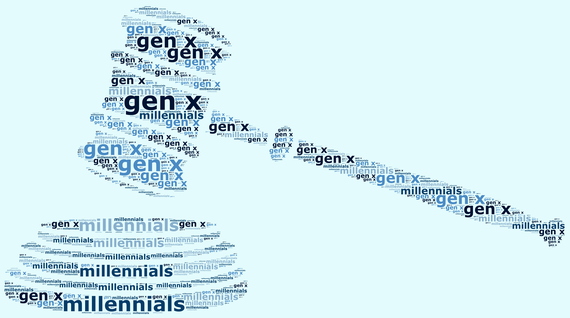 Not a single day goes by without yet another article on Millennials. Sometimes written by Millennials, sometimes for them, the narratives are varied, the topics broad. Accordingly, the voices have been offensive, or defensive, and only lately are we seeing a tone that's increasingly neutral, objective, and reflective.

What began as an explorative foray into their world and sounded like a judgment of their attitudes and decisions has evolved into a more pragmatic understanding of this generation.

It always begins with who they are.

Beyond the halo of confusion that surrounds who constitutes a millennial is the simple arithmetic of a timespan. The 80s and 90s born are a stratifying, almost bipolar mix of the twenty something's with the crushing student loans who sometimes live with their parents juxtaposed to the decade above them, the thirty something's who are generally already parents .

So yes, the paths that they walk are all too familiar -- the student life, the job search, parenthood. It's a similar path that we Gen X trod on, but the journeys are proving to be so different.

Ours was not a generation that carried a huge, insurmountable mantle of student debt in exchange of a university education. As we left college, the job market of the 90s was more sanguine. My job interview for a software engineer comprised of questions about how I accomplished all that I had stated in my resume. Now prospective software engineers are asked to write optimized code or problem solve on the white board. The interviews sometimes last five hours and span multiple days.

And so their journey through adulthood is one of greater rigor and accountability. And if we Gen Xers thought that one day we would pass down the baton to them, we find that the rules of engagement have changed. We are suddenly caught in a circle where our generation is trying hard to be relatable. From learning to swipe left, to hiring managers at $20,000 an hour to help become marketable to Millennials, we are struggling to stay cool and maintain control of the rudder.

Suddenly the seriousness of the new generation is upon is. Much has been made about the selfie generation, their whims, and narcissism. Only now as the dust settles, is it becoming increasingly clear from their voting patterns in recent referendums, that they are indeed mature enough to understand the world that they are taking on and perhaps brave enough to tackle it.

And for a generation that seeks visual gratification from its frontrunners and stars and even of themselves, they still are willing to elect a leader based not on the charisma of his youth or looks but on the strength of his election promises.

We have been quick to deliver judgments midstream during their journey, and their reaction to all this has been more nuanced, their frustration better channeled, their emotions anything but angry. While the anger in GenXers is along financial, ethnic and racial lines, Millennials so far have demonstrated remarkable integration in the ranks.

If anything, given the demographic of voting trends across the world, to me the biggest divide that the Millennials perceive is generational.

Yes, there are gaping differentials between Gen X and Millennials that we can fixate on -- their definition of love which includes vampire bites, their choice and dissemination of music, and the substance and style of their online shopping.

The bigger ones are still in the pipeline -- the cars that they will drive and the homes that they will live in. And who know where this could all lead -- to the building of new-age cities and perhaps to the redrawing of borders?

It used to take a world war and the passage of time for this type of upheaval, which today can be achieved by the strength of a popular online movement. It's not far-fetched to imagine that a couple of young visionaries in the industry might be responsible for the blueprint of big social change.

After all there are people who believe that companies are the new countries.

I think this generation is more elastic and scales better on global issues than we Gen Xers do. What fuels them ideologically might not be a desire to become rich; it could just be that they want to change the world.

They have proven themselves to be risk takers that are not afraid to break away from the mold. That's when we started to take notice of them.

They are leaders and role models who have trail blazed their own path. That's when we started to follow them.

And they are teachers -- who have trained their entire generation to rally around each other and share common goals. That's when we realized that they are formidable.

Let me attempt to wager a definition. The point of maturity is hit when a generation realizes that there is something bigger than them, and that something bigger needs to be fueled to keep the world going.

Gen X is slowly rousing to this idea. My guess is that Millennials already know it.