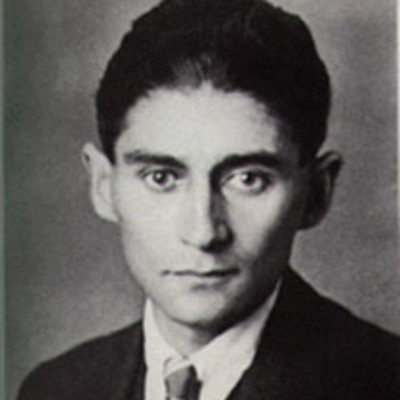 Years ago, recently out of grad school and still cutting my teeth on the inscrutable world of the ivory tower, I was asked to write a review of a newly-published biography of Kafka. I had been tapped, I suppose, because I had also just published a book on Kafka. In the book, I cast Kafka as a "reluctant theologian." The argument went something like this: despite his belief that we construct our gods and their attendant theologies, Kafka reluctantly accepts that we need these constructs (or some of them) as guideposts for ethical action. I cringe when I go back and read the book now--which, from this vantage point now seems to me totally ethereal, insular and irrelevant. Kafka would certainly have hated it, with its too-earnestness and lack of humor.

Still though, as flawed as the book was, it came from a good place. It came from my sincere belief that Kafka has something profound to teach us, and my sense that we ought to listen very closely to what he's saying, because what he's saying has consequences. See, here's the thing: I love Kafka. Love him. I am in awe of his breathtaking originality, of the stark clarity and immensity of his vision, of his artistic courage. He has permanently altered the way I perceive the world, the way I process my reality. Is this proclamation of love overblown? Yep. Is it un-academic? Probably. But it is what it is. I think we need our heroes.

So, anyway, I'm reading this biography... and about 20 pages in, it occurs to me that the language sounds familiar. Turns out that the author had lifted full sections of text from Ernst Pawel's iconic biography of Kafka, The Nightmare of Reason. In all the slew of Kafka biographies, Pawel's is my favorite, masterful in the way it situates Kafka's work in a rich and complex historical, religious, political, geographic and cultural tapestry. When I discovered the lifted passages, I was... how shall I say it? Pissed. Beyond anything rational. In my review, I buried the anger in smug academic tones, exposed the plagiarism gradually, without ever using the term, and ended with this prim pronouncement: "Sadly... the reader is forced to question the originality of each and every claim, an especially laborious and unfortunate task when undertaken in the shadow of Kafka's boundless imagination." Practically oozes self-righteousness, doesn't it? Of this, I'm not proud. But in spirit, I stand by that last line. I couldn't wrap my head around the sad irony of the thing: how could anyone choose plagiarism in the face of Kafka? Kafka? Monument of all things original? Shouldn't Kafka inspire us to new heights of creativity?

I hadn't thought about any of this for years, but it all came flooding back a few weeks ago, when I read Angry Optimist: The Life and Times of Jon Stewart. My husband bought it for me for Christmas, knowing that Jon Stewart sits right next to Kafka in my pantheon of heroes, for exactly the same reasons. Because he's still alive, it seems inappropriate to proclaim my love for Jon as unabashedly as I did for Kafka, but I will confess to sobbing--the all-out, ugly, gulping, snorting kind of sobbing--at the end of his last Daily Show. It was a kind of death for me.

So, to be clear: Angry Optimist is NOT plagiarized. To the contrary, it contains a hefty section of notes and citations. What it is is, well, completely uninspired and uninspiring. And I'm not trying to be mean when I say that. I'm not. I so wanted to love this book, its cover graced by a determined-looking Jon with a close-mouthed wisp of a grin. And I do love the title for its potential to capture the stakes of the game for Jon--the game being truth-telling at all costs. The paradox embedded in that title... that truth-telling, even as it is fueled by the anger of how deeply we have fallen short, is an intensely optimistic calling, bound up in the faith that there are those who want to hear the truth, and in the vision of what we have in us to become... that's a meaty paradox worth exploring.

I tore open the book as soon as I got it, hoping that's where it was headed.

Dejected, I turned to Google, looking for reviews that would confirm my own sense of so much squandered potential. My own, well, sorrow that I had somehow let Jon down by conspiring to read a book that merely scratched the surface of his story, that didn't even attempt to engage the richness and complexity and beauty and humility of his vision. (And, yes, I know how obsessive this sounds.)

The reviews made many of the same points, all of which I agree with: the book reads like a Wikipedia entry; the author relies on secondhand information; the writing is lazy.

But one critique caught me off guard:

"... it's a hagiography masquerading as a biography."

I don't agree that this book is a hagiography (if only it had been... a well-written one). Thrust back as I was into Kafka-world, this line struck me as familiar: Max Brod, Kafka's friend and first biographer, had been accused of turning Kafka into a saint. But... he was also the person who, legend has it, ignored Kafka's request to destroy his work. If Brod had granted that request, would we now be living in a world without Kafka?

I'm wrestling with this: what's so wrong with a hagiography, when the subject truly merits it? The Kafkas and Jon Stewarts of this world are, sadly--or maybe necessarily--few and far between. Not many have the capacity to puncture the veil as they have. Not many have the ability to tell the kind of truth they tell.

Yes, I think we need our heroes. I do.