For the late artist On Kawara, time is everything. His titles state as much. "One Million Years" chronicles every year from 998,031 B.C. to A.D. 1,001,997, written plainly in a seemingly never-ending cascade of numbered pages. Since 1993, the work has been read aloud in public spaces, by volunteers in Paris, New York, London, Amsterdam and beyond. One woman and one man sit at a table, each taking turns reciting one date after the next; odd years for him, evens for her. Half of the numbers are an homage to the past -- dedicated to "all those who have lived and died." The others are a nod to the future -- dedicated ominously to "the last one."

This explains what's happening at the Guggenheim in New York City right now. Walk by the building and you'll hear disembodied voices reciting years both familiar -- one thousand nine hundred and sixty-nine, the year we landed on the moon, and strange -- two hundred and forty-four thousand five hundred and sixty-four, millenia after our existence.

The "One Million Years" performances, taking place until May 3, are part of the "On Kawara -- Silence" exhibition, a posthumous reflection on a Japanese artist obsessed with documenting his every happening. From his "Today" series (monochromatic paintings of dates) to his "I Got Up" postcards to his "I Am Still Alive" telegraphs to his "I Went" maps to his "I Met" recordings to his "I Read" newspaper clippings ... the show is as exhaustive and overwhelming as it is meditative and concise.

After participating in a Sunday performance, HuffPost writer Mallika Rao and editor Katherine Brooks decided to unpack the experience of reading dates without interruption in the atrium of one of New York's most popular art destinations. Here we go:

I AM STILL ALIVE #art

A Twitter version of On Kawara's "I Am Still Alive" telegraph series.

Katherine Brooks: so, to start: what were your expectations going into this?

Mallika Rao: i was a pretty blank slate

for some reason, i thought that the task of saying a progression of years could prove too difficult for me

and i'd embarrass myself in public

but beyond that, few expectations

KB: really? i would never have guessed. your voice is like velvet. it's like you were born to recite hundreds of numbers for an audience at a major art museum

i had very few expectations too.

MR: i definitely did not expect the elaborate mental landscape i wandered through

i thought I would be consumed with not fucking up

but my mind went places 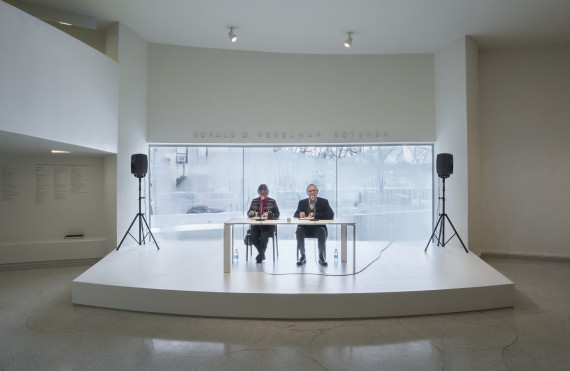 MR: colored by the amazing tidbit that on kawara would listen to these recordings and liked to see pictures of the people reciting

KB: yeah, that definitely gave the recitations more purpose or something? i'm surprised, but i didn't really feel at any point that reading the numbers was pointless

MR: the intro text to the exhibit mentioned how kawara was fascinated by the interplay of meaninglessness and significance

so like, a single person, or day, or year, is kind of insignificant in the big scheme

but is wholly unique too

i started to feel that way about the years

after saying each one, i felt kind of sad. like it was over

KB: when i reached 245,000 i really felt like i was ushering in a new millennium

it's incredible how the meaning remains attached to the number

even though a list of years is so decontextualized

KB: i thought it was interesting that they didn't make it easy for the reader to actually read the numbers

they were squished into columns and bled into each other

and everyone had their own system

KB: what was yours?

MR: at first, i did nothing

we discussed how we were kind of testing ourselves

so i wasn't crossing [any of the dates] out

i would try not to look at the paper, and just say the number that followed from my partner 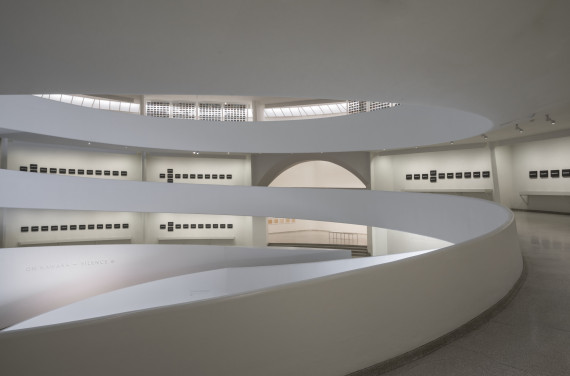 MR: what did you think about the male/female odd/even split?

KB: in a really irrational way, i was so happy to be reading the even numbers

but, i'm not sure i really understood the male/female split

MR: i felt like it was a primal reference

and somehow, evens do seem feminine to me, and odds masculine

i agree, but i think i just loved being the one to start new decades, new centuries

i wonder if he felt like that, that after a while, this kind of obsessive documentation gives you some sense of control

MR: that's great. your priorities are good. i had a thought that maybe only makes sense in my head, but i felt like it correlated to the symbols for genitalia, and more generally, a patriarchal concept of genders -- the phallus is disruptive, in the way that odd numbers are sort of hard to manage, and the yoni is kind of yielding and pliant, like even numbers

KB: that's a really good take. we should ask the men what they think... did you ever think of something besides on kawara, the numbers, the years

did your mind wander away from the performance?

it wandered off kawara

but i was pretty focused on the performance

i thought about the viewers

i just wondered what they were wondering about

KB: i did too! i locked eyes with people and just thought, do you care that i'm doing this? 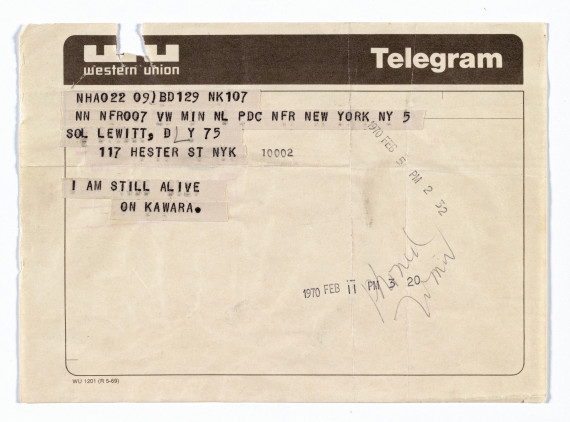 MR: also, i had no sense of how far our voices traveled

you must have had a better sense since you wandered first

KB: i heard your voice when i walked up to the guggenheim

it was playing outside

i heard the previous pair

that will be me!

it made me feel strangely important

KB: i can get behind that

that kind of world view

MR: it was funny

when i was walking around later, and you and cameron were reciting, i only noticed you in moments

i didn't think about you guys much, which was so strange considering that i knew firsthand how intense the experience was for you guys

your voices really did become part of the exhibit 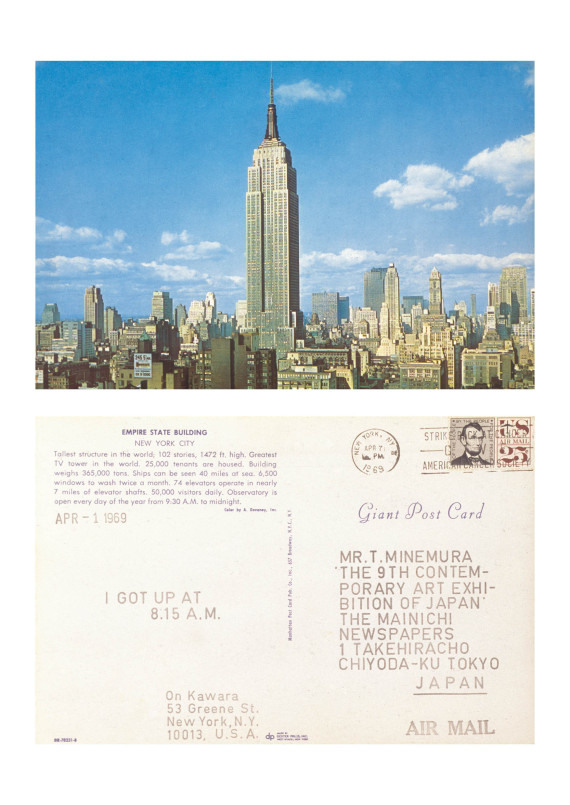 KB: there was just so much to take in visually, the auditory stimulus ended up being atmosphere for me the farther i trekked

what did you think of the actual pieces on view?

MR: i really liked the exhibit

i'd seen the today series before, but seeing it in context with his other work makes it better

KB: the "i am still alive" telegraphs were my favorite

he affirmed his existence in so many different ways

MR: i loved those

it all makes him seem like a funny old man

kind of seeming to play jokes on everyone, but very serious underneath

MR: do you think they put them up on their fridges?

KB: right? were they buddies?

or was this one sided

they were sort of walls for him to bounce off

MR: clearly they were kept carefully

that's an interesting story right there, the collection of all those postcards

i think i am so naturally nostalgic, i think a lot about the past 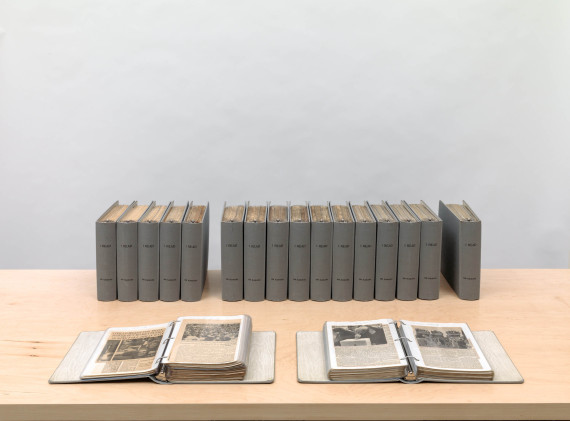 MR: did you have any thoughts about the future?

KB: i did, but mostly, i didn't really think of any living people

i kind of thought we were speaking into a void

MR: it's hard to imagine people that far away

KB: if i had to guess, i'd say no. and even if there were, not people that we would recognize

the subtitles of the pieces are interesting

so maybe he felt like our extinction was kind of inevitable

i think i preferred reading the future dates

we know the past has happened, but we don't know that the future will

KB: how did you feel about the fact that on kawara recently died?

the whole experience just made me want to meet him

and talk to him

and also, i loved the idea of him listening to us

and looking at our picture, and having thoughts about us

KB: did it make you want to document your life?

MR: it's funny, i'm so deep in the konmari method [from The Life-Changing Magic Of Tidying Up] right now

or at least, curating those traces more carefully

KB: what a contrast! 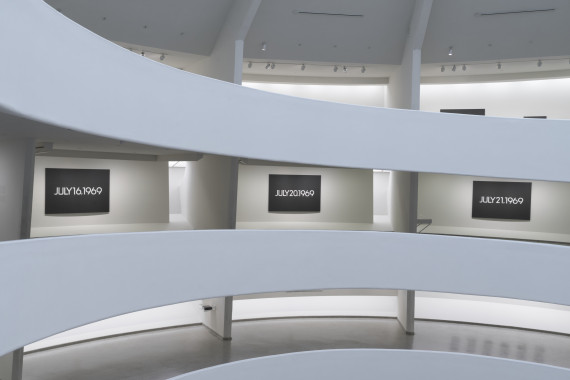 MR: i have been thinking about what i would pass on to my kids

my mom left me so many clothes, not for me exactly, but just because she couldn't bear to get rid of them

but each one feels imprinted with her existence

KB: on kawara's kind of knowledge hoarding is so immaterial

MR: it's interesting, self-documentation as art

at some level self documentation drives most creative work

KB: i guess we're leaving our tweets to posterity...

MR: have you ever tried reading someone's very early tweets?

because of how much information is digital, and could simply disappear

KB: or be locked away

on kawara didn't have to go back and blush at his borecore live journal... date keeping, it's so objective

it's kind of unemotional

which is maybe a drawback

KB: then, at the same time, we all attach different sentiments to different dates

did you look for your birthday?

but that's such a good point

there's a person out there for every date

KB: when i first started thinking about on kawara, i thought he was obsessed with his own self and his place in a world of numbers

like, i acknowledge you, i want to give you that