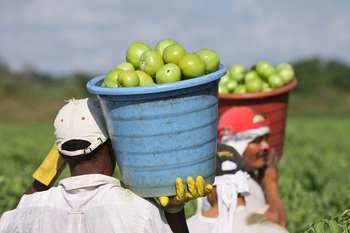 On Labor Day, Americans celebrate the achievements of workers and their contribution to our nation's prosperity. What's often overlooked are the continuing struggles of farm and food system workers, many of whom live below the poverty line, rely on government nutrition assistance programs, and never receive a job promotion.

One-sixth of our nation's workforce, 20 million people, are in the food-production chain. They grow, process, transport, sell, and serve our food. This Labor Day, let's commit to support fair labor conditions for the people who put food on our tables.

The food movement in this country has made significant progress in recent years and attention to food issues has never been higher. Farmers' markets have had an explosive growth, countless schools now have vegetable gardens, and we are paying more attention to the link between our diets and our health.

Yet, most food labor issues still remain under the radar.

Farm work is still the eighth-lowest-paid job in the country, with the typical farm worker earning about $14,000 per year (well under half the typical income of all workers), and many small family farmers also struggle to make a living. And the restaurant industry includes six out of the 10 lowest-paid occupations in the country. The federal minimum wage for workers who receive tips is only $2.13 per hour, and has been frozen at that low rate for the past 20+ years (though many states have a higher minimum wage, only seven have no subminimum wage for tipped workers).

Almost one-third of all food workers experience food insecurity (near hunger) at some time during the year and struggle to feed their families, according to a Food Chain Workers Alliance report. Food workers use food stamps at more than 1.5 times the rate of the rest of the U.S. workforce. About 80 percent of them never receive a promotion, and four out of five don't have paid sick days, even though they handle our food every day.

It doesn't have to be like this. The labor movement has won victories in recent years that can be built upon.

The Coalition of Immokalee Workers (CIW), representing workers on tomato farms in Florida, has won better living and working conditions through its Fair Food Program, a unique partnership that includes farm workers, tomato growers, and buyers. Taco Bell, McDonald's, Burger King, Subway, and other companies agreed, among other conditions, to pay a "penny per pound" premium that growers pass along to workers.

Over 15 years, CIW has also freed over 1,200 farm workers from involuntary servitude, captivity, and forced labor. 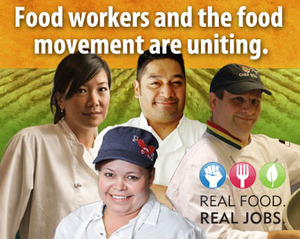 The union UNITE HERE's Real Food Real Jobs Campaign has helped school cafeteria workers in Chicago and New Haven to win a voice in determining the menus for school lunches, in addition to wage increases and better benefits. In Chicago, the members of UNITE HERE Local 1 also got the school district to commit to not open any more schools with kitchens that could only re-heat food, so that cafeteria workers could cook more food from scratch.

A group of socially responsible restaurants is leading a fight for reform in their industry in collaboration with the Restaurant Opportunities Centers United (ROC), a nonprofit that represents restaurant workers seeking better standards of employment. But other restaurants are reluctant to follow their path because of an exaggerated fear of higher costs.

Opponents argue that higher restaurant-workers' wages would result in more expensive meals. But according to the Food Labor Research Center at the University of California at Berkeley, raising the minimum wage for all workers, including restaurant workers, under the proposed Minimum Wage Fairness Act would cost at most an average of 10 cents more per day per household. Lifting each seasonal farm worker above the poverty line would add $15 a year to the average household's food costs.

To promote the idea of just and fair food within the broader food movement, this year national Food Day--October 24--will include a focus on justice for food and farm workers. Every Food Day, people organize thousands of events all around the country to celebrate and enjoy real and just food and to push for improved food policies.

On Labor Day, while we celebrate the accomplishments of workers, and every day when we buy our food or eat out, let's do our part to support the hands that feed us.

Here is how you can participate. 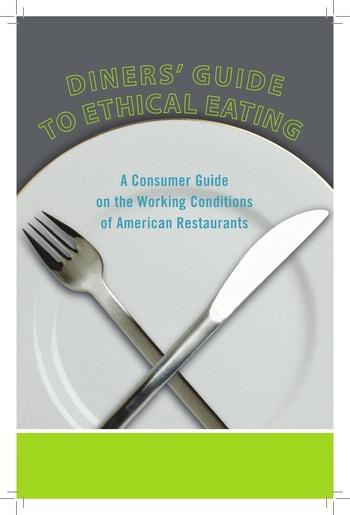 Support responsible restaurant employers by choosing to eat out at one of the restaurants highlighted by ROC's Diners' Guide, and feel as compelled to ask about the working conditions for cooks and servers as you would be asking about where your meat was raised.

With Food Day just around the corner, visit www.foodday.org for resources and ideas for involvement.