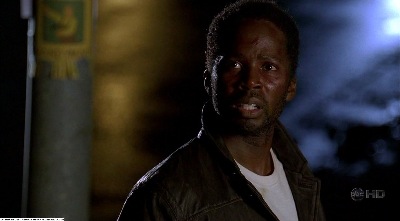 Well Michael is officially back... but what the hell?! Rousseau is dead?! In all of the hoopla over Michaels return and suspected deaths on the island, I, for one, did not expect poor Rousseau and Empire Strikes Back Karl (He looks an awful lot like Luke Skywalker/Mark Hamill) to die. It wasn't as shocking as say when Michael killed Ana Lucia and Libby, but the end to last night's episode, "Meet Kevin Johnson," was a shocker.

Well here we are -- the original eight pre-WGA strike episodes are now over and we have a four week breather to catch up on what just happened. I think this season has been great. It's been fast paced with awesome storytelling all around. What do you think? With only five episodes of season four left, do you like where the story is heading? Even though I am going to be pretty upset if Rousseau is really dead (I mean there are 16-years of back story to her character that we haven't even tapped into yet...), I'm still pretty happy with the season so far. So now that we're at the four week hiatus point, let's give this season a mid-term grade. But first up - some points about this episode:

In last night's episode, we got a similar approach to the last Michael centric episode, "3 Minutes." "Meet Kevin Johnson" essentially caught us up on what's been going on in Michael's world since we last saw him and Walt sailing off into the sunset at the end of Season 2. So what's been going on? A whole lot of depression. Michael has been on the outs with his 10-year-old son Walt after revealing that he killed two innocent women (Ana Lucia and Libby) in order to get them both off the island. All alone with grief over what he did, Michael tried every which way to kill himself until a surprise appearance by Tom reveals the island won't let him kill himself. So Tom, at the bidding of Ben, enlists Michael to be his "Man on the Boat." Of course, after telling his story to Sayid, Sayid quickly turns him into the captain. Was it just me or did the captain not seem surprised? Is there some strange business afoot? All of the suicide attempts in this episode put Michael as one of the top candidates for who's in the coffin. Do you think he is in the coffin?

OK -- as I have said before, I really hope Rousseau isn't dead. There is just too much left with her character for her to be dead. Screenshots show a wound in her upper-right-mid-chest area. Hey, if Locke can survive, she can too, right? Libby's still untold mysterious back story is one thing, but fans have been asking for Rousseau's ever since we first met her. Of course Karl was killed as well, but do we really care? I mean, he did have a nice new haircut and all, but he really wasn't too interesting of a character. And who was shooting at Rousseau, Alex, and Karl? A classic "Who shot who?" TV-cliffhanger back to the "Who Shot JR?" days. Who killed our beloved Rousseau? Was it one of Ben's henchmen or Ben himself? It did seem a little odd when he sent them to the temple in the first place. Or was it the first wave of the Killer Freighties on Frank's "errand running" helicopter? If war is in fact beginning, then we better be prepared to lose some favorite characters.

Since the start of the 3rd season, the producers have said that one of the known "Others" would be revealed to be gay. Ever since Tom said that Kate wasn't his type, most people presumed it was him. Last night's flashback to Tom's penthouse revealed just that. It seemed a little oddly placed, kind of like "Let's make one of our characters gay just for the heck of it" but still it's cool that the show has a perfectly normal (well for an "Other") not over-the-top gay character. He's a normal guy like you or me, going about his life.

Easter Eggs and Side Notes:

• The map that Ben gave to Rousseau and co. to get to the temple looked a lot like Charlotte and Faraday's map to "The Tempest" station. Is the temple near there? Or was Ben just setting them up?

• Who to believe? We have a he said, he said match going on between the Widmore camp and Ben's camp. Just who staged the fake flight? Tom seemed to have all of the info that the captain last week was lacking and since Sayid works for Ben in the future...Ben must be right, right?

• Libby haunts Michael presumably because Michael killed her. It did seem kind of creepy with her message not to blow up the ship. Is this really Libby's ghost or just another one of Jacob's manifestations? Or is Michael's guilty conscience making his mind play tricks on him?

Last night's episode set the beginnings of "The War" between the good guys and the bad guys that we have all been waiting for. First we thought it would be between the Losties and the Others, but now it's the Freighties vs. the Losties/Others. We have all of these conflicting stories telling us who is on the good side - so who do we trust? Who do we root for? If war is in fact coming, I better see a knife-throwing Locke leading the charge Braveheart style. Come on -- you know that would be awesome!

So a mid-term grade for Season 4? I give it an A-. It's excellent so far with its quick pace, crazy time travel, mystery, and finally answers on what is going on with the island and its importance and the purpose of this show. I'm de-meriting it from a full mark because some characters (cough Claire, Kate and even my favorite character Locke cough) have been bugging me. They're either making some dumb decisions (Locke and Kate) or just plain not being relevant anymore (Claire). Granted the writers are doing this for the story, but it bugs me a little. Once this season is over though I'm sure I'll be ready to give an A+.

What mid-term grade do you give Season 4?