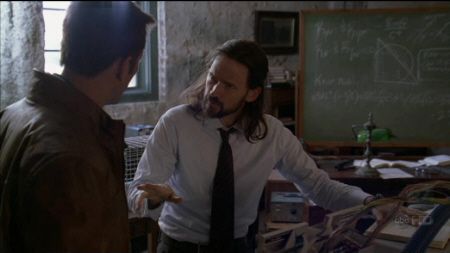 In television, there are funny moments, sad moments and great moments. Then there are those moments where the credits for the episode start to roll and you give out a big "What the HELL?" Last night's episode of Lost not only continued this season's thrilling momentum; it proved to fans that even in its fourth season, it still leaves us with our jaws hanging open.

There was so much going on in this episode, which gave us more of Desmond's already brilliant, headache-inducing story. Add in a whole other leap into physics, time travel and the unknown -- and now we have (more and more becoming one of my favorite characters) Daniel Faraday getting thrown into Desmond's sci-fi/love story odyssey. This was the make of possibly one of my favorite Lost episodes ever.

I currently nominate Desmond David Hume as the most intriguing character on "Lost". Not only does he have the best love story on the show and dare I say on television today (come on, you know you were getting a little misty-eyed at the end...guys, you too), but his back stories provide some of the most thought provoking ideas on the show and a great deal of the mysteries on the island. This episode threw so much at us, so let's take a look at what we have so far.

So now we know that it was Desmond's conscious self that traveled back in time during Season 3. His future visions can be attributed to this as well. The big question now is, "Where is Desmond's mind?" With his conscious being thrown back between 1996 and 2004, which Desmond do we have at the end of this episode? Is he still "Desmond 96" or "Desmond XP"? (I would categorize Desmond's flash-forward self as "Desmond Vista".) Did Desmond still not know who Sayid is at the end of this episode? Or is he back to his good old self (wait -- for the sake of avoiding confusion, let's say "current self.")? As far as his health goes, is he out of the woods? Whatever the answer is, this episode added another excellent dynamic to Desmond's journey back home to Penny.

Penny & Desmond: One Hell of a Love Story

With all of the science, mythology, and mystery surrounding Desmond's journey, his story still manages to have a great and emotional love story at its core. In fact, Desmond's longing to get back to his true love Penny is what roots his story in the real world for us. Without it, all of the time traveling, science and mystery wouldn't matter. But because we care and want to see Desmond and Penny reunited, his farfetched, mind-blowing story works.

Penny is Desmond's constant; this ties in quite nicely to the themes of fate and destiny throughout the show. Will Penny be the rescuer of Desmond and our Losties? Did she really not know about the freighter, even with claims by Minkowski that she has tried to communicate with the boat?

Even if Daniel's circa '96 hair resembled a well-known Canadian rocker's, he is one hell of an interesting character. Are his radiation experiments the cause of his seeming brain/memory degeneration? Was his encounter with Desmond in the past the reason he was crying at the beginning of "Confirmed Dead"? Is his note from the end of the episode reading, "If something goes wrong, Desmond Hume is my constant," a clue stating that his own conscious will travel time soon? I, for one, am glad that he has been paired with Desmond's story and hope that together they can help each other complete their journeys.

Are the symptoms that Desmond and the now deceased Minkowski had the same as the infamous sickness that wreaked havoc on Danielle's crew and is oft mentioned by Dharma and other folk? Did Danielle manage to survive by having her own constant? Alex, maybe?

The auction of the journal from the Black Rock was a nice touch that added to the mythology of the land locked dynamite emporium and to island itself. The item belonged to the Hanso family; Alvar Hanso is the major investor and namesake of the Hanso Foundation. The Hanso Foundation, for anyone who needs a refresher, is the creator of the Dharma Initiative. The Dharma Initiative are the makers of those oh-so-lovely hatches, vans, security fences, wine, peanut butter, fish biscuits, and testers of the mysterious island we all love. Why was Widmore bidding on the journal? Products with his name have shown up on the island - anyone remember Sun's pregnancy test? Widmore has long been theorized as one of the ones "pulling the strings." Was this proof?

In last night's episode, we got pound-for-pound the most information packed into an episode this season. It will definitely warrant many repeat viewings to delve deeper into the information provided in this story. This episode had a great balance of mystery, action, sci-fi, and romance, which made it a wonderment and thrill to watch. We are only through episode 5 and I'm already white knuckled and firmly placed at the edge of my seat.