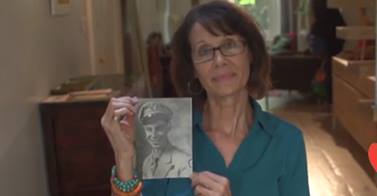 In the beginning, before there were words for my father's story, there were photos. Faded, gray and ivory photos my ill father held in his shaky hands as he was dying, and that I'd found stuffed in a shoebox. "That's old mum," he'd said one afternoon in a quavering voice, pointing to the worn looking grandmother staring out at me. We'd never met.

After my father's death in 1995 these photos, along with the memories they'd sparked in him, laid the trail I traveled back in time through the landscape of his American life. Yet among the trove of photos handed down to me, it was the images of my father's face that became the locus of my memoir. For even as the shoebox photos told the story of his eventful outer life, Joe's face as it changed over time revealed the truer, tragic story of his inner life.

The first photo to emblazon itself on my psyche was the face of my father as a young teen. With his wide eyes and innocent smile, here was the tender, boyish Joe I'd never known. Then there was my father's World War II Army Air Corps photo, which hung on the walls of our home. Inscribed by me with a girlishly proud "Daddy," Joe's eyes sparkle like the stars that guided his earliest flights. His face radiates hope at the life he envisions before him. This photo is now the cover of my memoir, American Icarus: A Memoir of Father and Country -- something my father, humbly born into an Irish, blue collar railroad family, could never have imagined.

Not long after that picture was taken, an airline uniform-clad, newly married Joe Carroll glows in a post-war photo with my radiant Argentine mother. Pregnant with me and glamorous in that fifties way, the two stand giddily posed in front of a DC 4. Not long after, in a photo taken just after my birth, my father beams at his first-born child. Holding me in his arms in proud affection, his face is animated with wonder. This is the "good father" of early childhood I remember, captured in pictures of him smiling in amusement at my three siblings and me playing on the dusty patch of lawn that was our front yard.

Over time, photos of a more macho Joe began to edge out the younger, sweeter man. This was the dominating father who yelled and who made animals and his wife and children tremble before his abusive threats. This was the father who drank, and who drank a lot. As the years passed, unaddressed depression and alcoholism collided in my father, and it showed in his face. The original masterpiece of his boyhood and early manhood slowly became encrusted with the thick pigment of paranoia and mournful despair. Furrows, frowns, jowls, a mean look tinting his Sinatra-blue eyes, and the blotched red stains and veins of alcoholism eventually obliterated his once hope-on-the-horizon, American good looks.

After my father died, I discovered two passports among his papers. One was dated 1975; in his photo he wears a manic grin, and the pages are a blur of stamps that track his travels through the world as a TWA pilot. The other is dated 1985, the year of his retirement. Not even the pretense of a smile graces this passport photo; the handsome young airman is by now completely vanished. The pages in this passport are mostly blank, as are the bleak eyes that stare out at me. I cannot look at this photo for long. My father's haunted look seems to transcend even himself, going beyond personal pain into the transpersonal realm of human suffering.

It is this contrast between the two faces of my father -- one vibrantly alive, the other deadened -- that drives the narrative of American Icarus. What, I wondered, had happened to turn the charming, adventuresome Joe I'd adored as a girl into the despairing alcoholic he became? With each chapter I wrote, I circled his wounded psyche, drawing nearer not only to an understanding of my father's pain, but something of the pain of the human condition. So much of it, it seems, has to do with love: love that begins with our parents and their parents before them and on back; abandoned love; thwarted love; withholding love; violent love; controlling love; love that ends with the lacerated hearts we shield from the world.

One of the last photos of my father was taken just after his diagnosis of terminal cancer. Just three months shy of death, he has gathered his four children together for one last reunion. Standing in the restaurant bar, he wears a crumpled brown and baggy cardigan stretched over his shirt. Beneath the sweater his shoulders are helplessly slumped; his face is gray, haggard, and close to the grave. And yet in important ways, my father's face is different from the dead-eyed stare of his earlier passport photo: old, ill, watery, his eyes are nonetheless alive. Not with hope, but with a nearly unbearable look of wounded hurt.

There is much for me to read in this last photo of my father: the traumas of history and his childhood; divorce and his fall from the emotional highs and professional heights he'd flown all his life; estrangement from my mother, his Carroll siblings and children; and his upbringing in an "up, up and away" culture with little use for the painful parts of life that run counter to the heroic American narrative. Yet if I've learned anything from the depth psychologists I've interviewed, it's that it's in the descent into grief, loss, solitude, memory, and the valleys of our psyche that our souls are forged.

As the Jungian thinker James Hillman wrote, however, it's not so much that we fall -- because, inevitably, we all do -- but how we fall that matters. Hillman calls this "growing down"; psychologist Thomas Moore describes it as the "art of falling," while psychoanalyst Michael Eigen likens it to the image of the Buddha sitting with the anguish of the human condition, or the suffering and resurrection of Jesus on the cross. For psychologist Miriam Greenspan it is a conscious exploration of these "dark emotions" that initiates the young hero into the wisdom of older age.

Only as my father lay dying did he begin to come to ground from his life of flight. His attempt at a deathbed reckoning did not come easy. All the ideas that had once supported him were of little use before the immense forces confronting him. "I wish I'd spent more time learning some of the things you have," he said one night. His vulnerability, so unexpected, made me cry. Still, I like to think that as Joe left this life for the next, it counted for something that he took the courage he'd once possessed as a young pilot and began tentatively to explore the boundaries of his soul.

Portions of this are adapted from my forthcoming memoir American Icarus: A Memoir of Father and Country. To pre-order a copy, visit my Lantern Books indiegogo book campaign, American Icarus and America on the Couch, where you can view Snapdragon Films' book video to see more photos from my father's American life.

Pythia Peay is a journalist and author on the American psyche.