Every year, LaGrange College brings in a Martin Luther King Jr. speaker. This year, the speaker was the Rev. Dr. Raphael G. Warnock of Atlanta's Ebenezer Baptist Church, who spoke to a packed Callaway Auditorium. And yes, politics entered into his speech. But, unlike what most people probably expected, it wasn't a partisan speech. This column will tell you why.

Rev. Warnock, who served Ebenezer Baptist Church since 2005, was the youngest to serve that historic church regarded as Dr. Martin Luther King Jr.'s "spiritual home." He spoke about how he enjoyed connecting with institutions of higher learning, exhorting them to tune the heart, not just train the head, promoting ethics in education. 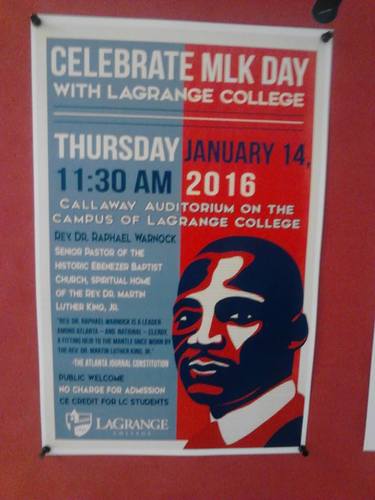 He called for people to dream. "Dreams are an affront to the status quote," Rev. Warnock preached. "Hold fast to dreams, or they die." He himself had a dream, the son of a West Savannah preacher who ran a junkyard, to attend college. "My father used to say 'there is a God who can recycle,'" Rev. Warnock told us.

But he also connected the holiday to today's politics. There was a discussion about what happened to Trayvon Martin, killed for walking through a gated community with a bag of Skittles. He was shot by someone, whom I might personally add, who has done little to show that he was anything but the aggressor that night, and someone who even Gov. Jeb Bush pointed out, engaged in behavior beyond "Stand Your Ground" laws.

He decried today's racism, income inequality, and today's partisan politics. "When geese fly in a 'V' formation, one side of the formation doesn't try to shut down the other half of the formation," Rev. Warnock pointed out.

But then, audience members were in for a surprise. Because Rev. Warnock was about to talk about alliances he formed with the ACLU, Newt Gingrich at the Koch Brothers. Really?

The connection they formed involved criminal justice reform, especially from the bottom-up. You see, it's not just the Bernie Sanders fans who are concerned about how many people are being locked up.

Conservatives realize too that some of the regulations that lead to America dominating the world in prisoners is pretty expensive. It's a drain on public resources, the economy, and locks up families where the primary breadwinner is behind bars. For violent crimes, such cases are understandable, but for non-violent offenses or technicalities, or cases where service would better fit the punishment, such avenues should at least be explored.

This isn't some new push by conservatives fishing for 2016 votes. Newt Gingrich aligned himself with Washington DC Mayor Marion Barry when Barry made his comeback (and not his ill-fated first stint in office). And the Koch Brothers, as well as Rand Paul, have sought law enforcement reforms for several years now. Georgia Governor Nathan Deal has supported drug courts which emphasize treatment and rehabilitation, with punishment only for non-compliance.

I know that going into a partisan election, such unity calls don't get the same level of attention. But maybe they should. After all, most Americans are usually more moderate than their politicians, and less likely to oppose everything a politician from a different party says, just because they wear a different color or have a different political label. It's what Dr. King would have wanted.