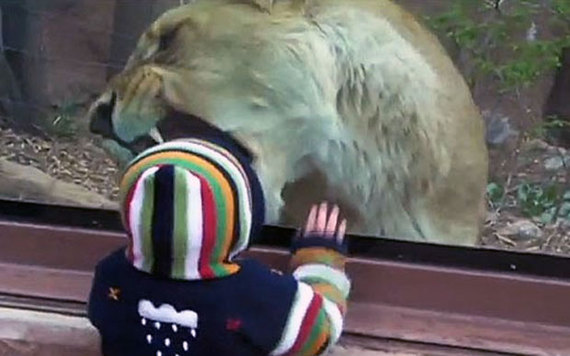 "My girlfriend has wanted me to get into therapy for a while," Jesse, a bright and quick 25 year old told me. "She sent me an email telling me why she thought I needed to go." He shook his head in what looked like sadness and disdain.
"You say anything back?"I asked
"Yeah," said Jesse. "I sent her a video."
"A video?"
"It was a YouTube video of a baby behind a pane of glass, and on the other side of the glass is a mountain lion, clawing and growling at the baby."

I loved it, both the image and how Jesse responded. I let him know.
"I have a question," stated Jesse, not seeming to care about the admiration of his video. "What's the methodology here?"
"You mean like how does this work?" I asked.
"No. More like how does this help?" rephrased Jesse, with the healthy skepticism of someone doubting a juice cleanse. I understood his uncertainty, and his question was more than fair. In the past three years, Jesse had lost two friends to overdoses, and a third to suicide. These deaths opened up a window into Jesse's own depression that now scared the crap out of him. How was talking to some guy going to make anything better, let alone change what had already been done?

"Therapy won't undo any of this," Jesse explained to me.
"You're preaching to the choir, Jesse. None of what we do here will change any of it or bring anyone back. But I do really like that video."
"Yeah I get it. Like I'm the baby, and the mountain lion is my depression."
"No no no," I interrupted.
"Okay, so what? I'm the mountain lion, and I need to get in touch with my little baby-"
"Oh jeez no. That sounds awful. Who wants to do that?"

Jesse stopped, rubbing the bottom of his sneaker against the carpet.
"So then what is it? Why do you like the video so much?"
"Because it's me," I told Jesse. "The mountain lion is me."

How was talking to some guy going to make anything better, let alone change what had already been done?

At the beginning of this past spring, as my wife and I got ready to welcome our first child, I began letting patients know that I would be taking time off for paternity leave. As much as I believed in my decision to take this time off, I had concerns about being away from my patients for an extended period. Though, it turns out, I believed in my patients more than myself.

I had no doubt that, as difficult as our time off could be, the people I see every week would be okay. It wasn't their strength in my absence that I was preoccupied with, it was mine. Would patients return once I was back? Was our bond strong enough? Perhaps my absence would lead to them realizing that they were fine without the work we were doing. Or maybe my time off was breaking some unwritten rule that would push them away. Like a restaurant that's closed, when we peer through its window, we don't stand around waiting for it to open. We walk down the street looking for another place to eat. What I was met with instead blew me away.

​Many patients were, in fact, concerned about what it would be like to go over a month without seeing me. What were they going to do without this rudder that they had learned to depend on? Some showed tears, some showed anger, and some joked, "Josh, you really haven't considered me and what I want in any of this have you?" But the one resounding reaction was one I never even considered; genuine happiness and caring for me, and my wife, that we were about to have our first child. Session after session, each patient let me know that, though a break in our work would be difficult, they understood and believed in the time I was taking. This understanding and expression of our connection moved me deeply.

It wasn't my patients strength in my absence that I was preoccupied with, it was mine.

I believe we are born biologically needing to connect. That connection is the source, the life's blood of all that is meaningful in our lives. One of the ways in which we can run into trouble is when we begin to worship autonomy and we try to downplay or even feel ashamed about those relationships that we need. I was overwhelmed by how many patients let me know, completely without shame, how much our relationship is an essential part of their living. To all of them, I say thank you for the great gift that they gave to me.

Through their openness and ultimately their vulnerability, each time a patient expressed the importance of our relationship, I became aware of the same. I saw that I need them just as much as they need me, and I am indebted for this awareness. We worry too much about being needy. I am grateful for the relationships that I need. To not need them would be to live a cutoff, safe, unrealized, unfulfilled life.

I believe we are born biologically needing to connect.

"You're the mountain lion?" mocked Jesse. "No way."
"Yes way," I said back.
"I sent that video before I even met you."
"Doesn't matter. I am. We're not here to bring anyone back. We're here because being alone in the type of pain you are in is excruciating. But feeling understood, connected to something in that pain is an entirely different universe. It can be curative actually. The problem is that the cure is in the connection between you and me, and connection is something that has caused you more pain, not less lately. Connection has become painful, scary, violent... a mountain lion. It's an awful thing when we become allergic to the medicine, and right now you're allergic. To me, to everyone.
"So everyone's the mountain lion. Not just you."
"Yup. Dig that video."

To Jesse's credit, a cogent argument was grounds for consideration, and so after that session through nerves, anxiety, doubt and sadness, he and I fought every week to find connection through understanding and understanding through connection.

Years later Jesse has now found medicine in connection instead of a looming predator. As a result, it is his kind words, expressing the father he believed I would be, that I think of as I try to finish this piece before my son wakes up in the other room. Thank you to all those who expressed that similar sentiment as Jesse. You have made my time off all the more meaningful.
The stuff we seek is out there. For many, it is sitting right across from us. Are we courageous enough, to be vulnerable enough, to get it?