"What does that mean?"

"You would have to have been born an Arab to understand," he answered. "But in your language it would be something like, 'It is written.'"

On the 17th of July 1791, at the height of the French Revolution, the country's National Assembly decreed that Louis XVI would remain king of France under a constitutional monarchy. Overtaxed, underpaid, and disillusioned by their divinely ordained administration, the people were furious. They demanded the king's abdication, the dissolution of the monarchy, and the creation of a republican state. A petition was drafted, a crowd gathered in the Champ de Mars to sign it ... and the National Guard fired on its own people. 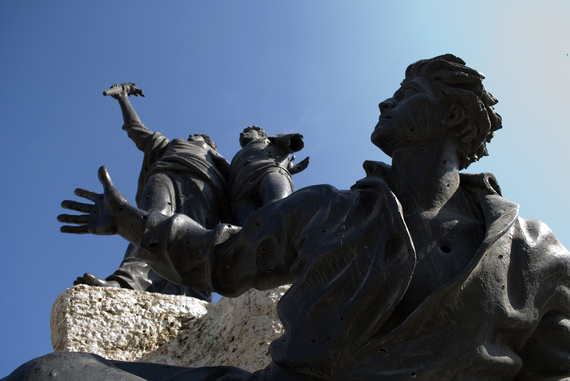 "On a tiré sur le people!" The massacre sealed the king's fate. The wheels were set in motion; it was the beginning of the end.

"Determinism is the philosophical view that, given certain initial conditions, everything that ensues is bound to happen as it does and in no other possible way." Maktub.

If a government fires on its people, the people will revolt. Maktub.

On the 22nd of August 2015, the Lebanese government fired on its people. Protesters had gathered in Beirut's apparently purpose-built Martyrs' Square to demand the resignation of an inefficient caretaker government, whose administration has been marked by political infighting, a fifteen-month system-wide electoral gridlock, corruption, a crumbling infrastructure, daily power cuts, water shortages, one of the slowest internet speeds in the world... and tens of thousands of tons of garbage lying uncollected in the streets.

Gibran Khalil Gibran wrote "Pity the Nation" as far back as 1934, a poem about a country in decline. A self-fulfilling prophecy, that over years of demonstrations and insurrections, civil wars and invasions, roadblocks and car bombs, inflation and corruption, Lebanon came to accept. We were never meant to live in peace. We never had a choice, we never had a chance. It just was not maktub.

Or so we thought.

Pity the nation that raises not its voice
save when it walks in a funeral,
boasts not except among its ruins,
and will rebel not save when its neck is laid
between the sword and the block.

It took laying the nation's neck between mounds of garbage.

Pity the nation whose statesman is a fox,
whose philosopher is a juggler,
and whose art is the art of patching and mimicking.

It took running out of patches, a president, and landfill space.

Pity the nation whose sages are dumb with years
and whose strongmen are yet in the cradle.

But all we ever had were strongmen. The sages never had a chance.

Pity the nation divided into fragments,
each fragment deeming itself a nation.

It took a government firing at its own people, for its people to realize that Christian or Muslim, Sunni or Shia, "we were all in the gutter."

For the first time in a long time, I do not pity my nation.

I pity the nation that mistakes determinism for fatalism. That uses maktub as an excuse for apathy. That accepts the gutter, the stench, the power cuts, the roadblocks, the corruption, the slow internet, as all it deserves. That is all it will get.

Irish political philosopher Edmund Burke has been attributed with the saying: "All that is necessary for the triumph of evil is that good men do nothing." There are two versions of our history that future generations may study. One in which a nation was buried in its own filth. And another, in which a government fired on its own people, and that sparked a revolution.

My nation's actions are not fated. Its future is not mystically pre-ordained. "We are all in the gutter, but some of us are looking at the stars." Our future is maktub, but whatever version unfolds, it is we who must write it.

- Tom Fletcher, former British Ambassador to Lebanon, in a farewell letter written on the 31st of July, 2015

If a government fires on its people, the people will revolt. It is time. Finally.