Last Wednesday night my wife and I threw away the hottest tickets to America's favorite new blood sport, the Presidential debates. We turned off our TVs and went out to dinner with a friend who was in town taking part in the Global Empowerment Summit at the local university. For the entire evening, no one talked about the dreadful state of our polarized politics. Instead we spoke of simple pleasures. We laughed. We turned our attention to the summit and the speakers who will be addressing global issues on economic empowerment, social justice, and women's rights.

The next morning, while reflecting back on our conversation I realized that what has been lost in this ugly, bloodthirsty quagmire is the issue of women empowerment. While many parts of the world have had the opportunity to experience women in leadership positions, no women in the US has risen to power to lead the free world. The closest America will come to this reality will be on November 8th. As I further pondered the reasons on why has this single important issue been lost in this debate, it occurred to me that we live in a man's world.

Embedded in the historical subconscious of our species is the image of the evil women. According to Greek mythology, Pandora, the first woman to be created, introduced trouble to the lives of men. As she opened the box containing all the evils of the world, she allowed them all to escape. This act earned women the designation of troublemakers. This myth was further reinforced in the recesses of our minds by the man-led Abrahamic religions and the single story of how Eve's so called original sin had forever sentenced us to death and suffering. Redemption fell squarely on the shoulders of men.

Michelangelo's painting of the sin of Adam and Eve from the Sistine Chapel ceiling. Photo credit https://www.wikiwand.com/en/Original_sin

It must have been noble men who fought wars against other noble men to deliver us from the evil of women. The destruction of our planet was our destiny because Eve's original sin condemned man to a genocidal destiny. If there's a new biblical narrative to sum up our brief history on this planet, it will be something like this: The egocentric bloodthirsty male plundered and killed and he saw that it was good. Then came the men of the high priesthood, who ordered society according to the vision of man and they saw that it was good. Then came the men of science who interpreted all life on earth in linear logical data, and man saw that it was good. Then came the waning. All the good that man has done has put us on par with the Gods of destruction and on to a path that has placed us squarely on the cusp of the sixth mass extinction. Man should be so proud of this monumental accomplishment since all five previous mass extinction events were, in biblical terms known as acts of God.

As man waits for all of humanity to be sucked into the vortex of destruction, has he thought of handing the wheel over to the other half of humanity? Would the rising power of women leaders around the world save us from ourselves? Would some one like Hillary Clinton be the catalyst that changes our destructive path? And if so, why is she being demonized by so many?

I put that question to our friend Jean Houston, the founder of the Human Potential Movement. Dr. Houston recalled a conversation she had with her anthropologist friend Margaret Mead before she died. It gives us a glimpse on to why the Hillary Clinton archetype is loathed by so many. Mead told Dr. Houston "One of the stupid things that is happening today is that women are modeling themselves along male lines in order to get ahead. They are becoming second-rate men and they are going to stay in second-rate jobs this way." Mead went on to explain, "You'll see. Soon women will be both the priests and the presidents. Why? Because women's resourcefulness and resolve increases as circumstances become more difficult." 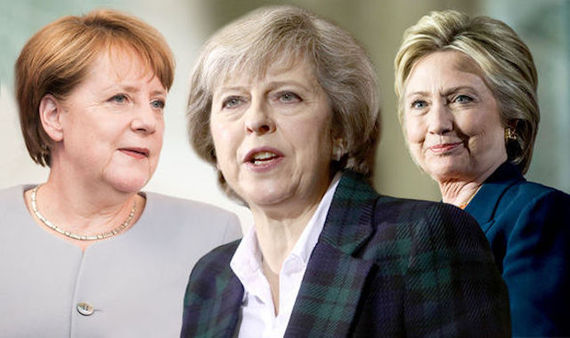 photo credit EMTV Online http://www.emtv.com.pg/tag/women-empowerment/
The circumstances for the survival of our species have never been more difficult. Would the man made sixth extinction be reversed or should we quietly accept our destiny on the hands of men? On November 8th I will give the other half of humanity the chance to begin to fix man's shortcomings and restore our existential balance. On November 8th I will honor my mother. I will honor my wife. I will honor my two daughters. I will honor the essence of a new phase of global leadership that will shatter the glass ceiling so our granddaughters can live in a world where the masculine and the feminine can finally come to balance. I do that with a full understanding that the first women president in the US has been shaped by a brutal system dominated by men.