Ryan "Hurleigh" Burley, a few dollops of mustache sweat gleaming beneath his floppy, 1860s Philadelphia Athletic cap, paused before arcing his next underhand pitch to the formidable Harrisburg Keystone striker. The soft, hard-shell sized vintage baseball made a loud WHUMP sound and soared into the blustery Philadelphia sky. Two hairy-faced Athletic outfielders converged, gloveless, produced some momentary confusion, and the ball plopped in the grass between them. "Gotta talk, gentlemen!" yelled full-bearded Captain Mouth in left field, but the Athletic nine never collapsed, staged another rally of line stingers and stolen sacks, and defeated the Keystones in the first game of their Saturday doubleheader. 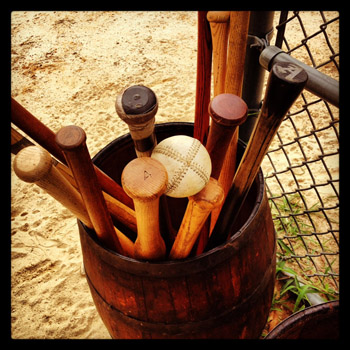 Three blocks south of Marconi Plaza Park, up in the modern world, the Phillies were about to host the Braves in front of over 41,000 people. The two dozen or so local folks who showed up to watch Mid-Atlantic Vintage Base Ball league action may not have been able to buy a Stella draft and Tony Luke's pork sandwich and watch Chase Utley, but they sure didn't seem to be any less entertained by the Athletic men also known as Freight Train, Southwark, Lighthouse, Loveseat, Clothesline, Ironsides, Fishpants, Sticky, Laddie, Victory and Nursemaid.

Members of the MAVBBL, with over 20 teams from Providence, RI to Virginia, spend the entire summer and much of the fall traveling to scattered venues to perform in their vintage, heavy wool uniforms. They are a fiercely dedicated group, striving to keep the traditions of pure, original baseball alive.

But they weren't the only ones doing that in Philadelphia last weekend.

Across town at the Marriott Plaza, the 43rd annual SABR convention was well into its fourth day. Formed in 1971 and now sporting well over 6,000 members, the Society for American Baseball Research has become a quietly influential institution, its passion for the game's history and detail perfectly mirroring the lighthearted physical struggles of the vintage ballers down the road.

What? You say journeyman Philadelphia outfielder Elmer Valo was rumored to have been one of the few men to play in four straight decades? Well there's Connie Mack biographer Norman Macht to set the record straight in a 25-minute presentation. George Skornickel documented the sad history of Baker Bowl, right before Doug Skipper did the same for Shibe Park in the very same room. A panel of three ex-Phillies--Dickie Noles, Gary "Sarge" Matthews, and 2008 World Series hero Brad Lidge--entertained a vast gathering for 90 minutes, detailing their exploits and taking questions. (Noles' story of hitting George Brett in the 1980 Series after threatening to hit two other Royals was endless and hilarious.) ESPN's Jayson Stark and MLN Network's Brian Kenney appeared on a media panel. There was also a panel on Women in Baseball, one on new research into the 1919 Black Sox scandal that featured Buck Weaver's 86-year-old niece, one on Philadelphia baseball history, and my favorite one "Imagining Baseball", which featured ESPN writer Steve Wulf, author Eric Rolfe Greenberg, board game expert Mark Cooper and MLB official historian and author John Thorn. In an hour that seemed far too short, they discussed how baseball is played "between the ears" by creative writers and collectors who can never get enough.

There were also the usual extra-curricular activities, like a group outing to a Phillies game, ballpark tour of historic local ballpark sites, research meetings, trivia contest and non-stop socializing between SABRites old and new. This was my third straight convention after Long Beach and Minneapolis, and I purposely did a lot less hobnobbing to focus more on the presentations and local attractions. Great museums and restaurants were everywhere in Center City, and aside from a day of warm, spitting rain, the weather cooperated.

Still, while many of the Philadelphia-themed talks were enjoyable, not all were engaging, crisply presented, or seemed that worthy of inclusion. Some of the talks and panels were additionally bogged down by members commandeering the audience mic to drone on with their personal stories. These things pointed to a broader issue I've thought about for three years now: What kind of image does SABR want to project in the wide world of baseball? How can they make themselves more alluring to the average passionate baseball fan who still values less important statistics like pitcher wins and batting average? Do they even want to? On the same day, USA Today's Dan Schlossberg highlighted SABR's extensive historical research in a rich, accurate piece while a local NPR Web site sloppily referred to them as a gathering of "Stat Geeks."

If anything, SABR caters to both elderly fans AND younger statheads, but there's obvious room for improvement in both camps. The presentations could be a bit snappier, the vendor room of book and memorabilia sellers a lot more populated, and with advanced stats now a permanent part of most baseball broadcasts and Web sites, there's no reason for these yearly meetings not to be even larger. Judging from the sex and age of most of the conventioneers I saw, though, SABR wisely has one of its eyes trained on the future. They didn't include the Women's Panel and an "Under-30 Mixer" in the Marriott hotel bar for nothing.

Still, baseball is a game that is so large in its lore and fanatical in its facts, and SABR gatherings never stop reminding me of this. On Saturday, while the convention's final panel discussed the "evolution of statistical analysis, from the early days to the use of contemporary analytics, which draw on the recent proliferation of data and advances in technology", little did the panelists or panel audience know that a few miles away, those twenty Athletic and Keystone players were drinking water, toweling off their sweaty mutton chops, and re-greeting the "arbiter"--garbed in his top hat, vest and cane behind home plate--before grabbing their willows to begin the second match.

Jeff Polman writes fictionalized baseball replay blogs. His current endeavor is set in 1938 and called Dear Hank. His first such blog, "1924 and You Are There!" has been published by Grassy Gutter Press and is available on Amazon.