In spite of the fact that we depend on scientific discoveries in every single aspect of modern life, from the way we build, maintain and heat our homes, to the cars we drive, airplanes (and drones) we fly, phones, TVs, computers, refrigerators and washing machines we use, etc., science does not always get positive "reviews" in cultural circles. I have collected a few quotes from the last two centuries that are related to science -- statements made by educated individuals.

Here is one from English educator and historian Thomas Arnold (1795-1842): "Rather than have Physical Science the principal thing in my son's mind, I would rather have him think that the Sun went round the Earth, and the Stars were merely spangles set in a bright blue firmament." Poet W. H. Auden (1907-1973), who actually had an appreciation of science, still "explained" why poetry could not celebrate scientists (a topic, by the way, that used to bother the famous physicist Richard Feynman a lot): "The true men of action in our time, those who transform the world, are not the politicians and statesmen, but the scientists. Unfortunately, poetry cannot celebrate them, because their deeds are connected with things, not persons and are, therefore, speechless." The worst comment was probably made by medical doctor and TV presenter Robert Winston (1940-), who in 2001 said: "Science is 90% boredom."

The chemist and novelist C. P. Snow (1905-1980) already lamented the enormous gulf that has opened between scientists and what he called "literary intellectuals," in his famous lecture "The Two Cultures." Here is one of his descriptions of a typical event that exemplifies the problem:

A good many times I have been present at gatherings of people who, by the standards of the traditional culture, are thought highly educated and who have with considerable gusto been expressing their incredulity at the illiteracy of scientists. Once or twice I have been provoked and have asked the company how many of them could describe the Second Law of Thermodynamics. The response was cold: it was also negative.

After reading this, you cannot be surprised that the writer and essayist Charles Lamb (1775-1834) wrote: "In everything that relates to science, I am a whole Encyclopedia behind the rest of the world."

Is there any way to improve this situation? I believe there is: we have to start with young children and FOLLOW THE CHILDREN'S CURIOSITY! If they are interested in dinosaurs, talk to them about dinosaurs. If they are fascinated by space and by images coming from Pluto (Figure 1), talk to them about those topics first, rather than trying to teach them something they are not interested in. Not everybody should be a scientist. A society with no humanities would be unbearable. But every person living in the 21st century should have an appreciation of science and of the scientific method. 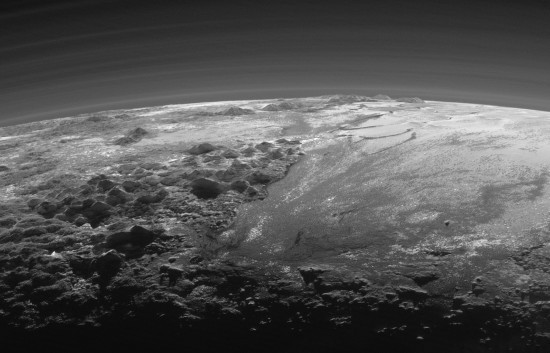