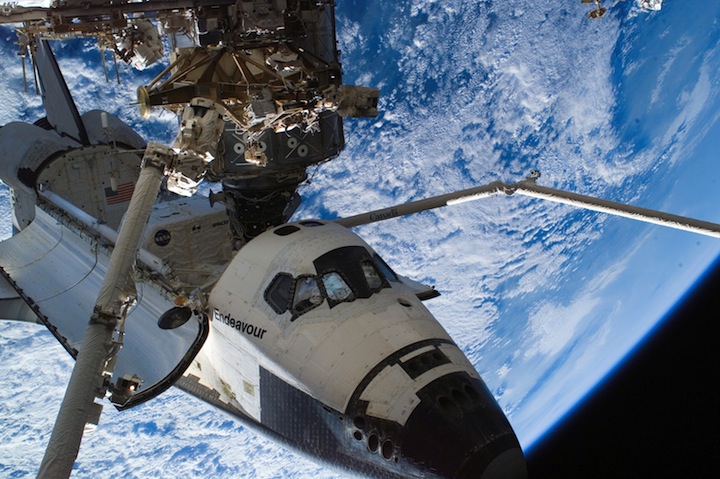 Endeavour in orbit on flight STS-118, August 15, 2007. For a breathtaking closeup of this photo, visit the cross-post at Blog on the Universe and click on the photo. Read more about this photo at NASA, and visit the STS-118 image gallery at NASA.

A different kind of countdown has begun. It is now 2010. Before the next New Year's celebration, the U.S. Space Shuttle program will be just a memory. Those that took pride in following along as this remarkable vehicle broke the surly bonds of Earth will surely feel they've lost a friend, and the pain of a very personal page turned forever will linger for quite some time. Those of you that follow news of the day as daily ritual, every so often hearing about a Space Shuttle blasting off or returning to Earth, will no longer experience that quick smile acknowledging pride in American leadership and technological prowess -- at least not when it comes to human spaceflight. (Are there really that many areas left where America excels?)

The older generations world-wide will tell children what it was like to see a Shuttle blast off. It's a sight that will be preserved in perpetuity on the internet, or whatever the internet will morph into. But in just 5 or 6 years we will be telling children about that time through which we lived when the Shuttle was flying -- and these children will have no memory of it, for they will have been born in the post-shuttle age. Soon, the ancient history of Apollo will marry with the ancient history of the Space Shuttle for this new generation.

You and I are not alone in our living memories of Shuttle. Half the people alive today didn't even know of a time when the Shuttle wasn't flying, all of them born after April 1981 when John Young and Robert Crippen piloted Columbia into space as STS-1.

What's the future for America in human spaceflight? The current long term plan for at least getting humans to low earth orbit -- which is where you'll find the International Space Station, a pretty hefty taxpayer investment -- is to hand responsibility over to commercial companies with no current track record of getting even a single human there. So I'd like to put those companies on notice here. You've got big shoes to fill, and a spacefaring nation that is watching. You need to do us proud.

Feel free to share your thoughts on the end of an era below.

Make Endeavour in orbit a teachable moment with your kids, or if you're a teacher, with your class. This is cross-posted at Blog on the Universe where you'll find links to essays and activities that powerfully address the science, history, and politics of human spaceflight -- all embracing the notion that science education is about conceptual understanding at an emotional level.