It looks like Halloween has come early this year for Wall Street Democrats. Costume season is months away, but the trend of Third Way types disguising their plans to gut Social Security as "progressive" is hotter than ever. Exhibit A: financial executive Robert Pozen, whose 2005 Social Security proposal was so "progressive" it earned the support of none other than George W. Bush.

No, Pozen's main argument for reform is that Social Security is "no longer progressive." Thus, progressives should warm to the idea of overhauling the program in order to restore it to progressivity. Pozen then offers a vague outline for "progressive reform" that is nearly identical to the Bowles-Simpson plan and various other extreme center-right reform proposals floating around: raise the retirement age, dramatically scale back benefits for the middle class, turn Social Security into a hated welfare program, and throw Democrats a bone with one minor revenue increase. Pozen's reform plan is at best two-thirds cuts, one-third revenue increases.

Many experts have already dissected the provisions of his plan in greater depth, so I'll save my breath.

Instead, I want to take down Pozen's mischaracterization of Social Security as "regressive" -- the claim upon which his entire case for reform is based. Because Social Security provides benefits to middle class people, and not just the poor like other programs, the myth that Social Security is no longer progressive is one falsehood in Pozen's column that could have sticking power.

Social Security was, and is still, progressive. Here's why: 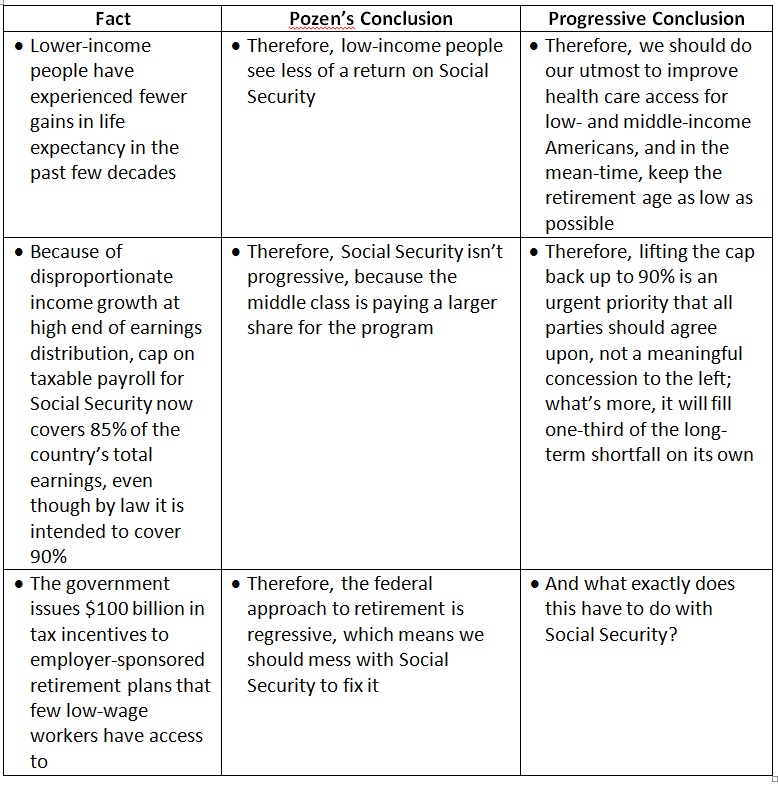 Social Security is the most successful, progressive antipoverty program in American history. In 2009 alone, Social Security lifted 20 million people out of poverty, and lessened the poverty of millions more. (Does that sound progressive to you?) That's why if there's any lesson to take away from Pozen's article, it is that we must be skeptical of center-right Democrats whose primary reason for "reforming" Social Security is that it is somehow "no longer progressive."

The truth is, progressives have already been leading the charge on progressive reform. For evidence of that, one need only look here, here, and here. It's just that Pozen's idea of "reform" isn't progressive at all.