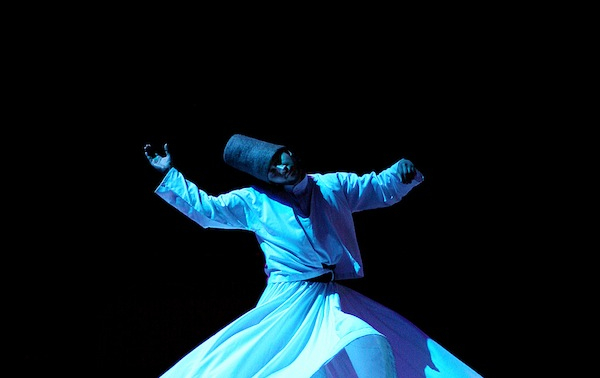 One day, you will find yourself outside this world which is like a mother's womb. You will leave this earth to enter, while you are yet in the body, a vast expanse, and know that the words, "God's earth is vast," name this region from which the saints have come.

Many of my fellow atheists consider all talk of "spirituality" or "mysticism" to be synonymous with mental illness, conscious fraud, or self-deception. I have argued elsewhere that this is a problem -- because millions of people have had experiences for which "spiritual" and "mystical" seem the only terms available.

Of course, many of the beliefs people form on the basis of these experiences are false. But the fact that most atheists will view a statement like Rumi's, above, as a sign of the man's gullibility or derangement, places a kernel of truth amid the rantings of even our most gullible and deranged opponents.

Consider Sayed Qutb, Osama bin Laden's favorite philosopher. Qutb spent most of 1949 in Greeley, Colorado, and found, to his horror and satisfaction, that his American hosts were squandering their lives on gossip, trivial entertainments, and lawn maintenance. From this Dark Night of Suburbia, he concluded that western civilization was so spiritually barren that it must be destroyed.

As is often the case with religious conservatives, whatever ignorance and "death denial" didn't explain about Qutb, sexual frustration did:

The American girl is well acquainted with her body's seductive capacity. She knows it lies in the face, and in expressive eyes, and thirsty lips. She knows seductiveness lies in the round breasts, the full buttocks, and in the shapely thighs, sleek legs--and she shows all this and does not hide it.

(Sayyid Qutb, The America I Have Seen: In the Scale of Human Values, 1951)

These are not words of a man who has discerned the limits of romantic attachment. Being terrified of women, and yet as concupiscent as bonobo, Qutb is widely believed to have died a virgin. We can feel his pain. Needless to say, his puritanical attachment to Islam allowed him to make a virtue of necessity: What a relief it must have been to know that the Creator of the universe intended these terrifying creatures to live as slaves to men.

But Qutb was not wrong about everything. There is something degraded and degrading about many of our habits of attention. Perhaps I should just speak for myself on this point: It seems to me that I spend much of my waking life in a neurotic trance. My experiences in meditation suggest that there is an alternative to this, however. It is possible to stand free of the juggernaut of self, if only for a moment.

But the fact that human consciousness allows for remarkable experiences does not make the worldview of Sayed Qutb, or of Islam, or of revealed religion generally, any less divisive or ridiculous. The intellectual and moral stains of the world's religions -- the misogyny, otherworldliness, narcissism, and illogic -- are so ugly and indelible as to render all religious language suspect. And I share the concern, expressed by many atheists, that terms like "spiritual" and "mystical" are often used to make claims, not merely about the quality of certain experiences, but about the nature of the cosmos. The fact that one can lose one's sense of self in an ocean of tranquility does not mean that one's consciousness is immaterial or that it presided over the birth of the universe. This is the spurious linkage between contemplative experience and metaphysics that pseudo-scientists like Deepak Chopra find irresistible.

But, as I argue in The Moral Landscape, a maturing science of the mind should help us to understand and access the heights of human well-being. To do this, however, we must first acknowledge that these heights exist.