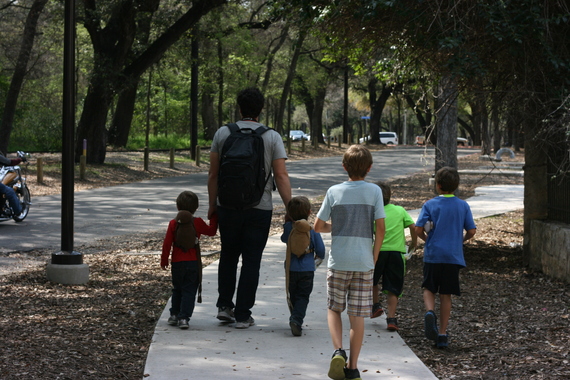 A couple of weeks ago, a kindergarten teacher at my boys' elementary school died tragically in a fire during the early morning hours before school. We received a note from the principal in the late afternoon hours letting us know what had happened and how it would be addressed the next day at school.

This was a first for all of us in our school community. Nothing like this has ever happened in this safe bubble in which we live. We have, up until now, been spared these hard conversations.

The morning after receiving this news, I walked my boys to school the same as I always do. We had told them about the tragedy the night before, leaving out the details that had come out in the morning papers and choosing only to tell them that a teacher they knew had died in a fire. My first grader stuck by me the whole walk to school, instead of running ahead like he usually does, and when we were almost at the schoolyard, he said, "Did she really die?"

"Yes, she did," I said. I tried to grasp for something else to say, but there are moments that simply have no words.

"How did she die in a fire?" he said. I could tell that he wanted a bit of reassurance that it would never happen to him, but this was something I couldn't give him.

"Sometimes fires start and people don't know it until it's too late," I said.

"So she died before the fire got her?" he said.

That was the end of his questioning at the time, but I knew he would have more for whomever would be talking to his classroom.

This boy's classroom shares a hallway with all the kindergarten classrooms, and every morning I walk him down the length of it to his door. This morning the everything about that walk felt different -- the air, the smell, the silence. The heaviness waiting for us was almost suffocating. Every single 5- and 6-year-old waiting in the hallways for school to start were quiet for the first time in history, probably. Teachers were trying to hold it together. Parents were hovering by their children. I could not look anywhere without tears burning the back of my nose.

None of my three boys who are in school had this particular teacher. I only passed her in the hallways. I didn't really feel like I was entitled to feel as sad as I did. But I'm the kind of person who can feel the heaviness and the overwhelming sorrow and see it on the faces of others and feel it as if it's my own. I turned away many times during that walk, because I did not want people to see me cry even though I had not known this teacher personally.

But on the walk home that day, I started thinking about sadness. We live in a world where the proper thing to do is hide our sadness. That's why there are so many people struggling with depression, which is just anger and sadness turned inward. We don't talk about these hard places in life, even though they're everywhere.

We are taught to believe that strength and perseverance and hope do not include brokenness. But that's simply not true. Our brokenness, our sadness -- they are the precursors to becoming strong and mighty. We step into our cracks and we kneel down and we pour our attention on them, and that is what becomes the superglue that puts us back together.

We do this alone and we do it together.

Our brokenness and sadness are not weaknesses. They are how we become strong and mighty.

When we turn away and hide our sadness or our mess or the hard places in our lives, apologizing that we can't get it together, what we're doing is denying others the opportunity to step into our cracks with us. To come alongside us and say, Hey, you're not alone. To take our broken pieces and and glue them back into place.

It's acknowledging our sadness, however deep it goes. It's talking about our sorrow, however founded or unfounded it may be. It's sharing our pain, our sickness, our burdens with one another and healing together -- whether that together is with friends, family or people you just met who share your own pain or sickness or the kind of burdens you carry.

Maybe some won't always take our brokenness the right way. Maybe sometimes they'll call us names or shame us or make us feel like we've done the exact thing we should never have done. But the only way to survive the hard places is to open them to the light. The only way back to strength is to acknowledge how this thing has weakened us. The only way out is through the cracks.

This is what I want my children to know in the aftermath of pain, loss, and the world continuing its turning: We are strong enough, together.

More:
Parenting Parentsmodern parentingtragedyparents-moms
Newsletter Sign Up
Raise the kind of person you'd like to know
Subscribe to our parenting newsletter.
Successfully Subscribed!
Realness delivered to your inbox