In 2004, Jared Cohen's curiosity about Iran took him to the heart of the country where, during late August, Humans of New York's founder, Brandon Stanton, photographed citizens living their everyday lives in cities like Tehran and Tabriz.

On September 3, 2015, Stanton's photographs portraying the reality of life for people in Iran snagged the attention of President Barack Obama, who left a personal remark on a photograph of a father and son. The photo's caption says that they were celebrating the boy's tenth birthday, and his father described him as a humanitarian, "He's a very emotional young man. He likes to solve other people's problems." 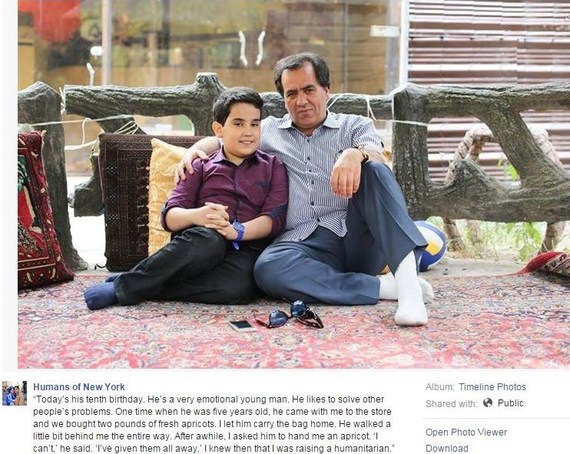 The president commented on Facebook that the photo really resonated and he would continue working to make the world a place where all young people will be able to live up to their full potential. The photographs from Stanton's visit to Iran have emerged against a backdrop of discussions in the U.S. about the Iran Nuclear Deal, which Senate Democrats recently prevented from being blocked by a Republican cloture vote.

Arguments by opponents of the deal are that lifting economic sanctions would fund Iran's nuclear program, leading to the eventual creation of a weapon, and that Iran cannot be trusted to uphold treaties of the agreement, according to a CNN poll.

However, "... the notion that this will be a game-changer with all this money funneled into Iran's pernicious activities misses the reality of Iran's current situation," said President Obama during a speech he gave at American University in August about the deal.

Partly because of our sanctions, the Iranian government has over half a trillion dollars in urgent requirements, from funding pensions and salaries to paying for crumbling infrastructure. Iran's leaders have raised expectations of their people, that sanctions relief will improve their lives. Even a repressive regime like Iran's cannot completely ignore those expectations.

Supporters of the deal say it will block major pathways to a bomb.

In a 2007 interview with ABC News, Cohen, who visited Iran and chronicled his travels in his book called Children of Jihad, described Iran as an anomaly among the Middle Eastern countries he visited because of the young population he found, and the pro-American values he said he saw reflected in the youth.

"After 9/11, I think somewhere in the back of my head, I always just had this lingering curiosity of what the Middle East was like," said Cohen.

Surrounded by a group of students at the University of Tehran back in 2004, Cohen writes that he received numerous questions about what Americans thought about Iran. Among the students, one woman spoke out from among the students.

"We watched what happened on September 11th," she said. "We saw it on television... You know, on that day, all of Iran wept for America. We felt like our brothers and sisters were suffering and we really wept."

"Post 9/11, there were a million Iranians holding peace vigils for the U.S.," said political psychologist Dr. Diane Perlman, back in late July of this year. She was present at Code Pink's White House rally for peace.

This year marked the 14th anniversary of the September 11 attacks on the World Trade Center and the Pentagon.

In remembrance of this tragedy, a moment of silence took place Friday morning at 8:46 a.m. at the White House. That afternoon, President Obama traveled to Fort Meade to hold a town hall meeting with service members.