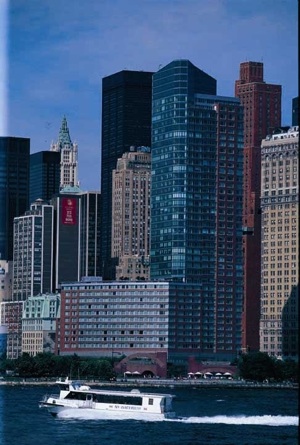 The words "rebirth," "re-energize" and "revival" are commonly spoken when referring to Lower Manhattan. But, 10 years after the horror experienced on September 11, 2001, the words have taken on more than just a somber and emotional element.

Since 2001, hotel and retail services increased 10%, and tourists and business travelers now have the choice of 18 hotels - triple the number that existed in 2001 -- with seven more new hotels slated for opening in the coming year, according to the Alliance for Downtown New York. Tourism has increased by nearly 30% in just the past two years, but as the 10th anniversary of 9/11 nears, the hospitality industry hasn't lost sight of its focus.

Lower Manhattan today is undeniably both a tourist destination, as well as Manhattan's financial heart. In addition to businesses headquartered in the area and the energy of the New York Stock Exchange, the 16-acre World Trade Center site is currently under construction and will include five new skyscrapers, One World Trade Center and the Memorial Museum (set to open 2012), as well as restaurants and retail stores. Aside from the $20 billion being invested in the new World Trade Center area, an $875 million project by Frank Gehry will see the tallest residential building in New York (set to open in 2012), and in 2014, haute couture moves into Lower Manhattan when the fashion moguls at Condé Nast move their headquarters into One World Trade Center. The new development is not only a tourist attraction, but will force a surge of employment opportunities and attract more business to the area.

The suits that adorn the patrons of cafes, restaurants and sidewalks on Wall Street and in Battery Park City now mingle with tourists donning "I LOVE NY" t-shirts, and leisure travelers with cameras wrapped around their necks and maps pointing in all different directions. Ten years ago, those who stayed at a hotel in Lower Manhattan probably didn't notice the view, but today, the views of the Statue of Liberty across the water or the Freedom Tower from the guest room window is a stark reminder of the resiliency of New York.

NYC & Company, the official marketing, tourism and partnership organization for the City of New York, in collaboration with Mayor Michael Bloomberg, launched a communication campaign earlier this year to promote Lower Manhattan to visitors. The Get More NYC: Lower Manhattan, which was designed to illustrate the recovery and revitalization of Lower Manhattan in the last decade, started June 1 and encourages visitors to stay in Lower Manhattan's hotels, eat in its restaurants, shop in its stores and take advantage of the Lower Manhattan experience.

"A crucial part of the story of September 11th is how Lower Manhattan - an area many people said would turn into a ghost town - has come back in the past 10 years," said New York City Mayor Michael R. Bloomberg, in a press release. "People from across the country - and around the world have contributed to its revival, and now we want our visitors to see that full recovery for themselves. Lower Manhattan is where the first chapters in the remarkable story of New York City were written four hundred years ago. And it's where the next installment of New York City's story is being written today."

"We changed the name to appeal to business and leisure travelers," said Kathleen Duffy, spokesperson for New York City Marriott hotels. "Business travel curtailed and leisure travel was down, but we had to remain viable. People started coming back, and there was a lot of 'patriotic leisure travel'" that Duffy said helped revitalize the dour mood of the area. Just this week the hotel received the flag that was originally hung in the New York Marriott World Trade Center Hotel and is now prominently displayed in the lobby of the Marriott Downtown. There were challenges along the way, "but the opening of the memorial and the museum is bringing leisure travel back to Lower Manhattan."

"People [in the area] are saying less 'Ground Zero' and more 'the Memorial'," said Duffy. "It's a shift in mindset. It's a turning point. Once the memorial is open to the general public, I think it's going to bring an enormous amount of leisure travel to Lower Manhattan."

At The Ritz-Carlton Battery Park, hotel employees are gearing up for an rush of guests and tourists as the 10th anniversary of 9/11 approaches. The hotel, which was slated to open in October 2001 but officially opened its doors on January 27, 2002, stands to many as a symbol of the revival of lower Manhattan.

"Initially, when we first were built we had unobstructed views of the World Trade Center site and people would sit and watch the rebuilding of the area from the Club level," said Nicole La Valette, Director of Sales and Marketing for the Ritz-Carlton, Battery Park. Over the years, more residential buildings were built, obstructing the views, which La Valette says was actually a good thing. "It was a sign of the revival."

Today, guests who once requested views of Ground Zero from their hotel room are now offered an equally dramatic view. From the hotel you can see clear to the Statue of Liberty, a symbol of hope and resilience.

"There's a lot more residents and tourists in the area now, and the activity in downtown is positive for our employees and our guests," said La Valette. "The redone parks and new restaurants, and talk about new retail stores -- people feel like they are in a good place right now. Despite everyone saying it's going to be a ghost town, it's hasn't proven to be."

The soon-to-be open Conrad New York, located at 102 North End Avenue, will be the hotel group's first property in New York, and Lower Manhattan was an easy choice, said Robert Rechtermann, General Manager of the Conrad New York. "The neighborhood has so many new restaurants, shops and businesses opening that it's becoming a destination in and of itself." To add to the mix, the new Conrad will feature high-design "green roof", complete with a bar, a garden and river views.

It's true that staying in the Financial District doesn't have the same flashy appeal as Times Square or elegance of the Upper West Side, but Lower Manhattan nevertheless embodies the best of New York's effortless attitude, and it's got a serious cool-factor. Nowhere else in Manhattan can you get a glimpse of the Brooklyn Bridge and the Statue of Liberty in one spot or walk Wall Street and end your day bar-side in Tribeca. Sure, you'll have to navigate through construction cranes and orange cones, and the sound of jackhammers will likely provide the background music to your leisurely stroll through Battery Park, but in a way it's almost inspiring -- the construction you're walking through, the hotel you're staying in, or the restaurant you're ordering from form pieces of history that tell a riveting story about a powerful past that made way for positive future.