Change the channel! Better yet, turn off the television. Such is the advice artist, director and producer, Adu has for anyone serious about following and engaging in social justice initiatives. For him and countless other activists the digital realm--as evidenced by the #BlackLivesMatter movement--offers the most hope for igniting change on topics such as race, class, and police brutality.

To get his message across, Adu has partnered with the African American Museum of Dallas for the exhibition African Amedia. Combining performance, photography, video, and mixed-media paintings, Adu installed a fictional television network that captures and counters some of the negative representations used to denigrate African-Americans.

We spoke with the Dallas, TX resident about his project, digitizing the revolution, the role of the visual artist in supporting #BlackLivesMatter, and why the current wave of television diversity is not enough.

The performance piece aspect of your show suggests that the revolution will be "digitized." In what ways do you see social media campaigns designed to balance media representation of Black people as particularly effective and meaningful?

Adu: Saying that the revolution will be digitized was inspired by the fact that through the use of camera phones and social media platforms the awareness of police brutality and social injustice has gained national attention. For the longest, news outlets along with television programs have been in control when it comes to telling different stories affecting our country. But I believe that the citizen journalism we are witnessing now is more important than ever due to recent situations of news being told inaccurately, video footage being edited, and misinformation. Instead of wondering what happened, citizen journalism and the public court of opinion forces these first-hand accounts to be taken into consideration. 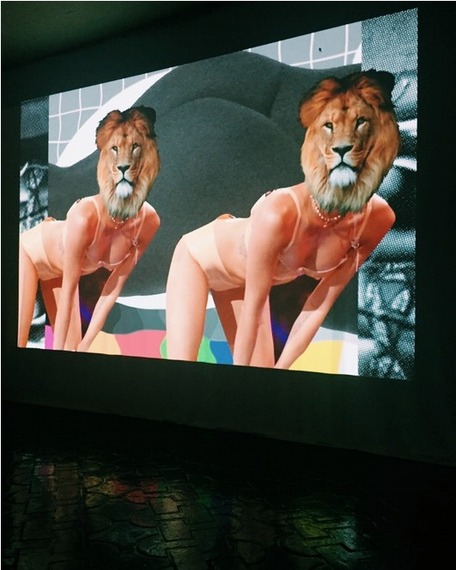 As an artist how does the visual images you create support this idea of a digital revolution?

Adu: We are living in a very visual age from memes and gifs to emoticons. As an artist it is important for me to create visuals that will create a conversation that will have an impact on the world. In my exhibit there is an installation of televisions showing all of the recent videos of African-American men being killed. It is showing people that this is an issue that we are continuously dealing with over and over again. The symbolic images that I have created in African Amedia and my other artwork serve as my silent protest.

Often the images the media feeds us are ones of tragedy. How does this exhibition explore that while at the same time trying to uplift and celebrate beauty and black joy?

Adu: While the exhibit does focus on the tragic state of our country in regards to police brutality and social injustice, the exhibit also serves as a reminder to the tons of millennial activists that what they are doing is bold, brave and honorable. They must remain strong just as so many of our ancestors before us. 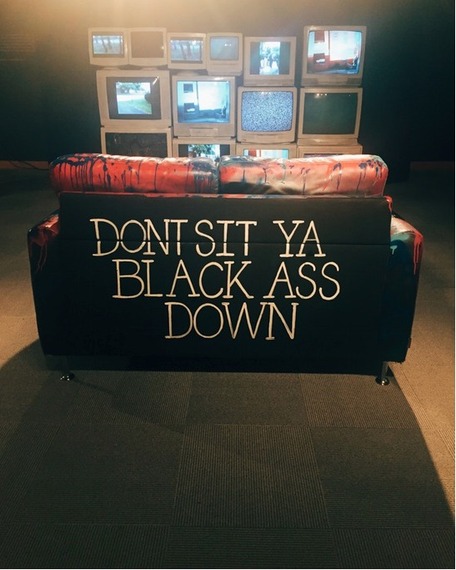 Recently the television industry has been receiving kudos for increasing and diversifying its representation of people of color. Do you find hope in these images?

Adu: As much as I appreciate the vast array of stories being told through television we still have a lot of work to do. I do appreciate the different personalities and plots being shown to viewers. However certain networks continuously show a skewed image of African-Americans in a negative light especially as it pertains to reality shows. It is going to be up to African-Americans to seek leadership positions in entertainment and marketing in order to make sure that we are telling our own stories.